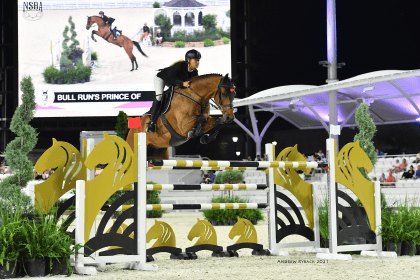 Saturday evening’s $75,000 Yellow Pony Pub & Garden Grand Prix showcased top equestrian sport under the lights in the Grand Arena as 65 entries competed for top prize. Peter Grant of Canada designed the technical track that featured a skinny vertical bending to a challenging triple combination. Eighteen entries advanced to the jump-off, but it was Kristen Vanderveen and Bull Run’s Prince Of Peace (Cardenio x P-Comtesse) that snatched the win.

Kristen Vanderveen and Bull Run’s Prince Of Peace won multiple Grand Prix at World Equestrian Center – Ocala during the venue’s inaugural Winter Spectacular circuit. “I have had Prince of Peace for quite a while, almost four years and he is quite the character. He has a really strong personality and can be kind of rambunctious, but I think those quirks are what really makes him special,” said Vanderveen.

Vanderveen liked the options that the first course presented. “He can get a little spooky under the lights and jump the fences rather high, so the shorter lines suited him really well.” Vanderveen and the 12-year-old Holsteiner gelding delivered a flawless first round, soaring to the top of the standards to stop the clock at 78.246 seconds, well under the time allowed of 82 seconds.

Vanderveen was ready to go as fast as possible. “He [Bull Run’s Prince Of Peace] really likes these big rings where he can really run. That is a real strength of his. With there being so many in the jump-off, it was good for him to just go on a flat gallop and let it out to build up his confidence,” said Vanderveen.

Vanderveen and Bull Run’s Prince Of Peace started the jump-off strong and fast, galloping from fence one to fence two in just eight strides. Vanderveen rolled through the rest of the course, never having to pump the brakes. “On a straight flat gallop, he is amazingly brave and will try from anywhere.” Vanderveen and Bull Run’s Prince Of Peace flew to the Lugano Diamonds oxer, to stop the timers at 42.076 seconds.

The last entry in Saturday night’s $75,000 Yellow Pony Pub & Garden Grand Prix jump-off was Tracy Fenney and MTM Apple (Favorit Ask x Kong’s Whopsie), who won the $15,000 WEC Welcome Prix earlier this week. Fenney and the 10-year-old Danish Warmblood mare, MTM Apple, started the jump-off strong, slicing the first fence for a nice angle to fence two. The pair bolted through the rest of the course, stopping the clock at 43.156 seconds to round out the top three.

An additional $5,000 was awarded to Rowan Willis and Blue Movie, the fastest four-faulters of tonight’s $75,000 Yellow Pony Pub & Garden Grand Prix. Their first round time of 71.764 seconds was almost two and half seconds faster than the second four-faulter in the first round.

Saturday afternoon’s $10,000 WEC Ocala Futures Prix saw a field of 33 entries vying for the win over a course build by Peter Grant of Canada. The winding track featured a double combination and a triple combination. Sixteen entries found clear first rounds but only seven managed to jump double clear, with Olympic rider, Santiago Lambre and his own The Diamant Rose Z taking the class by almost three seconds in the jump-off.

Last to enter the ring, Lambre and new mount The Diamant Rose Z (Diamant Z x Toulon) produced a quick and clean first round stopping the clock at 75.130 seconds.

Lambre shared his strategy, “I was the last to go, so I saw how many strides previous riders did, so I knew what I had to do to win the class. For the last two fences, I went really fast before the second to last jump so I could wait in the last [bending] line,” said Lambre.

Lambre and the 10-year-old Zangershiede mare advanced to the jump off immediately, delivering tight turns and forward distances to stop the clock at 36.463 seconds, more than two and half seconds faster than second place finishers, Roberto Daza and Bella Olympic.

Roberto Daza and his own Bella Olympic started off strong, producing a clean first round in 72.988 seconds, well under the time allowed of 79 seconds. Daza and his careful Dutch Warmblood mare advanced straight to the jump-off, taking inside turns to stop the clock at 39.016 seconds with all rails up.

The third place finishers, Shawn Casady and Two Socks Farm LLC’s Quentin VA were early leaders in the class. Casady and Quentin VA found previous success in the class, being the sixth place finishers in last week’s Futures Prix. The pair produced a quick and clean first round, soaring to the top of the standards to stop the first-round timers at 73.829 seconds. Casady and the eight-year-old Holsteiner stallion started the jump-off strong, leaving out a stride from fence one to two. Casady and Quentin VA (Quarz x Trixie) galloped through the timers stopping the clock at 39.745 seconds, just behind Daza and Bella Olympic.