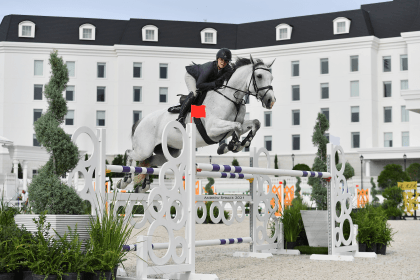 The course featured a winding track that included a double combination and a large triple bar to a triple combination. Twenty-three competitors qualified for the jump-off but only nine entries produced a clear jump-off round. Not one pair could best Tracy Fenney and MTM Apple. Fenney won the $15,000 WEC Ocala Welcome Prix just last week with MTM Dolce Vita.

Fenney, of Flower Mound, Texas, and the 10-year-old Danish Warmblood mare, MTM Apple, navigated a clear first round, soaring to the top of the standards, stopping the clock at 80.966 seconds, just under the time allowed of 81 seconds.

Fenney and MTM Apple (Favorit Ask x Kong’s Whopsie) advanced straight to the jump off. The pair opted for a tidy inside turn from fence 10 to 11 and from fence 15 to 16. “Everyone thinks she’s a big slow girl because she is big and stout. Everyone thinks look at this horse coming in, as she is just moseying into the ring super relaxed, but then she just kicks into another gear,” said Fenney.

The beginning of the jump-off was a bit tricky for MTM Apple, “She turns left great, but her right turns aren’t as good. So, I worried about that from one [fence 10] to two [fence 11] because that was a pretty hard turn. Then it was a little rough to make her get up because she stayed crooked jumping it, then I had to gas it a little bit to get the eight [strides to fence 12] done. Then she kicked into gear and got rolling.” Fenney and MTM Apple galloped to the last fence, stopping the clock at 42.573 seconds for the win.

Though none were able to catch Fenney and MTM Apple’s time, Diego Perez Bilbao and ABC Quantum Cruise (O.B.O.S Quality 004 x Ardnehue Diamond Cruiser) were just behind the winning pair coming in toward the end of the order. The pair earned third place in last week’s $15,000 WEC Ocala Welcome Prix and fourth place finishes in Week II’s Welcome Prix and $75,000 Calluna Spa Grand Prix. Bilbao and Wyndmont Inc.’s ABC Quantum Cruise the 12-year-old Irish Sport Horse gelding, delivered a clear and fast first round, stopping the timers at 77.834 seconds. Bilboa and ABC Quantum Cruise advanced straight to the jump-off, taking a multiple inside turns, to stop the clock at 43.310 seconds to earn second place.

Kris Killam from Naples, Florida and Gangster CHS owned by Helen Jones of Top Horses LLC, rounded out the top three. Killam and the 10-year-old KWPN gelding produced a fast first round time of 77.808 seconds, qualifying the pair to advance straight to the jump-off. Killam and Gangster CHS (Eldorado Van De Zeshoek x Cute Girl) manufactured a speedy jump-off, walking down the lines to stop the timers at 43.339 seconds to earn third place in this morning’s $15,000 WEC Ocala Welcome Prix.