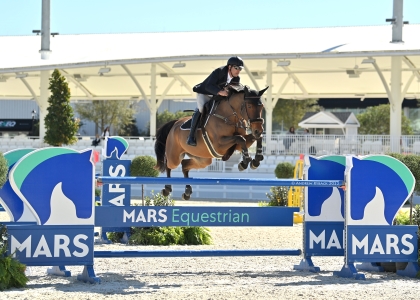 Lambre was thrilled with Cetano Van Aspergem Z’s performance today, “This was his first show back since April. I just started getting him back in shape about three months ago after he was on field rest for seven months. Today, he showed that he was ready to go.”

Lambre and the speedy Cetano Van Aspergem Z delivered a faultless first round, jumping each fence with ease to stop the first-round clock at 81.848 seconds. Lambre and the 13-year-old Zangershiede gelding advanced straight to the jump-off, “There was an inside turn [before the MARS Equestrian double combination] that no one else did and Cetano Van Aspergem Z has so much scope that I knew he could do it. I think that’s where I had the time.”

Lambre and Cetano Van Aspergem Z started off on a strong gallop walking down the first line in seven strides to quickly roll to the liverpool oxer. The pair landed left and took the inside turn that no other competitor attempted to soar over the oxer to land right to jump the green vertical. The pair flew to the Mars Equestrian double combination, to streamline to the last vertical in six strides to stop the jump-off clock at 37.208 seconds.

Jared Petersen and Marcus Gruenthal’s Centolino Clasico earned the second fastest jump-off time in today’s $10,000 Buckeye Nutrition Futures Prix. Petersen and the Holsteiner gelding delivered a very fast first round, leaving all rails up to stop the first-round clock at 75.813 seconds, well within the time allowed of 85 seconds. Petersen and Centolino Clasico jumped-off immediately, jumping the first line with ease to roll to fence three in twelve strides. The pair opted to go in between the MARS Equestrian double combination to soar to the next oxer. The pair flew through the rest of the course on a flat gallop, not having to pump the breaks once to stop the jump-off clock at 37.892 seconds.

“Fenise is a fantastic horse. He’s 18.1hh so he’s a pretty big horse, but he’s super adjustable which worked in our favor on Friday. He’s able to gallop into a combination and shorten up his stride pretty easily which is rare for a horse his size. He’s just getting back to where he needs to be fitness wise, and hopefully soon he will be here for the Saturday night Grands Prix,” said Tynan.

Tynan and the now 12-year-old KWPN gelding produced a lovely first round, soaring to the top of the standards to stop the first-round clock at 81.077 seconds, well within the time allowed of 84 seconds.

The pair advanced straight to the jump-off, “My plan was to go as fast as I could. There was a roll back from the stone standard oxer where I was super quick back to the double combination. Then I left one out and did six in the last line. After that, I just used his step and galloped home.”

Tynan and the scopey Fenise, flew around the entirety of the course leaving out strides while taking tight inside turns to stop the jump-off clock at 41.782 seconds, to ultimately earn first.

Vicente Guillen and Tranquility Farm’s Rustica LS LA Silla (Rubens LS x Escarlata LS) captured the second place spot. Guillen and the nine-year-old LA Silla mare produced a smooth first round to stop the clock at 82.378 seconds. The pair jumped off immediately, flying from fence one to two in nine strides to land left to soar over the large oxer. Guillen and Rustica LS LA Silla galloped to the double combination in 15 strides to take a tight turn back to the last line. The pair raced through the remainder of the track to stop the timers at 42.929 seconds.

Bryn Sadler and Showcase 81, LLC’s Cezarro (Cesaro x Nabell) rounded out the top three in the $12,500 WEC Ocala 1.40m Jumper Classic. Sadler recently earned the top spot in last week’s $15,000 1.45m Jumper Classic aboard her other mount Cinven CR. On Friday, Sadler and Cezarro navigated a quick first round, not touching a single rail to stop the clock at 81.980 seconds. Sadler and the 14-year-old Brandenburg gelding advanced to the jump-off taking very tidy inside turns to secure a time of 43.925 seconds, to bring home the yellow ribbon.