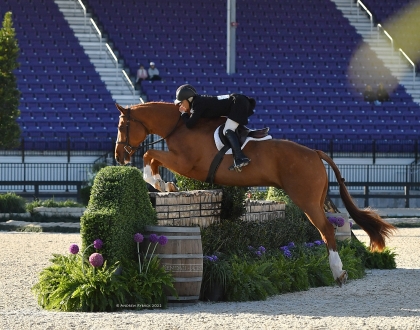 Twelve entries contested the $20,000 WEC Ocala 3’6”-3’9” Hunter Derby with scores soaring into the high 80s. The flowing tracks gave competitors multiple opportunities for inside turns and allowed entries to show off their horses’ brilliance, but it was Holly Shepherd and Debbie Holland’s Tybee that caught the judge’s eye.

Shepherd and the 15-year-old Hanoverian gelding by Black Tie navigated a lovely first round while jumping three high options to earn a first-round score of 86. Shepherd really enjoys riding Tybee, “He’s one of the best hunters I’ve ever ridden. He really likes jumping bigger jumps, so I am always anxious to jump the high options. Sometimes I wish the jumps were bigger, he doesn’t really get to show off too much when they are on the smaller side.”

Shepherd and the scopey Tybee were the second to last pair to return for the handy, “He tends to be a little dull out of the gate, so I tried to start off on a strong gallop. I was jumping fence one blind because the sun was starting to set, and it was right in my vision, but he handled it very well and jumped super anyways. Then we jumped the fence on the end and he rolled back beautifully to the wall and trotted the trot jump like a million dollars.”

Shepherd and Tybee floated through the remainder of the course while jumping all four high options to earn a score of 90, for a two-round total of 176.

Second place was captured by Dorothy Douglas and Abigail Davenport’s MTM Lolah LOL (Los Angeles x Palma). Douglas and the now nine-year-old Westphalian mare have earned numerous top placings at World Equestrian Center – Ocala, recently taking home a win in the 3’6”-3’9” Hunter Derby during the Ocala Fall Show Series. Douglas and MTM Lolah LOL continued their success, delivering a smooth first round while jumping all four high options with ease to earn a score of 82. The pair returned for the handy, delivering multiple inside turns while taking all four high options to earn the class’s highest handy score of 91, for a two-round total of 173.

Josh Dolan and Belle Rolfe’s Ipanema (Verdi x Alliance) took home the third place ribbon in today’s $20,000 WEC Ocala 3’6”-3’9” Hunter Derby. Dolan and the stylish Ipanema produced a stunning first round, jumping all four high options to secure a score of 87. Dolan and the nine-year-old Swedish Warmblood gelding were the last pair to return for the handy, completing multiple inside turns and jumping all four high options to earn a score of 84, for an overall score of 171.

Thirty-eight horse-and-rider combinations took to the WEC Stadium early this morning to contest the $15,000 WEC Ocala 3’ Open Hunter Derby. Competition was fierce with scores soaring into the 90s, but it was Hillary Johnson and Copper Fox LLC’s Suede (Los Angeles x Petite Fleur) that captured the win with the highest overall score of 184.

Johnson was excited to get to get back into the WEC Stadium, “I felt pretty confident going into the stadium today. We did a few out here last year and [Suede] loved it. Coming into a big atmosphere like this is so much fun for him.”

Johnson and the now eight-year-old Westphalian gelding were the last pair to return for the handy, starting on a nice canter to fence one to turn left to fence two. The pair floated through the rest of the course taking multiple inside turns while jumping all four high options to earn a handy score of 93, for a two round total of 184.

“Suede was fantastic today. He is a very quiet horse so I had to make sure to keep the power even when making the inside turns. I really enjoyed having a few different options out of the turns; if you needed a little extra space or not,” said Johnson.

Erin-McCabe Clayton and Cecilia Halsey’s Griffin rounded out the top three in today’s $15,000 WEC Ocala 3’ Hunter Derby. Clayton is well known at World Equestrian Center – Ocala taking home multiple top finishes during Ocala’s 2021 NSBA Summer Series. Clayton and the 11-year-old Warmblood gelding delivered a stunning first round, jumping all four high options to secure a score of 89. The duo returned for the handy, starting on a right lead to make a tricky turn back to fence one, to land left and roll to fence two. The pair cantered rhythmically through the remainder of the course to earn a score of 89, for a total score of 178 to earn third.

Early this morning, 38 stunning hunters vied for the win in the $15,000 WEC Ocala 3’ Jr/Am Hunter Derby but it was Nicole Lyvere and her own Vaillero (Vaillant x Highlight Z) that secured the highest overall score of 179.

Lyvere and the 14-year-old Zangersheide navigated a flawless first round, easily jumping all four high options to earn the class’s highest first round score of 90. Lyvere had a successful day, also earning The Style of Riding Award presented by Bill Rube.

Lyvere was very proud of Vaillero today, “Squishy [Vaillero] is the best. When I first got him, I had a really hard time riding him. So, I’ve spent a lot of time learning with him because he would get super nervous when he went in the ring. I think we are finally at the point where we are familiar with each other and today it all clicked.”

Lyvere and Vaillero returned for the handy, “I am never one to play it safe. I went in there trying to be as handy as possible. He gets a bit trickier to ride during the handy, but he was amazing today. I am super happy with him. I think we finally got all of the pieces together.”

Lyvere and Vaillero completed a lovely handy round, taking each side turn with ease while opting to take each high options to secure another high score of 89, for a two round total of 179.

Devin Seek and Mr. and Mrs. Douglas Wheeler’s Citation (Thunder Van De Zuuthoeve x Argenta VD Berghoeve) snagged second place honors. Seek and the eight-year-old Warmblood gelding delivered a smooth first round, jumping all four high options for a score of 89. The pair returned for the handy, opting to take numerous inside turns to earn a score of 88, for an overall score of 177.

Rory Caskey of Austin, Texas and Nourah Caskey’s Cassio earned the third place spot in today’s $15,000 WEC Ocala 3’ Jr/Am Hunter Derby. Caskey and the 12-year-old Warmblood gelding produced a beautiful first round, jumping one high option to secure a score of 85. Caskey and Cassio came back for the handy, flowing through the course while jumping all four high options to earn a score of 83.5, for a total of 168.5 to earn third.

Before the start of the handy round in the $15,000 WEC Ocala 3’ Jr/Am Derby, Bill Rube presented the prestigious Style of Riding Award to Nicole Lyvere for her classic style and her sportsmanship. The recipient serves as a role model for preserving the integrity and tradition of equestrian sport. “This award is very special to me because the recipient of this award pays it forward both in and out of the show ring,” says Rube. Johnson received an elegant duffel bag and wore a white rose corsage on her lapel throughout the handy round to signify her achievement.