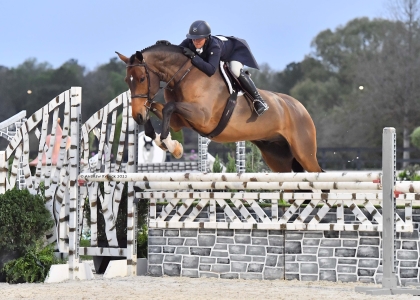 The $20,000 WEC Ocala 3’6”-3’9” Hunter Derby saw competitive field of 19 entries compete for the ultimate prize over Patrick Rhodes natural tracks, but it was Samantha Schaefer and Madeline Schaefer’s In The Know  (Arkansas x Cavelle) that earned their third 3’6”-3’9” Hunter Derby win of the 2022 Winter Spectacular Show Series.

Schaefer and the 12-year-old Warmblood gelding were the last pair to try their hand at the first round course, yielding an effortless first round to earn a high score of 92.

“Spyder [In The Know] was quite fresh this morning. I took him out earlier in the afternoon to stretch his legs and he was still pretty fresh, so I kept saying to myself, he’ll be fine. He ended up holding it together very well. The first course rode very nicely for him,” said Schaefer.

Schaefer and In The Know returned to Hunter 1 under the lights for the handy, “I saw some riders before me do some tricky inside turns, but I thought it was better for him in this ring to just try and be smooth. I didn’t want to twist him around and take a risk, especially with the eerie storm weather heading our way. So, I focused on consistency and showing off his amazing jump.”

Schaefer and In The Know navigated a foot perfect handy round to earn a score of 91 for a two round total of 183.

Twenty-five stunning hunters gathered at Hunter 1 early this morning to vie for the win in the $15,000 WEC Ocala 3’ Open Hunter Derby but, it was Jenny Miller and her own Aladdin that emerged victorious.

“Aladdin is my personal horse. It’s really amazing that WEC offer’s 3’ professional derbies because that’s all Aladdin does. He’s eligible as a first year horse, but he just shines in the derbies. I usually do a practice class on Thursday to get the spice out, then he comes to the derbies and has been knocking on the door,” shared Miller.

Miller and the 10-year-old Hanoverian gelding delivered a gorgeous first round toward the end of the order, jumping all three high options with ease to earn the judges highest first round score of 90.

Miller spoke about the first round course, “The first course felt so long, I couldn’t breathe by the end,” laughed Miller. “The course did offer multiple places where you were able to take a breath and relax a bit, so the horses were able to jump better.”

The pair returned for the handy, navigating a smooth round, seamlessly floating through the turns for a score of 88, and a total score of 178. Miller also secured the third place finish aboard MTM Nabilli, owned by Erica Prockow.

“The handy round felt very quick. I didn’t get nervous because it rode so fast. My horses were slick, and they just turned, it flowed very nicely. On my other horse, Nabilli, I did some really hard inside turns which is why he moved up in the class. Overall, I am super happy with both horses,” expressed Miller.

“I also wanted to shout out Bob Crandall and Kim Perlman who have been holding my hand and been amazing to me,” said Miller.

McQuaker and the nearly seven-year-old Oldenburg gelding produced a beautiful first round, opting to take all four high options to earn a score of 82 from the judges.

McQuaker and Golden Ticket returned for the handy, taking tidy turns and maintaining a forward rhythm throughout the course to earn a score of 83, for an overall score of 165.

“I really liked the courses today. They were designed very well. I liked the trot jump and the turn to the hedge jump in the middle of the ring was very fun. The big oxer at the end of the course was also very fun. Golden Ticket was such a good boy today,” expressed McQuaker.

Before the start of the handy round in the $15,000 WEC Ocala 3’ Open Hunter Derby, the prestigious Style of Riding Award was presented to Kyle Muckler for his classic style and his sportsmanship. The Style of Riding Award is generously presented by Bill Rube to be awarded to the rider who best displays the American Style of riding in the ring and sportsmanship outside of the competition arena. The recipient serves as a role model for preserving the integrity and tradition of equestrian sport. “This award is very special to me because the recipient of this award pays it forward both in and out of the show ring,” says Rube. Muckler received an elegant duffel bag and wore a white rose corsage on his lapel throughout the handy round to signify his achievement.