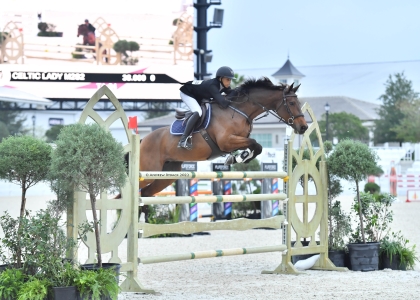 Klimas and the 15-year-old Dutch Warmblood mare navigated a seamless first round in 74.496 seconds, well under the time allowed of 84 seconds.

Celtic Lady M2S is a longtime partner for Klimas, “I have owned ‘Gracie’ since she was a seven-year-old. I really took my time developing and training her. She’s always been a sensitive hot horse, so I was very patient. We started out doing the 2’ Jumpers at HITS a long time ago, and now we are at the grand prix level.”

Klimas was determined to win today’s class, “Today, I had my game face on. I showed on Wednesday, but it was a bit sticky, so I felt like we needed to step up our game today, especially with today’s competitive class,” said Klimas. “I focused on my pace and riding the track well. My mare was super responsive on course, so we were able to gallop our way down the lines.”

The pair soared through the timers stopping the clock at 36.025 seconds for the win.

Klimas is very proud of Celtic Lady M2S, “She’s the first horse that I trained up through the grand prix all by myself, so it’s a great feeling to have such a nice ride. It was a journey for both of us and now we are glued together.”

Bree Rosales and Gail Dady’s California PJ (Chacco Blue x Evita) secured second place. Rosales and the 11-year-old Hanoverian mare found an efficient first round in 77.292 seconds. The pair went straight to the jump-off flying around the course to stop the clock at 37.052 seconds.

Megan Wexler and Golden Oaks Farm, LLC’s Doo-Wop (Camaro M x Hilda) earned the third-place spot on the leaderboard during this morning’s class. Wexler and the nine-year-old Swedish Warmblood gelding produced a smooth first round in 77.849 seconds to qualify for the jump-off. The duo jumped-off immediately taking tidy turns in 39.113 seconds to round out the top three.