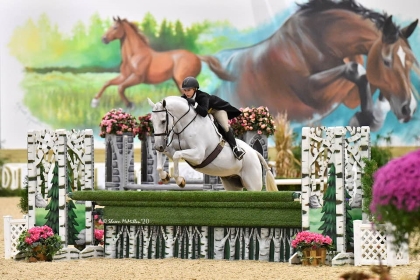 WEC: How did you get started riding?

I started riding when was 8 at Champagne Run in Lexington, Kentucky.  I was not from a horsey family. Growing up in Lexington, horses were everywhere and I asked and asked to ride. My mom finally gave in. So, I started taking lessons at Champagne Run and just went forward from there focusing mostly on riding Children’s Hunters throughout my Jr. career. As soon as I started, my mom was always extremely supportive of my riding.

WEC: Fast forward, who do you ride with now?

Now I ride with Diana Conlon of Olive Hill Sporthorses in Lexington, Kentucky. Diana and I actually went to college together and we have been friends ever since.

WEC: You’re a physician. How do you find time to ride?

I’m a family medicine physician. I’m lucky that I mostly work at an outpatient clinic so

I ride after work, and on weekends. I work a second job at the state mental hospital to pay for showing.

Diana is so flexible with me so if I can ride a bunch in a week or if I cannot come out for two weeks, she understands my schedule and I really appreciate it. If I don’t have something to ride for some reason, she fills in the gaps.

I have three horses through my Happy Pony, LLC. The first is my 20-year-old horse. Devout is his show name and Tyco is his barn name. Devout (Oh Star x Indiscreet) is an American bred Holsteiner/Selle Francais cross. He was bred to be a jumper but has spent his days with me as a hunter. I have had him for 7 years. I am still in touch with the people in California that bred him.  He just kept going and going. This summer he had a little trouble at the big oxers, so he will likely step down from the 3’3″ classes now. He’s very special, he’s been my horse of a lifetime and he won’t want to retire completely, so he won’t leave the barn.

This week I’m showing my six-year-old here at WEC Ohio. He came with the name Lance, so I did a little research and found that Arondight is the name of Sir Lancelot’s sword, which is fitting because he is steel gray and so I chose HP Arondight as his show name.

Lance has only shown a couple times. We imported him in April, and have taken some time to get him ready to show. It paid off because, we won a class yesterday in the Adult Hunters! He is a Dutch Warmblood (Grandorado TN x Unaniem) and he is 17.2. He is going to be an equitation horse, because he has a huge step and he will just jump around. Hopefully, he’ll be a Big Eq horse in the future. In the meantime, he’ll do the Adults with me.

And, I just bought a 4-year-old – we bought him off a video – and he just arrived at the farm in Kentucky yesterday so I haven’t even met him yet. He is 16.2, bay and he is more of a hunter-type. He will hopefully end up replacing Tyco for me. His name is Nightfall, and he’ll go by Knight in the barn.

We bought Lance off a video too, just because of the travel restrictions with Covid, it was just easier and worked out well.

WEC: How frequently do you show?

Twice a month to once every two months depending on my schedule. I primarily do the Adult Eq and the Adult Amateur hunters. In the past couple of years, I went to Ariat Medal Finals twice. This year, I went to the THIS Adult Equitation Championships at the National Horse Show and we made it to the call back round. Tyco wasn’t feeling up to it, so I had to borrow a horse. Diana found me a horse to ride, she does him in the Futures Prix – his name is Mr. Miller. I had only showed him a couple of times he jumps big and hard. It was my first time getting a call back in a major finals event and I wasn’t expecting that much because I was on a borrowed horse. It was very fun and overall was a great experience.

In 2022, we showed at WEC Ohio in the spring, summer and fall and we’ll do some of the December weeks too and a week in January before we go to Ocala. For the last two years we’ve gone to Ocala in the winter. Last year we went down for multiple weeks. This year we are going to go for five-weeks. I’ll be able to go down for two weekends, come home and work and then go back down.

Thank you, Larissa, for taking the time to speak with us. We wish you continued good luck with your stable of handsome geldings!