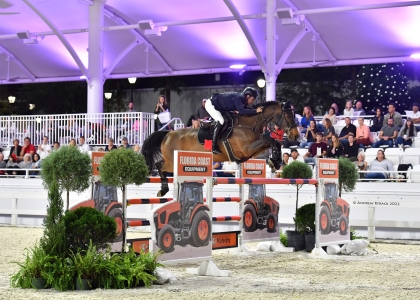 Santiago Lambre held two of the spots in the jump-off, returning first aboard his own Comtess 202 (Comme II Faut 5 x Parodie).

Lambre and the 11-year-old Westphalian mare navigated an extremely fast jump-off, opting to leave out a stride from fence two to three. The pair rolled around the remainder of the track, not hitting the brakes once to stop the clock at 35.684 seconds.

However, victory was yet sealed. Lauren Balcomb (AUS) and her own 11-year-old Zangersheide gelding Verdini D’Houtveld Z (Verdi x Laska III) entered the WEC Grand Arena shortly thereafter. The pair started on a quick gallop at the sound of the tone, taking a very tight turn from one to two, to fly down the line in five strides. They soared over the large vertical to streamline to the double combination. Balcomb and Verdini D’Houtveld flew to the Florida Coast Equipment oxer and galloped to the final fence in 35.181 seconds.

Lambre and Centano Van Aspergem Z were the final pair down the ramp to attempt Soberon’s short track. “[Verdini D’Houtveld] is one of the fastest horses in the United States. Lauren and ‘Verdini’ have been winning everywhere. When she jumped clear, I knew I was going to have to take all of the risks.”

Lambre and the 13-year-old Zangershiede gelding galloped to fence one, “I did six strides from fence one to two. I don’t think anyone else attempted six there. I didn’t want to go too fast to the double combination, but I had to take the risk and not add a step. I didn’t have the best approach to the last fence, but I couldn’t hit the brakes or else I wouldn’t have been able to win. Sometimes you have to go with your eye and stray from your plan.”

Lambre and Cetano Van Aspergem Z flew through the timers stopping the clock at 34.340 seconds for the victory.

Lambre hopes to continue his success next week, “‘Cetano’ and ‘Comtess’ will have a break next week. I will probably show Casey and I just brought over a new horse that was doing the 1.50m in Mexico with my brother. So, hopefully next week can be as successful as this week,” laughed Lambre.

An additional $5,000 was awarded to the fastest four-faulter of the $100,000 Florida Coast Equipment National Grand Prix. Kyle Dewar and his own Kastar Hof Ten Zoetendaele secured the award with a very quick time of 75.967 seconds with one rail down.

Stefano Baruzzo received the ‘Luck of the Draw’ award.