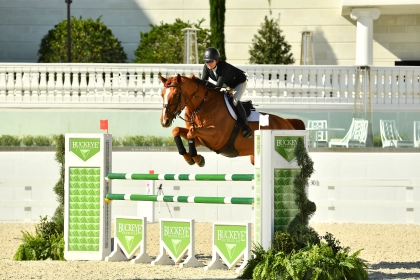 Thirty-one entries gathered at the WEC Grand Arena this morning to contest the $10,000 Buckeye Nutrition Futures Prix. Bobby Murphy designed the winding tracks that featured three double combinations that caught many horse-and-riders throughout the class. Eleven entries produced a clean first round and four jumped double clear, but it was Camille Maddrix and Caroline Michele Dugas’s Skyfall (Vigaro x Twi Light) that snagged the win.

Maddrix and the 13-year-old Dutch Warmblood gelding navigated a smooth and very fast first round, leaving all rails up to secure the class’s fastest first round time of 78.727 seconds, well under the time allowed of 89 seconds. Maddrix enjoyed the options that today’s course offered, “The first course was nicely built. There were places that asked about rideability and even though the time allowed increased, I think it was still a challenge for people. Normally, I don’t have to worry about time with [Skyfall], but I always make sure to pick spots during the walk where I can be more efficient.”

Maddrix and the springy Skyfall advanced straight to the jump-off, starting on a nice gallop to fence one to quickly roll to fence two. Maddrix opted to not take the inside turns, “There were some tricky inside turns available that some people did, but I thought that staying out would be just as competitive. Skyfall is naturally so quick; I knew that he would be just as fast going around.” Maddrix and Skyfall soared through the rest of the course, rolling around the turns not pumping the breaks once to stop the jump-off clock at 41.700 seconds, to guarantee first.

Christina Webb and Fox View Farm’s FVF Sailor Man (Popeye K x Baby Grande) placed second in this morning’s $10,000 Buckeye Nutrition Futures Prix. Webb and the 16-year-old Dutch Warmblood gelding delivered a slick first round, stopping the timers at 82.997 seconds. The pair jumped-off immediately, galloping from fence one to two to leave out a stride to the Golden Ocala Golf and Equestrian Club oxer. Webb and FVF Sailor Man rolled to the next vertical to bend to the Coca-Cola oxer where they landed right and jumped the pillar decoration to swiftly turn back to the red double combination. Webb and FVF Sailor Man flew through the timers stopping the clock at 43.299 seconds to earn second place.

Rounding out the top three in today’s $10,000 Buckeye Nutrition Futures Prix was Frank Owens and DS Holdings LLC’s Just Jeremy ES (Kannan x Titania). Owens and the eight-year-old KWPN gelding produced a lovely first round, stopping the clock at 85.316 seconds. The pair advanced to the jump-off, flying through the course, easily leaving out strides to stop the jump-off clock at 46.130 seconds.

Petersen and Zechariah 3:9 have had quite the successful streak at World Equestrian Center – Ocala, earning numerous wins and top three finishes during the 2021 Ocala Fall Show Series. Petersen and the now coming eight-year-old gelding continued their hot streak with another featured class win to start off the Winter Show Series.

Petersen and Zechariah 3:9 produced an effortless first round, jumping each fence with ease to stop the clock at 74.009 seconds. “I swear every time that horse steps in that ring, he gets even more competitive. The little green mistakes that we had during the Fall Series are gone. He knows when he steps in that ring, it’s game on.”

Kyle Dewar and his own Clever Van De Helle (Clearway x Mira VII) were just behind the winning pair. Dewar and 15-year-old Holsteiner gelding created a lovely first round, flowing seamlessly throughout the course to stop the clock at 72.735 seconds, well under the time allowed of 82 seconds. Dewar and the careful Clever Van De Helle jumped off immediately, rolling back from fence one to two in ten strides. The pair swiftly flew to the double combination to land right and roll to the next vertical. Dewar and Clever Van De Helle rolled through the rest of the course to stop the jump-off clock at 47.550 seconds, just three tenths of a second behind the leading pair.

Third place was taken by Luis Goncalves and Sigma Stables LLC’s Biloba Des Chaines. Goncalves and the 11-year-old Selle Francais gelding delivered a smooth first round leaving all rails up to stop the first-round clock at 76.998 seconds. The pair advanced right to the jump-off, taking a tidy inside turn from fence one to two, to walk down in eight strides to the double combination. Goncalves and the scopey gelding flew through the rest of the course taking multiple inside turns to stop the clock at 48.412 seconds to round out the top three.