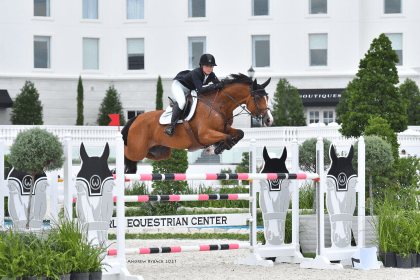 Early Sunday morning, 27 entries took to the WEC Grand Arena to compete for the top prize in the $15,000 WEC Ocala 1.40m Jumper Classic. The course for today’s class was very similar to the course from the $75,000 Stella Artois Grand Prix but backwards, starting at the Lungano Diamonds oxer. Catsy Cruz of Mexico designed the technical track with a tight time allowed of 76 seconds. Ten entries managed a clean first round and three jumped double clear, but it was Chloe Reid and Crossover 4 that took home the first place award.

Reid and the eight-year-old Hanoverian gelding entered the class toward the bottom of the order, delivering a clean and smooth first round in 70.072 seconds, well under the time allowed of 76 seconds. Reid was already familiar with this course, “The course was actually the backwards version of last night’s grand prix. The lines rode a bit differently. Last night I did six strides to the Tribute double combination but today I did five strides. It really depends on if you’re going away from the gate or coming to the gate.”

Sadler already knew Cezarro was ready to win, “After the first couple of jumps in the first round he felt like he was ready to go. Every once in a while, you get that feeling where everything comes up perfectly and you know you’re in it to win it.” Sadler and Cezarro soared through the entire course not pumping on the brakes once to stop the jump-off clock at 32.998 seconds.

“Cezarro knows how to win. He understands the game well and he wants to win with me. It is tough to find a horse with that mentality, who understands it enough to go fast but keep themselves in check and doesn’t rush it.”

Damian Guthrie and Gerry’s Jewels (Mersley Mon Capatain x Lily C) earned the third-place title in Week V’s $10,000 WEC Ocala Futures Prix. Guthrie and the 10-year-old Thoroughbred/Holsteiner mare delivered a fast and smooth first round stopping the clock at 68.319 seconds, well under the time allowed of 75 seconds. The pair advanced straight to the jump-off rolling through the course to stop the clock at 33.820 seconds to earn second place.

Rounding out the top three was Benjamin Meredith and North Peak Farms LLC’s Quinka. Meredith and Quinka (Quintero x Inken I) earned third place in last week’s $10,000 WEC Ocala Futures Prix. Meredith and the 12-year-old Holsteiner mare jumped a clean first round stopping the timers at 71.744 seconds. The duo advanced straight to the jump-off, galloping through to course to stop the clock at 34.434 seconds.