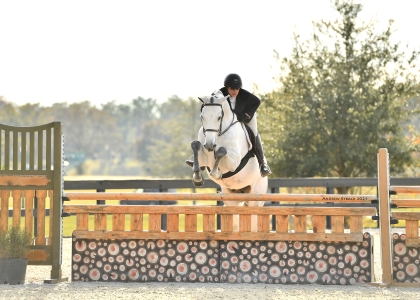 This afternoon’s $12,500 WEC Ocala 3’6”-3’9” Hunter Derby saw a driven field of eleven horse-and-rider combinations compete for the blue ribbon with scores soaring into the high 80s, but none could best Clair Kellner and Suzanne Cayatte’s Caligua (Casall x La Corofina).

Kellner is very familiar with Caligua, “We have had Caligua for a while. His mom does the amateurs and I competed him in the first year greens last year. His mom’s goal is to do the international derby on him, so I get to play.”

Kellner and Caligua returned for the handy, “My plan for the handy was to just give him a confidence building ride and do all the low options. I did end up going inside to the last in-and-out and he was perfect. He is super athletic and super capable, so if you tell him he can do it, he will give you his all.”

Kellner and Caligua produced a flawless handy course flowing seamlessly through the turns, to earn a handy score of 84, for a two-round total of 173 for the win.

Second place was captured by Jennifer Miller and Erica Prockow’s MTM Nabilli (Thunder Van De Zuuthoeve x Weurika Van’t Voorhof). Miller and the eight-year-old Belgian Warmblood gelding provided a lovely first round, jumping two high options to earn a score of 82. The pair returned for the handy taking multiple inside turns, easily clearing each fence to earn a score of 84, for an overall score of 166.

Douglas and MTM Kentucky Reign produced a smooth first round taking all four high options to capture a score of 74. Douglas and the seven-year-old Zangersheide gelding returned for the handy taking every single inside turn available to earn the class’s highest handy score of 89, for a two-round total of 163.

Twenty-six horse-and-rider combinations gathered at Hunter 1 this morning to vie for the win in the $10,000 WEC Ocala 3’ Hunter Derby, but it was Megan Young and Lee. D Cesery’s Comanche that finished on top.

Young and Comanche were the first entry to enter the ring, producing a foot-by-foot perfect first round to earn the class’s highest first round score of 90. “Comanche, makes my job easy. He is such an amazing horse that loves his job. We have had a pretty long partnership. We have had him since he was six years old, and he is now 13. He has been there and done that,” said Young.

Young and Comanche were the last pair to return for the handy, easy taking every inside turn available. “Comanche is used to doing the big derbies, so he knows how to turn. Rodney, that helps me on the ground always encourages me to be as handy as possible, so being handy is our second nature. Comanche loves to turn and knows exactly where we are going. He is very in tune and makes it super easy.”

Young and the 13-year-old warmblood gelding navigated a perfect handy round, while jumping all four high options to earn a high score of 93, for an overall score of 183 for the win.

Second place was taken by Tracy Fenney, another name that was seen in the headlines during the Ocala Summer Series. Fenney and MTM Farm’s MTM Raisin (Uriko x Adria) delivered a superb first round, taking all four high options with ease to earn a high score of 89. Fenney and the six-year-old Holsteiner gelding returned for the handy, completing each inside turn flawlessly while jumping all four high options to earn a second-round score of 92 for a two-round total of 181.

Erin McCabe Clayton and Front Row Sport Horses, LLC’s Cosworth (El Primero x Zaranka) rounded out the top three. Clayton has also taken home multiple hunter derby wins during the Ocala Summer Series aboard different mounts. Clayton and the scopey seven-year-old Dutch Warmblood gelding delivered to impeccable rounds, jumping all four high options during each, to earn a first round score of 86 and a handy score of 90, for an overall score of 176.

Join us tomorrow night at 7pm for the $75,000 Coca-Cola Beverages Florida Grand Prix!