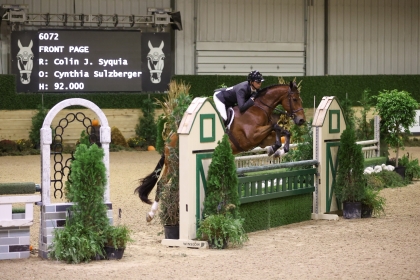 The $20,000 WEC 3’6”-3’9” Hunter Derby made its return to the R + L Arena for the final Derby Friday of the series. Fourteen top-notch competitors vied for the lion’s share of the prize money, but ultimately it was Colin Syquia who piloted Cynthia Sulzberger’s Front Page (Vigo D’Arsouilles x Cartagena Indias Ecaussinnes) to victory.

Syquia and the eight-year-old Belgian Warmblood gelding navigated a brilliant first round to earn a high score of 93.

Syquia has watched Front Page grow throughout the years, “We purchased him as a two-year-old and brought him over from Europe as a three-year-old. I started him once he came over, and he’s been on the rise ever since. Just this year he won the tier-two section at Derby Finals. He also won an International Hunter Derby at Tryon and placed third at Devon.”

The pair returned for the handy, “Front Page is a very handy horse, so we were able to navigate all of the inside turns smoothly.” Syquia and Front Page opted for a forward pace, negotiating the winding handy track beautifully to earn a score of 90 for a two-round total of 183.

Syquia spoke about the talented young gelding, “He has always been a laid back horse, but with an electric jump. He has the knack and wants to win. The bigger the stage, the better. He always rises to the occasion and never shrinks under pressure.”

Schatt and the 10-year-old Holsteiner gelding yielded an effortless first round to receive a score of 90. “We purchased Concent last year for a client of mine. She has been riding him at home and I’ve been campaigning him. Currently, we have been showing in the derbies and in the 3’6″ Greens.”

The pair came back to the R + L Arena to try their hand at the handy course, “I wanted to put a nice solid round on Concent. I had a small mistake earlier on my other horse, so I wanted to redeem myself.”

Schatt and Concent glided around the handy track finding each fence out of stride to secure a score of 89 from the judges for a two-round total of 179.

“We always have such a great time here. We have been coming to compete since the first year it opened. The jumps and footing are perfect. They are always improving and expanding.”

The $10,000 USHJA National 3’ Non Pro Hunter Derby saw a field of beautiful hunter pairings compete for the top prize during the final hunter derby Friday of the 2022 Fall Classic Show Series. Elyse Jeschelnig and her own Leonti emerged victorious after securing an overall score of 160 from the judges.

Jeschelnig and the 15-year-old Warmblood gelding delivered a smooth first round to capture a score of 81.  “I have been riding ‘Leo’ for three years now. He used to be my older sister’s horse, but when she stopped riding him, I took over.”

Jeschelnig spoke about today’s first round track, “I really enjoyed the course today. I was able to ride a similar course earlier in the day, so I had an idea how the jumps rode out of the turns. During the first round of the handy, I wanted to keep a consistent pace and stay smooth.”

The pair later returned to attempt the handy track, “I had a medium pace going in, so I could prosecute the turns nicely without being discombobulated. I decided to go in between the five and two stride, to roll back to the high option vertical. I saw a few do the inside turn, but I didn’t want to risk the rail.”

Jeschelnig and Leonti floated around the track to earn a score of 79 for a two-round total of 160.