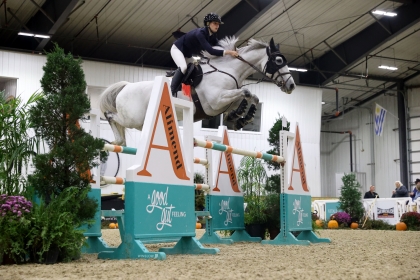 Wilmington, OH – The final week of the 2022 Fall Classic Show Series is underway with more national level competition. The $15,000 WEC Welcome Stake was the highlight event of the day that set the stage for 15 talented horse-and-rider combinations. Acclaimed FEI Level III course designer Anderson Lima (MEX) laid the tracks in the Sanctuary Arena, where Katherine Anne Brewer and her own Casido 2 (Cosido x Nele II) found a speedy route that was simply unbeatable.

Nine entries managed stay under the time allowed of 74 seconds and keep all the rails up to qualify for the jump-off. Of the nine, an even four jumped double clear.

Katherine Anne Brewer and Casido 2 were the second to last pair to attempt Lima’s first round track. The pair flowed around the course in an efficient 67.255 seconds.

Brewer has owned Casido 2 for several years, “I have had him for four years now. I purchased him as a project, and it took me a good amount of time to learn how to ride him. He’s pretty quirky and opinionated. He likes a certain way of going, so I had to step up to the plate and learn how I could help him,” Brewer said. “I finally started to figure him out this year and now I couldn’t imagine jumping big tracks without him.”

Brewer and the 13-year-old Holsteiner gelding went straight to the short course after the tone, “I knew he would take any turn that I asked him to take and there weren’t many fast rounds, so I aimed to be neat and efficient.”

Brewer and the speedy Casido 2 flew around the track to stop the clock at 37.251 seconds.

“Casido 2 gives me an unstoppable feeling. Just this year we won a $75,000 Grand Prix at HITS and jumped the $500,000 Great American Grand Prix which was our biggest track we’ve done,” shared Brewer. “I trust him with my world, and I am extremely lucky to have been able to learn from him.”

Sarah Meier and her own Nightshade SCF (Baldev x Olisina) found second place in today’s $15,000 WEC Welcome Stake. Meier and the nine-year-old Belgian Warmblood gelding delivered a clear first round under the time allowed of 74 seconds. The pair advanced straight to the jump-off, rolling around the course while producing tidy turns in 37.315 seconds, just behind Brewer and Casido 2.

Sam Pegg and Ten Sixity Stables’ Dolla 3 slid into third place. Pegg and the 11-year-old Holsteiner mare found a clean first round in 65.239 seconds to qualify for the jump-off. The pair swiftly navigated the short track in an efficient 40.027 seconds to round out the top three.