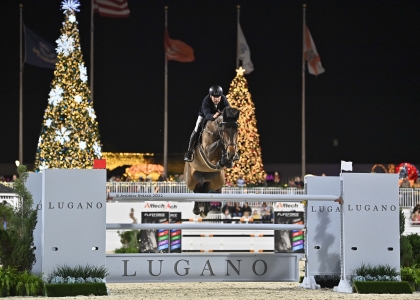 Of the starting 36 entries, 17 jumped a clear first round, but only four athletes from Brazil, Australia, Chile and the United States managed to keep all the rails up in the jump-off.

Pathfinders Rowan Willis and his own Wellington Grey Goose (Corlensky x Grandira) were the first pair to return to try their hand at Cabral’s jump-off track. Willis and the speedy 11-year-old Warmblood mare set off on a strong gallop to fence one to fly to the large blue vertical. The pair sliced the Lugano Diamonds oxer to soar to the double combination. The pair flew through the remainder of the course in 39.102 seconds to set the speed for the rest of the class.

The next double clear ride was accomplished by Samuel Parot (CHI) aboard his own Chrystal Blue (Chacco-blue x Cherly Z). Parot and the 11-year-old Oldenburg gelding returned to the jump-off with determination, flying from fence one to two. The pair soared over the Lugano Diamonds oxer in superb form, to roll to the one-stride. Parot and Chrystal Blue galloped around the rest of the track stopping the clock at 39.520 seconds to ultimately secure the third-place finish.

Richard Spooner and his own Quirado RC (Quinar x Ursula) were the third pair to yield a double-clean effort. Spooner and the 13-year-old Holsteiner gelding navigated an efficient jump-off leaving all rails up to stop the timers at 43.500 seconds which was good for fourth place.

Santiago Lambre and The Diamant Rose Z were the final pair to jump clean in the jump-off. Lambre was surprised by the number of riders that qualified for the short course, “It was a big challenging track. When I walked the course, I thought there weren’t going to be many clears, but the horses ended up jumping almost too well here. The footing is incredible, the atmosphere is amazing, and the jumps are impressive. I hope that World Equestrian Center will host some five-star events soon, because maybe at a 1.60m we will have a few less in the jump-off,” laughed Lambre.

Lambre had a plan for the talented 11-year-old Zangersheide mare in the jump-off, “I knew Rowan was the first one in, and he went quick, but there were a few places where he left it open to be quicker. My mare is very quick off the ground and turns on a dime, so I knew if I could make a few tidy turns and use her speed off the ground to my advantage then I might be able to win it. Then, I just tried to be as quick as possible to the final fence.”

The pair landed after the final oxer to soar through the timers in 37.690 seconds to seal the victory.

“I love World Equestrian Center. I think I have jumped in almost every grand prix since this facility has opened. It’s the best competition venue in the world and I hope that they have World Cups™ here soon. The atmosphere is unique and the competition is always fierce. I am looking forward to the Winter Spectacular next month,” expressed Lambre.

An additional $5,000 was awarded to the fastest four-faulter in the $100,000 Lugano Diamonds Grand Prix. Sharn Wordley (NZL) and his own Gatsby snagged the award after producing a quick first round in 70.654 seconds with one rail down.

Megan Wexler received the ‘Luck of the Draw’ award.