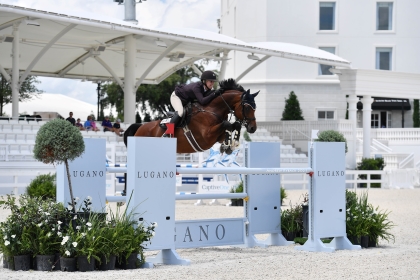 A new featured class started this afternoon in the WEC Grand Arena with a competitive field of 18 entries contesting a course designed by Joey Rycroft of Canada. The track featured several bending lines as well as multiple combinations. Six competitors produced a clear first round to advance to the jump-off but only three pairs were able to complete the short course without any faults. Dorothy Douglas captured two double-clear slots, earning her first and third place in the $15,000 WEC 1.40m Jumper Classic.

Dorothy Douglas and MTM Pablo were the first pair on course in the $15,000 WEC 1.40m Jumper Classic. Douglas and the eight-year-old Warmblood gelding owned by MTM Farm delivered a remarkable first round course, stopping the clock at 81.430 seconds. “This week we have been stepping him up. First, we did a 1.20m, 1.30m, yesterday we did a 1.35m, and today we did the 1.40m. He’s very green but a super ultra-talented up-and-coming horse. Today, the feel he gave me, made me so excited for the future,” said Douglas.

Douglas changed her track for the jump-off, “I originally walked ten [strides] from the first two jumps of the jump-off but on both horses, I ended up doing nine strides. MTM Pablo is naturally a little bit of a quicker horse across the jumps, so I would say my track on both horses was the same, but I think because of the way that Pablo goes, I had a little bit of an advantage over [third place horse] Cedrik.”

Douglas and MTM Pablo (Perigueux x Celina) advanced straight the jump-off leaving out a stride from fence one to fence two and produced a tight roll back to fence three setting the rest of the course to flow beautifully. Douglas and MTM Pablo soared through the timers stopping the clock at 33.265 seconds, creating a time that 17 other competitors could not catch.

Jamie Taylor of Temecula, California, who secured second place in the $15,000 WEC Welcome Prix earlier this week on Cocoliche of Greenhill Z, captured the second place finish this afternoon on I’m Special, the eight-year-old Dutch Warmblood stallion owned by Cheryl Mitts. Taylor and I’m Special produced a fast, clean first round, stopping the clock at 78.021 seconds, well under the time allowed of 84 seconds. Taylor and I’m Special stayed in the Grand Arena to jump-off immediately, delivering a fast clean round, slicing fence two, earning the pair a time of 33.547 seconds, just three-hundredths of a second away from Douglas and MTM Pablo.

Douglas returned to the Grand Arena on MTM Cedrik (Colman x Vicky VI) to capture another top placing. Douglas and MTM Cedrik floated through the first-round course in 79.703 seconds. “MTM Cedrik has competed in some national grands prix. Same as MTM Pablo, we have been stepping Cedrik up all week. He is owned by Nina Moore and to me he is the ultimate 1.60m horse. I can picture him doing the night classes here in the next couple of years.”

Douglas and MTM Cedrik the eight-year-old Holsteiner gelding jumped off immediately, also leaving a stride out from fence one to fence two. “Cedrik’s really strong points are that he is super scopey and has a huge stride, so I felt like I turned back a little bit tighter and left out a few strides around the corner but just because he is a bigger, rangier horse, he is a little bit slower.”  Douglas and MTM Cedrik galloped through the finish, stopping the clock at 34.412 seconds to round out the top three.