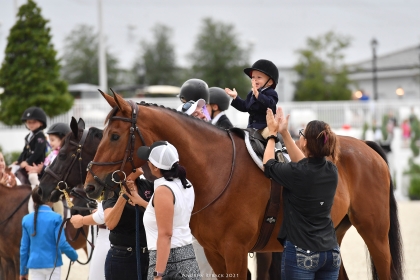 Week III of the World Equestrian Center – Ocala Summer Series brought another exhilarating week of equestrian sport with some new faces taking home wins in feature classes. The highlight of the week was Saturday’s $75,000 Stirrups Restaurant Grand Prix.  The top three entries were racing head-to-head in the jump-off with placings ultimately separated by just one second.

A new featured class started Sunday afternoon in the WEC Grand Arena with a competitive field of 18 entries contesting a course designed by Joey Rycroft of Canada. The track featured several bending lines as well as multiple combinations. Six competitors produced a clear first round to advance to the jump-off but only three pairs were able to complete the short course without any faults. Dorothy Douglas captured two double-clear slots, earning her first and third place in the $15,000 WEC 1.40m Jumper Classic.

Dorothy Douglas and MTM Pablo were the first pair on course in the $15,000 WEC 1.40m Jumper Classic. Douglas and the eight-year-old Warmblood gelding owned by MTM Farm delivered a remarkable first round course, stopping the clock at 81.430 seconds. Douglas and MTM Pablo (Perigueux x Celina) advanced straight to the jump-off leaving out a stride from fence one to fence two and produced a tight roll back to fence three setting the rest of the course to flow beautifully. The pair soared through the timers stopping the clock at 33.265 seconds, creating a time that 17 other competitors could not catch.

Saturday evening’s $75,000 Stirrups Restaurant Grand Prix hosted 53 entries under the lights in the WEC Grand Arena. Rycroft’s course included a triple combination, a double combination, and a triple bar. Twelve entries advanced to the jump-off, but it was Erynn Ballard (CAN) and Ilan Ferder’s Ceitasi (Caretello B x Ceitas) that captured the win.

Ballard and Ceitasi yielded a flawless first round, soaring to the top of the standards over each fence, stopping the first-round clock at 82.750 seconds. Ballard and Ceitasi the 11-year-old Westphalian mare, started the jump-off strong and fast, “I had nothing to lose,” confirmed Ballard. “I had two very fast riders behind me and in my own riding, my next step is to try and win more classes. In a class like today, being a fast four-faulter wasn’t going to get you a nice ribbon. It wasn’t worth the risk of being a slow clear.”

Ballard and Ceitasi left out a stride from fence one to fence two. “Ilan said to ride it off my eye,” said Ballard. “Once I got the nine [strides] from one to two, I was on a roll.” Ballard and the careful mare rocked through the rest of the jump-off, stopping the clock at a very fast time of 38.937 seconds for the win.

Forty-three entries challenged a winding track in Saturday afternoon’s $10,000 Futures Prix 1.30m-1.35m. Thirteen entries managed to jump double clear, but it was two-time Olympian Pablo Barrios (VEN) and Clotilde Lewis’s Ever Star Du Cadran that took home the blue ribbon. Barrios and the recently imported seven-year-old Selle Francais gelding by Quickstar x Prestige Du Hille delivered a clear first round in 80.557 seconds, well within the time allowed of 84 seconds. The pair advanced straight to the jump-off galloping through the course to stop the clock at 30.547 seconds for the win.

Derby Friday took over the CaptiveOne Indoor Arena as more than 50 entries contested the $12,500 WEC Ocala 3’6” – 3’9” Hunter Derby and the $10,000 WEC Ocala 3’ Hunter Derby. Courses for Friday’s classes were designed by Tucker Williams of Ocala, Florida and featured a track of inviting natural obstacles. The handy round of each class offered serval options for inside turns, allowing entries to show off their horse’s brilliance and adjustability.

The $12,500 WEC Ocala 3’6”-3’9” Hunter Derby saw 13 competitive horse-and-rider combinations ready to take on the win. Brady Mitchell rode two horses in the class and took home not only first place, but second place as well. Both horses that Michell competed with are owned by Float On Equestrian LLC. Michell of Wellington, Florida, and Castle Black a nine-year-old Mecklenburg gelding, were on fire, producing a first-round score of 88, and a handy score of 90, with a two round total of 178 for the win.

Mitchell and his second place mount, Casting Call (Cornet Obolensky x Laila) delivered a polished first round taking zero high options and still earning a high score of 87. Mitchell and Casting Call returned for the handy and performed an effortless course, receiving a score of 88, for a two-round score of 175.

Forty entries filled the CaptiveOne Indoor Arena for the $10,000 WEC Ocala 3’ Hunter Derby but it was Brady Mitchell who captured four top 10 placings in the class, once again filling the first-and-second place spots.

Mitchell and his own Pompidou (Pilothago x Haya Z) captured the blue ribbon on the recently imported seven-year-old Westphalian gelding. The pair took the class by storm, jumping all three high options in the first round which led to a high score of 87. They returned for the handy round, flowing smoothly through the inside turns while taking all three high options to earn the class’s highest score of 91, for a two-round total of 178. Mitchell was right behind himself on Georgic, owned by Further Lane Farm. Mitchell and the eight-year-old Holsteiner mare produced two beautiful courses for a two-round total of 175, to earn second place.

Feature classes for Week III of the World Equestrian Center – Ocala Summer Series kicked off early Thursday morning with 41 entries vying for the win in the $15,000 WEC Welcome Prix. The course for the class was designed by FEI Level III course designer Joey Rycroft of Canada. Twelve entries produced a clear round to advance to the jump off but only six entries went clear with Tracey Fenney and the nine-year-old Holsteiner mare, MTM Dolce Vita taking the win, stopping the clock at 37.679 seconds.

Sophia Arnoldi and Stacy Sanderson’s Bazzi took home the blue ribbon in the $7,500 Non Pro 2’6” Hunter Derby. Earning a first-round score of 81 and a handy score of 82, for a two-round total of 165, sixteen points ahead of second place.

Congratulations to all entries on another fantastic week at World Equestrian Center – Ocala!

World Equestrian Center – Ocala is extending the additional prize money that was originally placed thru Week IV, to go thru Week VII, with even more additional prizes. For prize list information, class schedule, and information about ShowManagementSystem, please click here. To watch the equestrian sport action in the WEC Grand Arena and in the CaptiveOne Indoor Arena on live stream, go to ClipMyHorseTV.