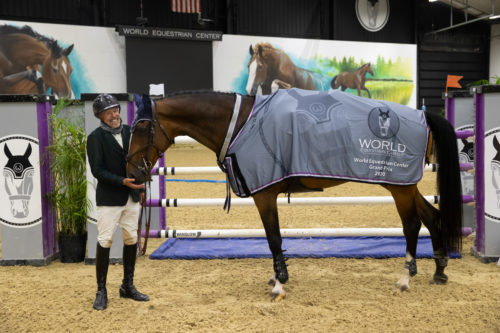 Nearly 50 entries filled the Sanctuary Arena this afternoon for the $25,000 WEC Grand Prix and the $7,500 Futures Prix 1.30m sponsored by Voltaire Design. Competition was fierce with nearly one-third of the entries advancing to the jump-off in both classes, and top finishers separated by just fractions of a second.

Boyd and Berkley III were one of the first entries to navigate a clear first round. The pair have been on a hot streak, winning the $5,000 Welcome Stake 1.35m during the WEC Summer II show just three weeks ago. This afternoon, Boyd and the 14-year-old Dutch Warmblood gelding were on form, leaving all rails up in the first round in 82.742 seconds, just within the time allowed of 83 seconds, conserving plenty of energy for the short course.

Also securing a spot in the jump-off were WEC Summer II’s $25,000 WEC Grand Prix winners Kady Abrahamson of Abrahamson Equestrian, LLC of Georgetown, Kentucky, and Ocala, Florida, and her Maraca LS La Silla (Quintero La Silla x Marimba La Silla). Abrahamson and the 13-year-old Belgian Warmblood mare cleared each fence in the first round with room to spare in 81.972 seconds.

The final entry to claim a spot in the jump-off was Michael Murphy of Ashland Farms of Lexington, Kentucky, and Wellington, Florida, and Ashland Farms’ Chaccofina (Chacco-Blue x Hauptstutbuch Anchorwoman). The duo topped the $5,000 Welcome Stake 1.35m at World Equestrian Center on Thursday and returned to the Sanctuary Arena this afternoon ready to compete. Murphy piloted the 12-year-old Hanoverian mare through a clear first round in 81.010 seconds, signaling that they would be strong competitors on the short course.

Boyd and Berkley III were second in the order for the jump-off. The pair gave the track their all, leaving out strides and taking impressive inside turns, stopping the clock with all rails up at 39.196 seconds, which would prove unbeatable for the remainder of the class.

Abrahamson and Maraca LS La Silla took to the course shortly after, keeping a forward pace and taking inside turns where possible. They were quick and clear in a time of 40.056 seconds, sliding into the second-place spot just six-tenths of a second behind Boyd and Berkley III.

Last to return for the jump-off were Murphy and Chaccofina. The pair flew through the course, utilizing inside turns and jumping clear in a time of 41.317 seconds, moving into third place.

Boyd took a moment to chat with us ringside after the class, “I liked the course. We got in a couple of trouble spots in the first round, but Berkley III jumped amazing out of them. He was looking for the jumps in the jump-off and everything came up right out of rhythm. I never had to adjust, which was great. When he’s focused like that it’s awesome. I was really pleased with him. I left out a stride from 5 to 6, then I left out a stride from 9 to 10. Then, he turned really well inside to the combination. We’re really pleased with him, he’s an awesome horse. He’s really come around nicely.”

The $7,500 Futures Prix 1.30m sponsored by Voltaire Design saw a similar track to that of the Grand Prix, but with a one-stride combination replacing the triple combination, and oxers replacing the liverpool and triple bar. The Futures Prix also saw four double clear entries with less than one second separating top placings, but it was junior Alexander Alston of New Albany, Ohio, and River Mountain Farm’s Christiaan (Verdi x Summerdive) that earned the blue ribbon.

The pace in the class was set by the first in the order, Kady Abrahamson and Abrahamson Equestrian, LLC’s Mega Jackpot (HH Orlando x Follow Me). The duo have been collecting top placings in 1.20m and 1.30m classes throughout the year, and showed off their skills in afternoon’s class. Abrahamson and the 8-year-old Belgian Warmblood gelding were quick and clear in the first round in a time of 69.616, well under the time allowed of 79, which was adjusted down to 74 after the first three entries. They continued straight to the jump-off of the Table II 2b event, blazing through the course and stopping the clock with a clear round at 35.221 seconds.

Abrahamson and Mega Jackpot held the top spot throughout most of the class until Alexander Alston and River Mountain Farm’s Christiaan (Verdi x Summerdive) took to the course. The pair recently moved up to the Medium Junior Jumpers, preparing them well for the Futures Prix. Alston and the 13-year-old Dutch Warmblood gelding flew through the first round in 68.766 seconds, then advanced straight to the jump-off to navigate a second foot-perfect round in 35.055 seconds, claiming first place.

Alliy Moyer also had noteworthy rounds in the Futures Prix aboard Moyer Farm, LLC’s Galway Bay Pandora (Askoll Peter Pan x Neptune D’07). The pair often take top placings in the Medium Amateur Owner Jumpers and brought their A-game to this afternoon’s class. Moyer and the 9-year-old Irish Sport Horse mare managed a clear first round in 69.185 seconds, then continued straight to the jump-off to jump clear in 35.055 seconds for a third-place finish.