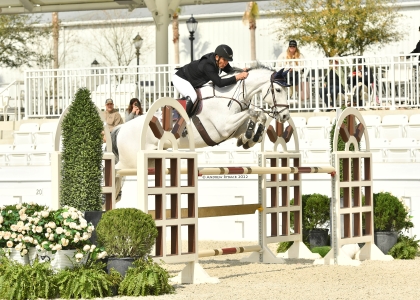 Saturday’s feature class action began with 43 competitive entries taking to the WEC Grand Arena to vie for the win in the $10,000 Buckeye Nutrition Futures Prix. Peter Grant (CAN), an FEI Level III course designer created the intricate tracks where only three entries managed double clear rounds, but it was Manuel Torres (COL) and Lara Gabrie’s Enrico Blue (Zirocco Blue VDL x Pamela) that flew to the win with three seconds to spare.

Torres and the careful Enrico Blue went about half way through the order, with the goal of producing the first double clear round. The pair navigated the first round track in 81.565 seconds.

“The course was very challenging, not many people went clear with really nice horses. But, Enrico Blue has been winning a bunch of classes in the last three weeks, so I was very pleased with him today. This is probably the biggest course that he has jumped so far, and he was super.”

Torres and the 13-year-old KWPN gelding advanced to the jump-off, attempting to be the first clear round, “I had to give it a good shot even though I knew that no one had made it clear because I knew who was coming behind me, so I just gave it all I could.”

Torres and Enrico Blue were able to create the first clear jump-off round in an impressive time of 37.035 seconds, setting the pace for the remainder of the class.

Sean Jobin (CAN) and Foxridge Farm’s Cuba Libre V (Cornet Obolensky x Grace) were the next entry to deliver a double clear round. Jobin and the scopey 10-year-old Westphalian mare delivered an effortless first round in 85.183 seconds, just within the time allowed of 86 seconds. The pair went straight to the jump-off, rolling through the course, jumping to the top of the standards to stop the clock at 40.967 seconds.

The final pair to navigate two clean rounds was Sam Pegg (CAN), and Caroline Eracles’s Gluckskeks. Pegg and Gluckskeks produced a clear first round in 84.255 seconds. The pair advanced to the jump-off with a more conservative approach to stop the clock at 41.166 seconds with all rails up.

Ruyle and Cyramo Z advanced straight to the jump-off, starting on a strong gallop to fence one to take the inside turn to fence two. The pair streamlined to the large white oxer in ten strides to then swiftly roll through the rest of the course not slowing down once, to stop the jump-off clock at 38.470 seconds.

Derek Petersen & Zechariah 3:9 (Zirocco Blue x Katrina)  secured the second fastest first round time in the $12,500 WEC Ocala 1.40m Jumper Classic. Petersen and the eight-year-old Dutch Warmblood gelding tackled the track, stopping the timers in 76.089 seconds, well under the time allowed of 82 seconds. The pair advanced to the jump-off, taking tidy turns while soaring high over the standards in 39.742 seconds to earn second place.

Rounding out the top three in the $12,500 WEC Ocala 1.40m Jumper Classic was Kristen Vanderveen and All In Horses & Jan L. De Waard’s All In Horses Cava. Vanderveen delivered a seamless first round in 78.283 seconds and went straight to the jump-off, galloping through the course not pumping the brakes once for a time of 40.030 seconds to capture third place.