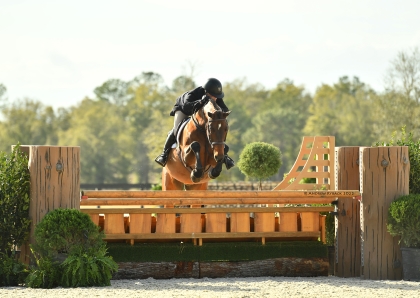 Ocala, FL – Over 100 horse-and-rider combinations gathered at Hunter 1 for Week V’s Hunter Derby Friday. Pat Muskus designed the rolling tracks that offered three high options and allowed entries to showcase their horses brilliance. Competition was fierce in all three derbies with scores soaring into the 90s.

Morgan Ward of Milford, New Jersey and her own Comissario (Calido x Amabilita) earned top honors in today’s $20,000 WEC Ocala 3’6”-3’9” Hunter Derby. Ward and Comissario navigated an effortless first round, opting to take all three high options for a score of 91 from the judges.

Ward and Comissario have been a partnership for many years, “I owned Comissario when I was sixteen. After we won derby finals, we sold him and then bought him back when I was 21. We will never sell him again. He doesn’t owe me anything. He is the best little horse that will jump his heart out for me every time. This is the only class he does all week. He goes on trail rides and gets cookies then comes to the derby.”

Ward and Comissario were the second to last pair to return for the handy round, “Comissario is very handy. I just look and he does the inside turns,” said Ward. “I would usually have went around the WEC letters, but I went inside because it set me up for the inside turn to the high option vertical. He did it perfectly and it was so easy for him.”

Ward and the 15-year-old Warmblood gelding delivered a foot-by-foot perfect round to earn a score of 93 in the handy, for an overall score of 184 for the win.

Just behind Maddrix and Shutterbug, was David Jennings and Allison Ventura’s Jordantinus (Air Jordan x O.B.O.S. Flower) with an overall score of 181.

The $15,000 WEC Ocala 3’ Open Hunter Derby saw an impressive field of 48 stunning hunters compete for the blue ribbon over Pat Muskus’s winding track. Amanda Steege and Ashley Wallace’s Best of Me (Carambole x Jody Can ZAS) were the pair that captured the top prize, earning scores in the 90s on both tracks.

Steege and the flashy 12-year-old Dutch Warmblood mare produced an effortless first round, jumping the three high options stylishly for the class’s highest first-round score of 92.

“I just met Best Of Me a couple weeks ago because an Amateur client of mine Jackie Maggiore, was looking for a horse to lease for circuit. A good friend of mine introduced us to Ashley and Best of Me and it was a great fit. I’ve only shown Best of Me once in the 2’9″ NSBA hunters where she ended Champion, so I had no clue how today was going to go,” said Steege

Steege and Best Of Me were the last pair to return for the handy, navigating a lovely round, taking each inside turn to secure a score of 94 for an overall score of 182.5.

“I am a professional and I’m supposed to know what I am doing, but as I am sitting here at the gate, I’m thinking, huh, I’ve only ever jumped this mare once before and here we go, bending nine away from the gate to the high option, I think we will be fine. In the end, she was amazing and super fun. We feel so lucky to have met Ashley Wallace and Best Of Me, and to have made this connection,” stated Steege.

Thirty-six entries contested the $15,000 WEC Ocala 3’ Jr/Am Hunter Derby this afternoon but, it was Isabel Harbour and IMH Equine, LLC’s Fitz (Numero Uno x Kootje) that earned the highest overall score from the judges to secure the blue ribbon.

Harbour and the 14-year-old Dutch Warmblood gelding delivered a graceful first round, jumping the three high options for a score of 89. Harbour had a very successful day, also earning The Style of Riding Award presented by Bill Rube.

“Fitz is the best. He has no prep. He goes out in the pasture at night, and I ride him for 20 minutes the day before, then he’s ready to go.”

Harbour and Fitz returned for the handy, delivering a very tricky inside turn, “The turn rode great. If I turn my head, Fitz knows exactly where we are going. He is wonderful at turns, and I love doing all the crazy, challenging turns in the handy rounds.”

The pair rolled through the rest of the course, securing the class’s highest handy score of 91, for a total of 180 for the win.

Molly Braswell captured second and third place honors in today’s $15,000 WEC Ocala Jr/Am Hunter Derby on both of her own mounts, Balou Label and Jalisco.

Braswell’s second place mount, Balou Label by Balou delivered two stunning rounds, for a first-round score of 90 and a handy score of 86, for a two-round total of 177.

Jalisco by El Savador was Braswell’s third place mount, earning an overall score of 175 from the judges to round out the top three.

Before the start of the handy round in the $15,000 WEC Ocala 3’ Jr/Am Derby, Bill Rube presented the prestigious Style of Riding Award to Isabel Harbour for her classic style and her sportsmanship. The recipient serves as a role model for preserving the integrity and tradition of equestrian sport. “This award is very special to me because the recipient of this award pays it forward both in and out of the show ring,” says Rube. Harbour received an elegant duffel bag and wore a pink rose corsage on her lapel throughout the handy round to signify her achievement.