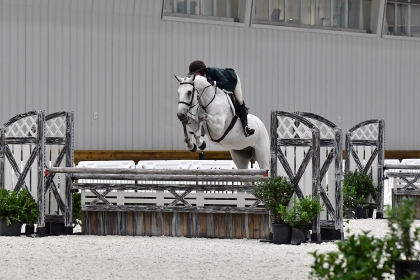 Clayton and Champs Élysées, a recently imported nine-year-old Selle Francais gelding owned by Bays and Greys, LLC, delivered a beautiful first round taking four high options to secure the highest first round score of 89. “He gets better and better with each class. About three months ago he was jumping the two-star Grand Prix, so he has more than plenty of scope. I think he is going to be a legitimate Derby Finals horse,” said Clayton.

Clayton and Champs Élysées were the final pair to return for the handy round and stylishly addressed the course which featured a difficult inside turn to a lofty two-stride, along with a sliced trot fence with a tight roll back to a high option oxer, to earn a score of 92.  “I really enjoyed how this course rode. Especially the handy. The course had a couple of places where I felt like you could show off a different turn.”

Second place finishers Hanna Toering and Wyette Felton’s Condor, a nine-year-old Warmblood gelding, earned the third highest score in the first round taking four high options, producing a score of 86. Toering and the adorable Condor, who likes to be goofy and playfully stick out his tongue, came back for the handy where their presentation reaped a high score of 88, for a two-round total of 174.

Timothy Maddrix and Missy Nolen’s Play Maker (Thagoras x Hauptstutbuch) produced a delightful first round taking two high options to achieve the second highest first round score of 88. Maddrix and Play Maker the seven-year-old Oldenburg gelding returned for a lovely second round taking all four high options to secure a score of 85.5, for a total score of 173.5. Maddrix also received the first, third, and eighth place earnings in this morning $10,000 WEC Ocala 3’ Hunter Derby.

This morning’s $10,000 WEC Ocala 3’ Hunter Derby saw a highly competitive field of 38 entries with scores soaring high in the 80s throughout the class. Timothy Maddrix and Missy Nolen’s Cypress earned top honors laying down two perfect rounds. Maddrix and Cypress earned the fifth place finish in last week’s $10,000 WEC 3’ Hunter Derby and returned this morning to sweep the class. The pair started off strong taking all four high options, and were granted the highest first round score of 87.5 for their efforts.

Maddrix really enjoyed the design of the handy course, “You got to gallop to one turn to two, then once you got around the trot jump you got to gallop again. Everything was forward and flowing which I really like.” Maddrix and Cypress the 10-year-old Warmblood gelding returned for the handy round, taking two inside turns that no other competitor attempted, earning a score of 90, with a two-round total score of 177.5. “The horse is really handy. He does the adult amateurs [with his owner Missy Nolen] and the derbies with me. He is her horse but when she cannot come, I get to do him in the derbies.”

Maddrix’s also received the third place honor this afternoon on Lynne Skaryak’s Jolly Mon (Arko III x Pretty Woman). Maddrix and Jolly Mon the nine-year-old Belgian Warmblood delivered two impeccable rounds taking all four high options in both courses, which earned a score of 87 in each round, for a total two-round score of 174.