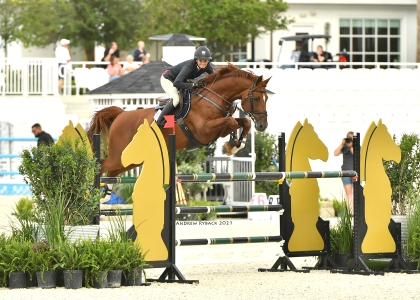 Fifty-one competitive horse and rider combinations took to the WEC Grand Arena this evening to contest the $15,000 WEC Welcome Prix, and ultimately it was Jordan Petersen and Derek Petersen’s, Diamant’s Legacy who jumped to the win.

Petersen and Diamant’s Legacy the 12-year-old Oldenburg stallion started strong with a first round time of 76.388 seconds, well under the time allowed of 81 seconds. Petersen from High Springs, Florida and Diamant’s Legacy have been a dynamic and nearly unstoppable pair for well over two years. Petersen’s Father-in-Law Derick Petersen says the horse loves the WEC Grand Arena. “He really likes that ring. He won two Grands Prix during the winter circuit then a second place, third, and fourth. He loves it and I am glad that is where he will be spending most of his time because it is right down the street.

Petersen was ready to go fast. “The only real number that we planned on because we had to stick with the four down the first line, was to do seven to the last jump and keep the roll backs tidy. The biggest one for him was to keep up that vertical on the slice. So, I knew once we left that up, we were in pretty good shape.”

Petersen and Diamant’s Legacy flew through the jump-off with forward distances and neat turns to record a time of 33.721 seconds for the win.

The second week of the Ocala Summer Series continues through June 20 at World Equestrian Center – Ocala with competition in six rings, and feature jumper action including the $75,000 Calluna Spa Grand Prix on Saturday night. View the free live stream at ClipMyHorseTV.com.