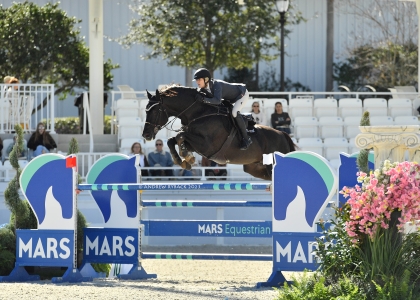 Brennan and the 14-year-old Westphalian stallion entered the arena toward the beginning of the order. The pair found a strong rhythm to deliver a faultless first round in 79.476 seconds, well under the time allowed of 87 seconds.

Brennan spoke about today’s opening track, “It was a beautiful course. I have a horse with a tremendous step, and he played with it. He had a blast out there and I saw the top of the standards while I was in the air. It rode perfectly for him.”

The pair went straight to the jump-off, “Over the first jump, part of my bridle broke, so for [Vertigo Delorme] that was game on. He just took off and I wasn’t able to hold him back, so I tried to find the distances going forward and hope it was there, if it wasn’t, I knew he would put me there. He has always hunted the jumps. He wants to win every time he steps in the ring.”

Brennan and Vertigo Delorme flew around the jump-off track, stopping the clock at an unbeatable 37.438 seconds which held the lead for the remainder of the class.

Brennan spoke about the competitive stallion, “He has a heart bigger than Texas and more game than Michael Jackson. He is a grenade that goes out there to win each and every time. He’s the smartest horse I have ever met and looks through my soul. He’s fourteen now, but he’s by Chacco Blue, so he will be in his prime until he is 25,” laughed Brennan.

Brennan is looking forward to riding Vertigo Delorme under the lights on Saturday nights, “Next week I will plan to do the 1.40m, then hopefully by Week III we will do the grand prix and go for gold after that.”

Richard Spooner (USA) and Molly Ohrstrom’s Halcon secured the second-place finish in today’s class. Spooner and Halcon won the $15,000 Buckeye Nutrition Futures Prix twice during the 2022 Fall Show Series at World Equestrian Center – Ocala. Today, they continued their success after laying down a clean first round in 84.064 seconds. Spooner and the seven-year-old Argentinian Sport Horse stallion went straight to the jump-off, flying through the course and stopping the clock at 38.330 seconds to slide into second place.

Jumping clear proved to be quite possible in the first round, as 14 managed to keep all rails up to qualify jump-off. Of the 14, only five managed to produce a double clean effort.

Hammack’s time wasn’t caught until Santiago Lambre (BRA) and All In Horses Cava and Jan De Waard’s Nono VD Withoeve (Elvis Ter Putte x Chellana I Z) entered the arena. The pair produced a smooth effort in the first round in 80.653 seconds. At the sound of the tone, Lambre and the ten-year-old Belgian Warmblood stallion dashed around the jump-off track in 42.981 seconds, nearly four seconds faster than Hammack and Ghana FS Z.

Victory seemed set, but there was still one duo left, Dorothy Douglas and MTM Pablo. Douglas and the ten-year-old Warmblood gelding found a speedy first round in 76.181 second, well under the time allowed of 86 seconds.

“I think the sun became a bit of a factor today. It is always a bit tricky when the sun sets and creates shadows. I had a bit of an advantage because I was last in the order, and there weren’t many shadows left,” Douglas shared. “My goal was to be smooth, stay on rhythm and let Pablo do his job.”

When it came time of the jump-off Douglas had a plan, “Pablo is naturally fast across the ground, and he’s very careful. The one question was the striding in the last line and the vertical at the top of the arena. A lot of people had a rail at that vertical because they were shifting left, so I aimed to stay straight then look for my turn,” said Douglas. “I found the second-to-last oxer positive so I was able to walk down the last line in seven.”

Douglas and MTM Pablo flew through the finish stopping the clock at 41.284 seconds to steal the victory.

Douglas spoke about the stunning bay gelding, “Pablo is the best. He is the best competitor and gives you the best feeling in the ring. This was such a great way to kick-off the circuit and hopefully he will do some Saturday night grands prix soon.”