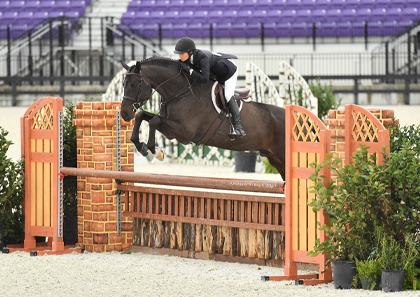 Derby Friday took over the Stadium at World Equestrian Center — Ocala again this week. A combined 90 entries contested the $20,000 WEC Hunter Derby 3’6″-3’9″, $15,000 WEC Derby 3′ Open and $15,000 WEC Derby 3′ Non Pro classes today. Keith J. Bollotte designed stunning courses for the derbies that featured elegant natural obstacles and plenty of opportunities for inside turns in the handy round. Though the day brought gray skies and heavy rain showers, the weather could not dampen the riders’ performances with countless scores soaring into the 90s.

Havens Schatt and Kelly Corrigan’s Diatendro (Diarado x Cobina) earned 1st place in Week 2’s $20,000 WEC Hunter Derby 3’6″-3’9″ and delivered a stunning performance again this afternoon. Schatt and the 9-year-old Hanoverian stallion brought their A-game to the first round, taking all four high options for a score of 92. The duo then demonstrated a flawless handy round, taking tidy inside turns to fences 2, 3, 4, 6, 9 and 10 for a second score of 92, totaling 184 for the win in the class.

Christina Fisher and her own Levland (Levantos I x Olivia) have also been strong contenders in the $20,000 WEC Hunter Derby 3’6″-3’9″. The pair has earned multiple ribbons in the class throughout the winter and were impressive again this afternoon. Levland and the 13-year-old Holsteiner gelding laid down two beautiful rounds for scores of 89.5 and 90, totaling 179.5 for a 2nd place finish.

Also earning a top ribbon were Stefano Baruzzo and his own Starfighter (Stolzenberg x Caliku). Baruzzo and the 8-year-old Hanoverian gelding earned 11th place in Week 2’s $20,000 WEC Hunter Derby 3’6″-3’9″ and returned this afternoon in search of the top prize. The pair delivered two lovely, consistent rounds for scores of 86 and 81, totaling 167 for 3rd place.

Schatt took time after the class to chat with us ringside about her win, “Diatendro is quite an experienced horse. He does the Amateur Owner Hunters with his owner and I’ve done some derbies on him. He won this derby the first week that we brought him, which ended up going under the lights. He’s gotten great experience with that. I’m glad I got to ride him today. His owner was going to ride him, actually, but when she woke up and saw the weather she decided that she would prefer if I rode him. I was lucky to have the ride and glad that we were able to pull it off.”

She also commented on her 9th place mount, “Cascartini is a great horse. He was really good in the first round, then went in and was a little aware and awake in the handy round, and made a few green mistakes. He’s my up-and-coming derby horse and he is gaining great derby experience. He was 2nd in this derby the last time we were here, so I think he has a great future.”

This morning brought 25 entries to the Stadium for the $15,000 WEC Derby 3′ Open. Competition was fierce with the top three placings earning 90s scores throughout the class, but it was Havens Schatt and Ainsley Sadlo’s Kesh (Kalaslesa De Semily) that prevailed.

Havens Schatt and Ainsley Sadlo’s Kesh (Kalaslesa De Semily) competed in their first hunter derby during Week 2 of the World Equestrian Center — Ocala Winter Spectacular 2021, earning a respectable 2nd place finish. Schatt and the 9-year-old Oldenburg mare returned to the Stadium this morning, taking all four high options and earning a score of 93, the highest first round score of the class. The duo returned for the handy round, navigating a second foot-perfect round with tidy inside turns to fences 2, 3, 5, 6, 8 and 9 and all four high options. They were rewarded with a score of 95 for their efforts, bringing their overall total to 188 to win the class.

Belynda Bond and Gesture LLC’s Santana laid down two impressive rounds in this morning’s derby. Bond and the 9-year-old Warmblood gelding have earned several ribbons in previous World Equestrian Center derbies and the pair was on form again today. They navigated a breathtaking first round, taking all four high options for a score of 92. In the handy round Bond and Santana also chose all available inside turns and high options, earning a second score of 94, totaling 186 for 2nd place. Bond also piloted Gesture LLC’s Norderney through two stellar round in the $15,000 WEC Derby 3′ Open. The pair earned scores of 89 and 90, totaling 179 for 5th place.

Hillary Johnson and Copper Fox, LLC’s Moonwalk (Quasimodo Z x Olavsca-F) rounded out the top three placings this morning. Johnson and the 13-year-old KWPN gelding topped last week’s $15,000 WEC Derby 3′ Open and returned today in hopes of another win. The pair wowed the judges in both rounds, earning scores of 91.5 and 93 for an overall score of 184.5 and 3rd place.

Schatt took a moment to chat with us ringside after the class, “Kesh is the most experienced of my three mounts today. She’s currently competing in the 3’6″ Greens and getting ready to move up to the 3’3″ Amateur Owners. She did her first derby the last time we were at World Equestrian Center, and she wanted to win that derby, too, but I made a mistake in the handy and we ended up in 2nd place. I think she’s going to be a really fun derby horse as she continues to gain experience.”

She also commented on 4th place finisher, Mr. Fox, “We’ve only had Mr. Fox for six days, now. We just bought him for an amateur client of mine, Julia McNerney. I brought him to WEC to get to know him a little, and he seems like he’s going to be a really fun derby horse, too. He was a little weary of the puddles from the rain in the first round, but he came right through in the handy.”

Schatt also gave us some insight on 9th place finisher, Havana, “Havana is a Pre-Green horse and today was her first time showing in the rain, first time doing a derby and her first handy round, so I was thrilled with how well she did. I thought she answered all of the questions in the first round. She’s green, so she was a little late on a change in the handy, but finished the round well.”

Forty-seven entries took to the Stadium this afternoon for the $15,000 WEC Derby 3′ Non Pro. Countless entries scored into the high 80s, but it Heather Wingate’s Monogram (Silvio) that topped the class with Addy Wingate aboard. The 12-year-old Oldenburg gelding typically shows in the Pre Adult Hunters with Heather Wingate, but Addy Wingate had the ride today in the $15,000 WEC Derby 3′ Non Pro. The pair opted for all four high options in the first round, earning a score of 89. They returned in the handy round taking inside turns to fences 2, 3, 5, 6 and 9, along with all four high options, for a score of 88, bringing their overall total to 177 for 1st place.

Just behind Wingate and Monogram were Luke Rinehart and Taylor Johnson’s Cavalli. Rinehart and the 16-year-old Hanoverian gelding often take top ribbons in the Children’s Hunter and Children’s Equitation, preparing them well for this afternoon’s class. The pair navigated two flawless rounds for a pair of 88 scores, totaling 176 for 2nd place.

Steven Saumell and his own Crismas also found two impressive rounds in the $15,000 WEC Derby 3′ Non Pro. Saumell and the 11-year-old Hanoverian gelding compete often in the Amateur Owner Hunters and were well-schooled for this afternoon’s class. The duo earned scores of 91 and 83, totaling 174 for 3rd place.

We caught up with Wingate after the class to chat about her win aboard Monogram, “He was amazing. He’s a great horse. Every distance came up perfectly and he was fantastic. In the handy round, I planned to take all of the possible inside turns. He turned really well and landed on all of his leads. It was just a great ride.”

When asked about Monogram, Wingate replied, “He is actually my mom’s Pre Adult horse. He’s always perfect and super sweet. You can make a mistake and he doesn’t care at all. He’s really a great horse.”

Before the start of the handy round in the $15,000 WEC Derby 3′ Non Pro, the prestigious Style of Riding Award was presented to Paige Beisel for her classic style and her sportsmanship. The Style of Riding Award is generously donated by Bill Rube to be awarded to the rider who best displays the American Style of riding in the ring and sportsmanship outside of the competition arena. The recipient serves as a role model for preserving the integrity and tradition of equestrian sport. “This award is very special to me because the recipient of this award pays it forward both in and out of the show ring,” says Rube. Beisel received an elegant leather duffel bag and wore a white rose corsage on her lapel throughout the handy round to signify her achievement.

The Shapley’s Champion Groom Award for the best turnout in the class was presented to Gerardo, groom of 1st place finisher in the $15,000 WEC Derby 3′ Non Pro, Monogram. Shapley’s is a proud sponsor of the World Equestrian Center and is thrilled provide an award each week of the Winter Spectacular to the groom of the best turned out horse. Gerardo received a Shapley’s Award Bucket for Monogram’s stunning turnout.