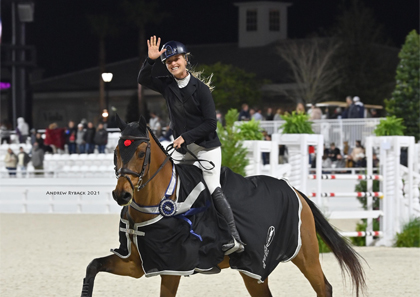 Thrilling equestrian sport filled the WEC Grand Arena today for the $75,000 WEC Grand Prix 1.50m and the $7,500 Futures Prix 1.40m. Courses for the classes were designed by Kelvin Bywater and challenged riders’ technical abilities throughout the day.

This evening’s $75,000 WEC Grand Prix 1.50m featured thrilling equestrian sport under the lights as 42 entries competed for the lion’s share of the prize money, a stunning World Equestrian Center cooler and an elegant bronze trophy from the National Snaffle Bit Association (NSBA). Nine entries advanced to the jump-off with the top three riders separated by less than one second, keeping the crowd on the edge of their seats. Kristen Vanderveen prevailed for the second consecutive week, this time aboard Bull Run Jumpers Six LLC’s Bull Run’s Prince Of Peace (Cardenio x P-Comtesse).

Eight countries were represented in tonight’s class with several Olympians vying for the win. One of the first entries to jump a clear first round was Sharn Wordley and his own Gatsby (Simba x Daisy Cruise). Wordley and the 16-year-old Irish Sport Horse stallion have earned countless placings in Grand Prix classes across the country and were on form tonight. The duo jumped a clear first round with ease in a time of 73.347 seconds, well within the time allowed of 75 seconds, securing a spot in the jump-off.

Kady Abrahamson and Abrahamson Equestrian’s Any (Aljano x Nina XI) also nabbed a spot in the jump-off. Abrahamson and the 12-year-old Holsteiner mare topped the $75,000 WEC Grand Prix 1.50m during Week 5 of the World Equestrian Center — Ocala Winter Spectacular 2021 and returned tonight in hopes of another victory. The pair was quick and clear in the first round in 70.369 seconds, signaling that they would be tough competitors on the short course.

The last to secure a return on the short course were Kristen Vanderveen and Bull Run Jumpers Six LLC’s Bull Run’s Prince Of Peace (Cardenio x P-Comtesse). Vanderveen has been on a roll over the past few weeks, earning two $20,000 Welcome Prix 1.45m wins aboard Bull Run Jumpers Six LLC’s Bull Run’s Divine Fortune (Padinus x Amhilavsca Fortuna) and a $75,000 WEC Grand Prix 1.50m win aboard Bull Run Jumpers Inc’s Bull Run’s Risen (Utopie x Violette). She and Bull Run’s Prince Of Peace took 2nd place in the $20,000 Welcome Prix 1.45m during Week 4 and were hunting for a blue ribbon tonight. Vanderveen and the 12-year-old Holsteiner gelding found a clear first round in 72.661 seconds, guaranteeing a chance at the win.

The course was adjusted as nine entries returned for the jump-off. With few opportunities for inside turns, the jump-off was a true head-to-head race with speed determining the winner. Wordley and Gatsby were among the first entries to contest the short course. With one already clear with a quick time, the pair picked up pace. They cleared the second to last fence, then galloped down to the final oxer. The pair raced through the timers at 41.159 seconds, moving into the lead. As they approached the end of the ring a few strides later, Wordley went right as Gasby went left. Gatsby celebrated his way past the crowd back to the ingate without his rider. Sharn was all smiles as he walked back to the ingate with his fans cheering him on.

Next in the ring were Abrahamson and Any. Having bested her trainer and mentor Sharn Wordley just two weeks ago to win the $75,000 WEC Grand Prix 1.50m, the pressure was on for Abrahamson. She and Any gave the course their all as the turned for the final fence. The crowd rode the final few strides with Abrahamson, roaring as she crossed the timers at 41.402 seconds, just behind Wordley and Gatsby.

Last in the order were Vanderveen and Bull Run’s Prince Of Peace. Although Abrahamson’s time appeared unbeatable, Vanderveen was not going to stand for 2nd place without a fight. She and her fiery gelding blazed through the first eight fences without touching a rail, then turned up the heat as they headed for the final fence with the crowd urging them forward. The stands erupted in applause as the pair flew over the final oxer and through the timers in 40.635 seconds to win the class.

After her well-deserved victory gallop, Vanderveen took a moment to chat with us ringside about her win, “The atmosphere was amazing tonight. The crowd was really into the class and it was so fun to experience that support from the stands. The entries before me were so fast in the jump-off and I was a little intimidated after I saw the first three go. My plan was to start as fast as I could, but feel out the ride and take back if he started to get worried. He really went for it and my competitive edge kicked in, so I pushed the envelope and it paid off. He helped me a lot and gave it his all tonight.”

When asked about Bull Run’s Prince Of Peace, Vanderveen replied, “He has only shown at World Equestrian Center — Ocala once before, so he hasn’t had a lot of experience in this ring. Tonight was his first time under the lights and I would say that he likes them! I’ve had Bull Run’s Prince Of Peace for a few years and I’ve really taken my time with him. He’s a very special horse. I think he’s such a quality horse and I think he has a great career ahead of him. He’s progressed really well and is now able to step up to the plate when he needs to.”

This afternoon’s $7,500 Futures Prix 1.40m saw a field of 46 entries vying for the win over a similar course to that of the Grand Prix. The track for the Futures Prix featured two double combinations and a triple combination. Ten entries found clear first rounds but just five managed to jump double clear, with Shannon Sullivan and her own Downtown’s Main Event topping the class by two seconds in the jump-off.

The pace in the class was set early in the order by Kirk Webby and Tolleshunt Investment Group’s Brando Du Rouet (Baloubet Du Rouet x Carieny Z). Webby and the 16-year-old Oldenburg gelding earned 2nd place in the $7,500 Futures Prix 1.40m during Week 3 and returned to the WEC Grand Arena today in hopes of another top ribbon. The pair was first to jump a clear first round, navigating the course in 67.655 seconds, well within the time allowed of 74 seconds. They continued straight to the jump-off, taking inside turns to fences 15, 16 and 17, and stopping the clock at 40.760 seconds with all rails up, setting the time to beat.

Webby held the lead until junior Izzy Beisel took to the ring aboard David Beisel’s Ammeretto (Numero Uno x Ranna). Izzy Beisel and the 15-year-old Dutch Warmblood stallion have taken ribbons in the Low and Medium Junior Jumpers throughout the winter and stepped up to the 1.40m track this afternoon. The pair delivered a clear first round in 70.960 seconds before advancing straight to the jump off. Beisel and Ammeretto were in it to win it this afternoon, surging through the inside turns and racing through the timers at 40.066 seconds, moving into the top spot.

Beisel appeared unbeatable, but Shannon Sullivan and her own Downtown’s Main Event were set to challenge. Sullivan and the 14-year-old Polish Warmblood gelding have earned top placings in several prix classes and returned this afternoon to face the 1.40m track. The duo was quick and clear in the first round in 69.033 seconds. They continued straight to the jump-off and picked up the pace, knowing the quick time they had to beat. Sullivan and Downtown’s Main Event hugged the inside track and galloped between fences. They flew through the timers at 38.249 seconds, moving to the top of the leaderboard and ultimately taking home the blue ribbon.

We caught up with Sullivan after the class to chat about her win aboard Downtown’s Main Event, “I had such a good time today. I walked my course and it just felt like it was going to be a little tough. I tried to stay careful in my first round, but not too slow, so I could make it into the jump-off. He shines in the jump-off, he loves to go fast and jump off of the inside turn. He loves to take a risk. I’m so excited that we got to do that, it was a super fun ride, especially here at this beautiful venue.”

When asked about Downtown’s Main Event, Sullivan replied, “He is a 14-year-old Polish Warmblood. I imported him five years ago and we’ve been moving up. He’s the coolest, I’m so lucky to have him. He’s the love of my life.”

Sullivan also commented on her business, “I run a 50-stall barn in Frankfort, Illinois, called Downtown Equestrian Center. This is my first time coming to Florida. I’m so excited to be here and I’m so thrilled for our win!”