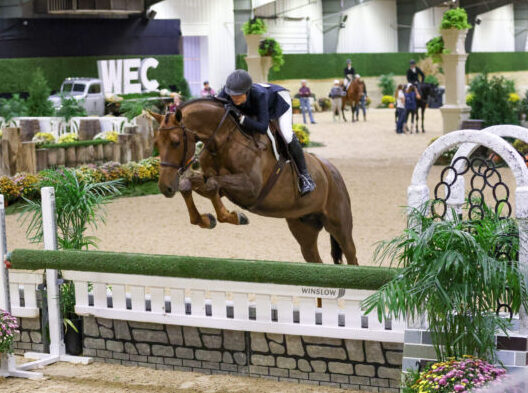 World Equestrian Center’s – Wilmington Fall Classic Week 3 took over the R+L Arena for a splendid day of picture-perfect indoor hunter derbies. It was a dreary Ohio day, but that didn’t stop nearly 60 horse-and-rider combinations from giving it their all. The beautifully decorated, autumn inspired courses were designed by none other than Bobby Murphy of Lexington, Kentucky. Colorful mums, dried corn stalks, pumpkins and plenty of live edge wood tastefully adorned jumps and arena finishes.

The main event this afternoon, held in the R+L arena welcomed sixteen first-rate competitors and their mounts. The $30,000 WEC Hunter Derby 3’6″-3’9″ contestants took to the course vying for a big win and notoriety of winning such a competitive class.

Havens Schatt and Cascartini (Casall Ask x Wilora), the nine-year-old Holsteiner gelding owned by Ken and Amy Wexler LLC, were above the rest. Having two beautiful rounds, this pair charmed judges and those in the stands. Their first round score was extremely impressive and well-done, landing them a two-judged score of 185. They advanced to the Handy, where they showed their skills and earned a 193, taking them to the top of the class with a final score of 378.

Schatt of Milestone Farm LLC in Lexington, Kentucky, took the time to chat with us after her big win. “Marty, as we call him in the barn, hasn’t jumped, but maybe once, since the Derby Finals in August. I wasn’t planning on showing him until we went back to Florida, but one of my clients wanted to come up here and I saw that there would be a $30,000 Derby so he came with us too! It can be hard for our whole barn to get away, but we love showing at both WEC locations! This was a good experience for him because he is still a green horse. Yesterday he tripped after a jump because he was looking at the end of the arena. I had to pull up because he was looking around, and then he trotted in the handy, where he wasn’t supposed to. He had some stage fright and that’s okay… For today, I really just wanted to have a good first round! We did that so overall, I am happy and he is such a good boy!”

Next in the rankings was Morgan Ward and Comissario (Calido x Amabilita). They seemed to work together flawlessly and Comissario, the sixteen-year-old gelding, stepped up to the 3’9″ height with overwhelming victory. The duo earned scores of 178.75 and 196,  totaling 376.75 for second place. During their victory lap after the awards ceremony, Ward confidently removed the bridle. They galloped through the arena and even over a jump with total control and grace.

We caught up with Morgan to chat about her win. “I was really nervous going into this class and I never get nervous! I put a lot of pressure on myself to go 3/3. But we did it! The course was fun and the Handy round had some difficult turns and options that we opted to not take.” Ward and Playmaker earned scores of 88.5 and 90 totaling 178.5 for first place.

Rounding out the top three is David Beisel and Lori Taylor’s MTM Bentley(Bonaparte Z x Hot Cherie P). MTM Bentley and Beisel elegantly jumped to earn a 92 in the Handy round, which was the highest second round score in the class. This score, paired with their first round score of a 85, added up to a total score of 177 to take third place.

Twenty-seven horse and rider pairs contested the Non-Pro course to compete for the big win. This afternoon saw many great rides and great scores. Many landed in the eighties and several soared into the nineties.

It was Kiera Philpot of Manchester, Michigan and Red Roc (Roc USA x Rhea) who took the win. This team has won several Non-pro derbies here at World Equestrian Center and they always seem to lay down impressive rounds and scores. Philpot was first on the course in the Non-Pro this afternoon and set the tone for the class. She earned a 91 in round one, followed by an 89 in round two. Her final score was a leading total of 180.

We caught up with her to chat about her win and her upcoming show schedule. “I loved this course. It was quite fun and we really enjoyed it. My strategy today was to read the course as it was written. I didn’t want to overthink it too much. We plan to stay for all of the Fall Classic shows and I have been using them to prepare for the National Horse Show which happens at the end of the month. I’ve been working on getting the nerves out when it comes to competing in larger classes.” Kiera wanted to thank her trainer, Dorothy Campbell of Just a Folly Farm.

Kelley M. Corrigan and Diatrendo, a 10-year-old Hanoverian stallion, claimed the second place spot. This team held strong throughout the first round, with their score being an impressive 94. Their second trip landed them a score of 81, which added up for a final two round score of 175.

Landing in the third place spot was Luke Rinehart and Chablis 162. This afternoon, Rinehart of Rinehart Farm, Westfield, Indiana and Chablis 162 (Cancara Z x Untreue)  jumped a seemingly-effortless first round, earning a score of 83, followed by an even more perfect Handy round of 89. Their final score was 172, which earned them the third spot.