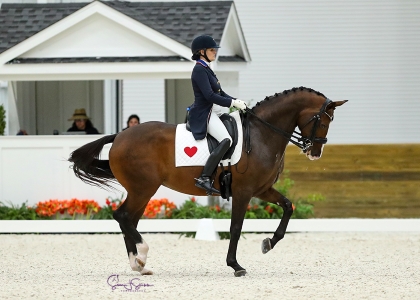 Holzer and Havanna 145, a 14-year-old Hanoverian mare by Hochadel x Rodgau, had the leading score of 71.132% to win the Grand Prix to Freestyle CDI-W class. Codi Harrison (USA) and her own Katholt’s Bossco were second with 70.974%. Naima Moreira Laliberte (CAN) and KML Inc.’s Statesman were third with a score of 69.289%.

Holzer has had Havanna in her barn for six years, and while owner Fellows had been working with the mare earlier in the summer, Holzer took back the ride when Fellows was away. Holzer is excited to ride their freestyle test again, which the pair has not done together in a CDI ring since June of 2019. Their routine is centered around the song “Havana” by Camila Cabello.

“I haven’t ridden it in a long time,” said Holzer. “I’ve schooled it, but not shown it. As you can see, she’s a little spicy because she really has not been in a major ring in a while. It’s a fun, fun freestyle. It’s got some lyrics. It’s a crowd pleaser, I would say, so I’m excited to try it.”

Holzer, who competed at the April CDI at World Equestrian Center – Ocala as well as the August USEF-rated competition, was happy to be back for CDI competition.

“This time we are in the main ring, which is really nice, and they were able to give us a warm-up ring set up in the warm-up area, which has been very, very helpful,” she pointed out. “The facility is an incredible place. It’s just top-notch. We’re so lucky to have it.”

Holzer believes that World Equestrian Center is the perfect spot for her to expose her horses to a different atmosphere and better prepare them to be top international-level dressage horses.

“A few of mine really do need more exposure, so I want to take advantage of this great facility,” she said. “I usually turn my horses out four to five hours a day, and we came up here on Tuesday. As you can see, Havanna is quite wild. It’s another element that we have to think about in the whole way of setting up for a horse show. If we’re in Europe, same thing. The CDI shuts, and you’re in. It’s something you’ve got to think about. I am just so grateful that this place is here.”

Along with improving horses and riders, Holzer feels that World Equestrian Center can help equestrian sport too, comparing a spectator experience in Ocala to what she experienced watching dressage for the first time as a child at the Royal Winter Fair in Toronto, Canada.

“Any of these kids who walk in here off the street and wonder how we make a horse do that, and ‘I want to do that too’; that is what is going to grow our sport,” said Holzer. “We have to keep allowing people to go to different venues, and let people come in and feel comfortable watching. My horse has to learn how to deal with the people. People can be running up and down the seats, and the horse should still be behaving themselves. I think that’s really important, and it’s focusing for the riders too. When people are close by, it’s very easy for you to lose your attention span. Here you’ve really got to sit down and focus. I think that’s all great for us to become better riders and for our horses to become better international horses.”

In the Grand Prix to Special, Howington and Cavalia, a 14-year-old KWPN mare by Sir Donnerhall x I.P.S. Gribaldi, won with a score of 70.609%. Second place went to Susan Dutta (USA) and Don Design DC with 70.022%, while Kerrigan Gluch (USA) and Hampton Green Farm’s Mejorano HGF were third with 67.283%.

Howington has been riding Cavalia less than two years and termed it as “still a new partnership.” She added, “We’re still working things out, but I was happy with her today. It wasn’t my ideal test, but at least she stayed with me and remained calm. That’s always a good thing.”

With Cavalia’s spicy “chestnut mare” attitude, Howington has brought her along slowly. “My goal with her truly is to try to improve every test that I can with her,” she said. “She’s so difficult, so if I can just slowly improve every time, that is my only goal. I have to be very careful. She’s super sensitive.”

With Howington’s ride at 6:20 p.m., she also had to deal with adjusting Cavalia’s schedule. “She felt tired tonight,” acknowledged Howington. “I had to try and get her pumped up to finish. It’s super late for her. I only ride her very early in the morning, so she was like, ‘What is going on? It’s night check time!’”

Howington felt that having the grand prix class at the same time as the special will run on Saturday night was a benefit. “It was good prep for tomorrow, and it definitely made me realize what we need to work on for tomorrow and what we can improve on,” she said. “It’s at dinner time again tomorrow, but it’s fun. It’s good to switch things up.”

While there is room for improvement, Howington said, she did have highlights in this test. “I always love Cavalia’s trot half passes,” she noted. “When she does really pretty one-tempis, they’re super straight and they’re fun to ride because she likes doing them. Those are my favorite things.”

Pablo Gomez Molina and Servus Ymas, an eight-year-old Hanoverian gelding by San Amour I, were victorious in the Prix St. Georges CDI3* with 70.000%. Second place went to Hansel, ridden by Ashley Holzer for P.J. Rizvi. They scored 68.382%. Rebecca Wait and Beirholms Eclaire, owned by Mary Zorzit-Mattingly, were third with 66.422%.

Gomez Molina, who has ridden for Yeguada de Ymas for nearly nine years, has piloted Servus Ymas since the horse was five years old. This is only their third CDI competition together, and the first time they have competed indoors. Gomez Molina was unsure how the young horse would handle the new environment but was pleased with its performance.

With Servus Ymas’s “really big movements,” Gomez Molina said that the key to the horse’s development has been keeping it focused.

“I think the most difficult part with him was to keep him really straight because he wants to move big, so he is a little bit like a snake,” he explained. “He is so clever, and he always tries to give everything to you. He keeps improving every day. Our goal is to arrive to Grand Prix, and I think he has the quality for it, so we will keep working on that.”

Gomez Molina felt that the strongest part of his Prix St. Georges test was the extended movement in the trot and canter. “The flying changes are really uphill and big too,” he said. “I think in the future, the half passes and the pirouettes are going to be better when he gets a little bit stronger. They are going to be really nice soon.”

This is the first time Gomez Molina has competed at World Equestrian Center – Ocala. “It’s impressive,” stated the 28-year-old rider from Valencia, Spain. “All of the facilities are incredible. To come here and actually have an indoor arena cool with air conditioning is amazing. The horses really feel good. They are more fresh and willing to go. They are happy.”