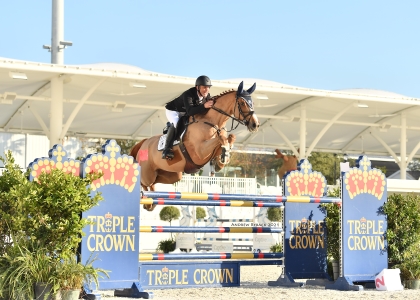 Tynan and Ballinteskin Joe navigated a lovely first round toward the end of the order, stopping the clock at 81.179 seconds. Tynan has had a partnership with Ballinteskin Joe for quite some time, “We bought Max [Ballinteskin Joe] as a six coming seven-year-old. He is ten years old now. He has always been a super horse, but we didn’t jump him that much while he was a young horse. He had a lot of talent, but his brain needed to catch up with him. Now that he’s matured, he is a winner and an incredible horse.”

Tynan and the 10-year-old Irish Sport Horse gelding advanced straight to the jump-off, “In the first line I walked a six or a five, I ended up doing six on Max because he is naturally quick. Then we made a super quick roll back to the next fence and we galloped whenever we had a chance. In the last line there was an option to do four or five home and I decided to do the add again because he is so fast off the ground. Harold [Chopping] did the four home, so I thought maybe I was going to have to but luckily I was still able to get the time with adding.”

Tynan and Ballinteskin Joe raced through the finish stopping the clock at 34.930 seconds for the win.

Andrea Torres Guerreiro of Columbia and her own Fifty Shades (Call Me Number One x Sheltana) took home second place honors in this morning’s $15,000 WEC Ocala 1.40m Jumper Classic. Guerreiro and Fifty Shades were the first horse-and-rider pair to enter the class, delivering a fault free first round stopping the clock at 78.717 seconds, well under the time allowed of 84 seconds. Guerreiro and the 13-year-old Westphalian gelding jumped-off immediately, flying through the entire course not pumping in the breaks once to stop the jump-off clock at 35.819 seconds, a time that no other competitor could catch until Tynan and Ballinteskin Joe entered the ring.

Rounding out the top three in this morning’s $15,000 WEC Ocala 1.40m Jumper Classic was Canada’s Harold Choppping and Rein Family LLC’s Gerderieka II VI. Chopping and Gerderieka II VI delivered a smooth and clear first round stopping the clock at 82.400 seconds. Chopping and the 10-year-old Dutch Warmblood mare advanced straight to the jump-off soaring easily over each fence while taking tight inside turns and leaving out strides to stop the clock at 36.965 seconds to earn third.

Saturday afternoon’s $10,000 WEC Ocala Futures Prix 1.30m-1.35m saw a competitive field of 30 entries compete for the top prize over a course built by Catsy Cruz of Mexico. The FEI Level III course designer developed a technical track that featured multiple difficult bending lines and a tricky double combination off of a tight turn. Fourteen entries managed a clean round and seven jumped double clear, but it was Derek Petersen and his own Zechariah 3:9 (Zirocco Blue x Katrina) that captured the fastest time.

Petersen and Zechariah 3:9 have had a successful week, earning second place during Thursday’s $15,000 WEC Ocala Welcome Prix. Petersen has to hold himself back from doing more with the amazing seven-year-old Dutch warmblood, “It is so hard to control myself and not put him in the Grand Prix. He is so amazing, and I know he would easily be able to do it, but I want to really develop him and continue on this successful path.”

Petersen and Zechariah 3:9 produced a flawless first round toward the end of the order, easily soaring over each fence to stop the clock at 73.903 seconds, well within the time allowed of 79 seconds. “He will always be a fast horse. The gas pedal is instantaneous. If you think fast, he just goes. If you soften just a bit, he is gone, but he is super rideable which makes him even more amazing. He is quick off the ground and can turn on a dime. I have never felt anything like it before. He is like riding a jet engine with unlimited horsepower.”

Petersen and Zechariah 3:9 advanced straight to the jump-off, starting on a nice gallop to the Coca-Cola Beverages Florida vertical to swiftly turn back to the bending line. The pair effortlessly left out a stride to soar to the red oxer. Petersen and Zechariah 3:9 quickly rolled back to the vertical to gallop to the double combination, leaving out another stride in the last line. The pair flew through the timers, stopping the clock at 37.108 seconds for the win.

Second place was claimed by Will Simpson and Molly Kenney’s Fashion Prince (For Edition I x Lina V). Simpson won the $15,000 WEC Ocala Welcome Prix earlier in the week aboard Whoop De Doo. Simpson also won the $75,000 Coca-Cola Beverages Florida Grand Prix Saturday evening. Simpson and the 11-year-old Hanoverian gelding delivered a fast and smooth first round stopping the first round clock at 75.963 seconds. The pair jumped-off immediately, soaring over the first three jumps to make a very tight turn back to fence five to fly to the last, stopping the clock at 37.560 seconds to earn second.

Megan Wexler and Flynn Farm’s Flashdance (For Edition x Virginia II) rounded out the top three in Saturday’s $10,000 WEC Ocala Futures Prix. Wexler and the 11-year-old Hanoverian gelding navigated a beautiful first round, cruising through each bending line to stop the clock at 75.365 seconds. The pair advanced straight to the jump off, easily leaving out strides while taking tidy inside turns, stopping the jump-off clock at 37.799 seconds.