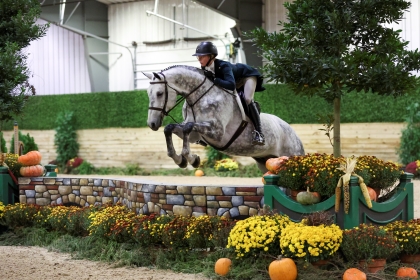 This week’s Wilmington Sunday Spotlight shines on accomplished junior rider, Skylar Wireman of Bonsall, California. Wireman has secured a long list of victories throughout her junior career at top shows. Earlier this year she drove away in a brand-new car after winning the WEC Premier Equitation Cup Championship at WEC – Ocala. Within the past month she scored the title of Grand Junior Hunter 3’6” Champion at Capital Challenge and was reserve in the 2022 Dover Saddlery/USEF Hunt Seat Medal Final at the Pennsylvania National Horse Show. We sat down with Skylar to learn more about what she’s been up to since the WEC Premier Equitation Cup Championship.

WEC: What have you been up to since the WEC Premier Equitation Cup Championship?

After the winter circuit we were able to go home to California for a good portion of the Summer. It was nice being home, because I could finally drive the new car that I won. I absolutely love it.

During the summer we stayed local, but lucky enough there were some great championships in San Juan Capistrano, California. In July, I competed in the 2022 USHJA Gladstone Cup Equitation Classic on MKT Investment’s Famous. We led the class from the beginning, and I really enjoyed the final round. When they asked the top six to return, we got to switch horses. I ended up riding Paige Walkenbach’s horse, Let’s Go. It was a bit tricky because her horse and Famous are very different, but I enjoy riding new horses. It was a tough class with 80 top competitors, but we managed to stay on top and secure the champion title. That week I also earned

Then in September I returned for the NHSAA/ASPCA Maclay Region 8 Championship. I won that class back in 2020, and I was hoping to win it again. I also rode Famous for that class too.

We got Famous last year as a 1.30m jumper and I did the work to turn him into an equitation mount. He shines in those classes. He has such a nice rhythm and will perform great anywhere.

After that we went across the country to show at Capital Challenge where I earned the Champion title in the Section.B 17 Equitation. I received third place in the Palm Beach International North American Junior Equitation Championship and was awarded the EMO Equitation Trip of the Show with a score of 90.5.

I was in shock at how well I did at that show. They were competitive classes and the scores in each class were very high. I am beyond grateful to have ridden two amazing horses and to have done so well at such a big championship venue.

Right after Capital Challenge we made our way to the Pennsylvania National Horse Show. I had great placings on both Bonne Starlight and the Coastal horse that I won the Non-Pro derby on last week at WEC – Wilmington. In the beginning of the week, I won the Equitation Warmup class with a score of 92 on Famous then received Reserve in the Dover Saddlery/USEF Hunt Medal Seat Medal Final.

When Pennsylvania National Horse Show ended, we were back on the road and headed to World Equestrian Center – Wilmington.

WEC: Which horses did you bring to World Equestrian Center – Wilmington?

I was able to show a few horses that didn’t show that much at the other shows, like Coastal. We also had a few clients that did the WEC Premier Equitation Cup qualifier.

We love both WEC facilities. We have shown a bunch at the Wilmington location. Both locations cater to the horses, and everyone is so nice. WEC – Wilmington has become a second family. I have just been to WEC – Ocala once for the Premier Equitation Cup, and I couldn’t believe what I was seeing. To ride in the WEC Grand Arena it’s like no other feeling. It’s truly Disneyland for horses.

WEC: Where are you off to next?

I will head over to the Washington International Horse Show to compete in a few hunter and equitation finals. Then we get right back on the road and meet up with the rest of our team at the National Horse Show in Lexington, Kentucky, where I will do some equitation and jumpers!

Thank you, Skylar, for taking the time to chat with us! Congratulations on all your accomplishments and good luck with the rest of your 2022 competitions!