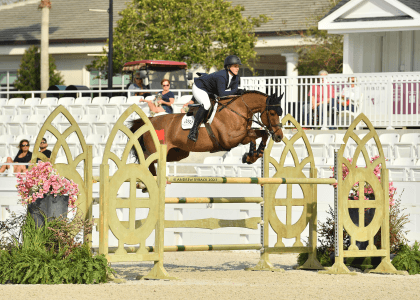 At the conclusion of the first round Luis Sabino Goncalves, Samantha Schaefer, Tracy Fenney, Lauren Balcomb, William Simpson and Hunter Holloway rose to Lima’s first round challenge with Schaefer claiming two of the seven spots in the jump-off.

Samantha Schaefer (USA) followed aboard her first qualified mount Frasier (Carambole x Bloem). The pair flew around the track, beating Goncalves’ time in 37.487 seconds, but had an unfortunate rail at the second to last fence.

The next pair in was Tracy Fenney (USA) and her new partner MTM Hachi. Fenney and MTM Hachi put forth a stellar performance but finished just a few seconds after in 40.026 seconds.

Lauren Balcomb (AUS) and the speedy 12-year-old Zangersheide gelding Verdini D’Houtveld Z (Verdi x Laska III) were the next pair down the ramp with the goal of snagging Goncalves’ fast time. The pair soared around the track, but galloped through the timers just one second short in 38.550 seconds, eventually earning third place.

Schaefer and the nine-year-old Dutch Warmblood gelding James Bond HX were the final pair to return to the WEC Grand Arena.

“It was nice to have gone first on Frasier. I know that ‘James’ has a big step, and Frasier has an abnormally large step, so after I was able to get the seven done easily with Frasier, I knew if I committed, I could get the seven with James,” told Schaefer.

The new pair raced around the short course, finding each fence right out of stride while navigating tidy turns to stop the jump-off clock at 37.039 seconds to cinch the victory.

James Bond HX is a very special horse to Schaefer, “James Bond HX has a bit of a back story. Kate Conover got a video of James from Thaisa Erwin. I had been casually looking, because Frasier has been my only show jumping horse for two years now and I was thinking about potentially getting another one.”

“I ended up trying him over a few single jumps in Kentucky and I really liked him. So, we set up a date where I could go to her farm to jump him around a full course. Well, during that interim, we were talking about his breeding, and it turns out that his mother, Trezebees was the horse that I won Young Riders on my last junior year. After finding that out, I knew it was meant to be,” Schaefer expressed.

“I can’t thank Kate Conover and Thaisa Erwin for bringing James Bond into my life. I am so grateful for all his owners, Donna Maher, Beverly Rohrbaugh, Liz Tarumianz, Morris and Stacey Weiss. He’s such an incredible horse and I am so happy he found his way to me,” Schaefer shared.