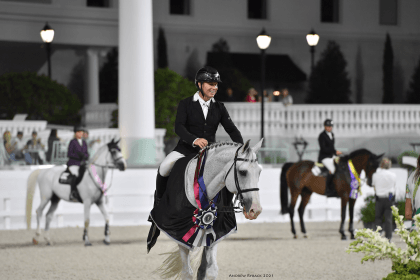 Sunday’s feature class action kicked off with the $15,000 WEC Ocala 1.40m Jumper Classic. Twenty-seven entries took to the WEC Grand Arena to compete for the top prize over a course designed by Mexico’s Catsy Cruz, a FEI Level III course designer. Ten entries managed a clean first round and three jumped double clear but it was Chloe Reid and Crossover 4 who took home the first place award.

Reid and the eight-year-old Hanoverian gelding entered the class toward the bottom of the order, delivering a clean and smooth first round in 70.072 seconds, well under the time allowed of 76 seconds. Reid and Crossover 4 (Cascadello x Chakira) advanced straight to the jump-off, taking tidy inside turns and forward distances to stop the clock at 38.080 seconds for the win.

Saturday evening hosted another exhilarating Saturday night grand prix as 39 entries vied for the win in the $75,000 Stella Artois Grand Prix brought to you by Tri-Eagle Sales. Catsy Cruz designed the technical tracks that included a tricky triple combination and double combination that tested multiple riders throughout the night. Eight entries achieved a clean first round and four jumped double clear, but it was Olympic rider, Sharn Wordley that captured both, first and second place.

New Zealand’s Wordley completed his first clean round aboard his own Casper. The pair had a recent win just last week in Sunday’s $15,000 WEC Ocala 1.40m Jumper Classic. Wordley and the 15-year-old Oldenburg gelding delivered a smooth and clean first round, stopping the clock at 75.193 seconds. Wordley came back to the WEC Grand Arena toward the end of the order with his second clean round ride, Gatsby (Simba x Daisy Cruise). Wordley and Gatsby have had previous success during the World Equestrian Center – Ocala Winter Spectacular earning a grand prix win. Wordley and the 17-year-old Irish Sport Horse stallion delivered a very fast and clean first round stopping the clock at 71.735 seconds, well under the time allowed of 77 seconds.

Wordley first returned to the jump-off on Casper (Contender x Falubet). The pair started off on a nice gallop to fence one then rolled back to the vertical in eight strides to gallop to the double combination. Wordley and Casper soared over the oxer and galloped to the last bending line, leaving out a stride to stop the clock at 36.782 seconds, setting the pace for the remainder of the jump-off.

Multiple riders challenged Wordley and Casper’s time, but none could capture the speed until Wordley returned on Gatsby. Wordley and Gatsby were the second to last pair to return to the jump-off. Wordley rode the jump-off on Gatsby similar to how he rode the course on Casper, “I did the same exact striding on both horses, and there ended up being four hundredths of a second between them.” Wordley and Gatsby flew through the course soaring to the top of the standards to stop the clock at 36.747 seconds for the win.

Earlier Saturday afternoon, forty entries challenged the $10,000 WEC Ocala Futures Prix 1.30m – 1.35m but it was Bryn Rose Sadler and Showcase 81, LLC’s Cezarro that took home the top prize. Sadler and Cezarro were the fifth entry to enter the class and the first entry to move on to the jump-off. Sadler and the 13-year-old Brandenburg gelding jumped a clean first round, stopping the clock at 70.483 seconds. Sadler and Cezarro (Cesaro x Nabell) jumped-off immediately, soaring through the entire course not pumping the brakes once to stop the jump-off clock at 32.998 seconds for the win.

Week VII’s Derby Friday saw more than 45 horse-and-rider combinations challenge the $12,500 WEC Ocala 3’6”-3’9” Hunter Derby and the $10,000 WEC Ocala 3’ Hunter Derby. Doug Russell designed the winding tracks for both courses. The courses showcased inviting natural obstacles with three high options in each class. The handy round presented several options for tidy inside turns to show off athleticism and adjustability.

Earlier Friday morning, Isabel Harbour and her own Lost Art hunted to victory in the $10,000 WEC Ocala 3’ Hunter Derby. Harbour and Lost Art delivered a lovely first round taking all three high options to earn the class’s highest first round score of 89. Harbour and Lost Art were the last pair to return for the handy jumping fence one and two perfectly to slice fence three. The pair took a tight inside turn to the double combination to roll back to the trot fence. After the second to last fence the pair took a very handy inside turn to last fence to earn a second-round score of 88, for a two-round total of 177.

Fenney and MTM Farm’s MTM Dolce Vita (Philadelphia x Diarado) were the second to last pair to enter the class, delivering a clean and fast first round stopping the clock at 70.587 seconds, well under the time allowed of 77 seconds. Fenney and the nine-year-old Holsteiner mare advanced straight to the jump-off, jumping fence one on a left to right angle that set them up to soar through the rest of the course not pulling the reins once to stop the clock at 43.690 seconds to earn Fenney another feature class win.

Congratulations to all entries on another thrilling week of equestrian sport!