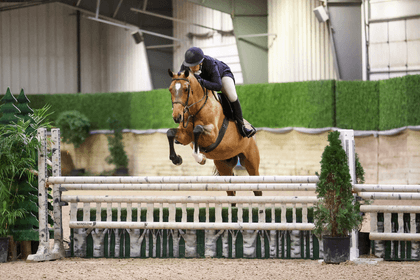 Alder’s track started off with a rolltop vertical and a long-run single oxer, offering riders the opportunity to establish a consistent, rhythmic pace. Throughout the long, flowing bending lines and an inviting two-stride, the field of horses demonstrated incredible scope and athleticism, though none impressed the judges with their style like Copa Du Cache.

Caya, of Integrity Farm in Oconomowoc, Wisconsin, dominated the class, earning first and third place honors. Her top mount, Copa Du Cache owned by Colleen Nagy White, never missed a beat and was the only horse in the class to earn a pair of 90’s. Caya shares about Copa Du Cache, “I have had him through his pre-green year. His owner lets me do a lot with him and she shows him sometimes in the adults. We are going to keep coming back here with him this winter and he is qualified for derby finals so that will be our goal!”

The duo was the last to return for the handy with a first round score of 90 looking to hold on to their top spot. The ten-year-old Belgian Warmblood gelding jumped an impeccable round with Caya in the irons, making each inside turn while maintaining a smooth, even canter through the entirety of the track. Securing a handy score of 91, the duo reached the highest overall score of the day of 181 to take the blue ribbon.

Caya piloted her second mount, Eurythmix to the yellow ribbon in the competitive class. The nine-year-old Warmblood gelding owned by Susan Winchester showcased experience beyond his years in the hunter ring, posting scores of 88 and 89 for a two-round total of 177.5 to round out the podium.

“I made some tighter turns on him [Copa Du Cache] because I know him better. Eurythmix is a little bit greener, so I tried to be more cautious on him. I just tried to be smooth, it is always tough competition here,” Caya comments on her approach in the handy.

“Chablis [Chablis 162] is great, we have had her for about a year now and she was my brother’s horse first. I have been riding her a lot this year and she is really fun. Today I wanted to focus more on having good jumps rather than inside turns and keeping a consistent speed, so that as my plan going but some of the turns worked out really well,” shared Rinehart.

The aspiring junior rider laid down a solid first round including all of the track’s high options to earn a score of 87 . Returning for the handy in second place, Rinehart guided the seasoned mare to flawless handy turns, allowing her to jump in top form, impressing the judges for a score of 88 and a two-round total of 175 that added a top win to her growing record.