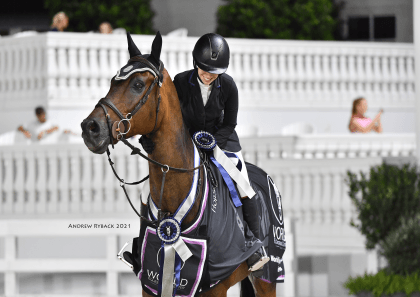 Thursday’s $15,000 WEC Welcome Prix kicked off the feature competition at the Ocala Summer Series horse show with a field of 42 entries. Only seven horse-and-rider pairs produced fault-free rounds to qualify for the jump-off. It was Jenni McAllister and her own Escada V S (Escudo x For Feeling) that took victory in the class with tight turns and accuracy, stopping the clock at 42.821 seconds.

The first Derby Friday featured the $12,500 WEC 3’6”-3’9” Hunter Derby and the $10,000 3’ Hunter Derby. More than 50 horse-and-rider combinations took to the Captive One Indoor Arena to compete a course designed by Tucker Williams of Ocala, Florida. Each course contained stunning natural fences with several high option fences throughout.

It was Erin McCabe Clayton of Ocala, Florida, and Champs Élysées (Norman Pre Noir x Mouette De Cresnay) owned by Bays and Greys, LLC, who delivered a beautiful first round taking four high options to earn a total score of 86. Clayton and the recently imported nine-year-old Selle Francais gelding returned for the handy round and performed a gorgeous course which featured sliced fences and forward distances for a score of 82.5, giving them a combined total of 168.5 for the win. It was a solid win for the newly-minted hunter that was competing in only his second show in the derby division.

On Friday, Kim Barone of Loxahatchee, Florida, and Dialicious, and eight-year-old Brandenburg gelding owned by Cynthia Bulwicz, topped the $10,000 WEC Ocala 3’ Hunter Derby. The dynamic pair that have partnered together for four years faced a competitive field of 36 horse-and-rider combinations. Dialicious and Barone started off the competition strong with a first-round score of 88, the second highest score in round one. With a change in plan to be much handier and take the daredevil route, Barone and Dialicious earned the highest handy round score of 90, for a two-round total of 178 for the win.

Saturday night’s $50,000 Golden Ocala Golf & Equestrian Club and Royal Shell Real Estate Grand Prix saw 44 entries over a course designed by Manuel Esparza of Mexico. Sixteen entries advanced to the jump-off making in the very competitive field, but it was junior rider Catalina Peralta and Wendy Peralta’s Conti (Contender x Patina IV) who captured the win. Peralta and Conti started the jump-off efficiently, leaving out a stride from fence one to fence two. Peralta and Conti galloped through the rest of the course, stopping the timers at 37.648 seconds, more than 1.5 seconds faster than the second-place finishers, Camille Maddrix and Jack Straw. This class marks Peralta’s first time ever winning a Grand Prix and she accomplished this amazing win in her last junior year.

Saturday afternoon’s $7,500 Futures Prix hosed 20 horse-and-rider combinations in the WEC Grand Arena. Seven pairs qualified for the jump-off but it was Karl Beyer and Hannah Matt’s Emeraldo an eight-year-old Warmblood gelding, who took the win in the class. Beyer and Emeraldo stayed in the WEC Grand Arena after their first round to contest the second round course immediately. With tight turns and forward distances, Beyer and Emeraldo stopped the clock at 36.410 seconds for the win.

Wendy Rice and Meadowood Farm, LLC’s Sandrimo took home the blue ribbon in the $7,500 Non Pro 2’6’ Hunter Derby. The duo rode two beautiful courses with both rounds scoring a high score of 85, equaling a total score of 170 for the first place ribbon.

Congratulations to all entries on a great first week of NSBA Summer Series hunter/jumper show at World Equestrian Center – Ocala!

Additional prize money has been added for the next three weeks of shows June 16-20, June 23-27, and June 30 – July 4 in celebration and appreciation of the outstanding support the WEC Ocala Summer Series has received. Visit wec.net for more information and the updated Summer Schedule.