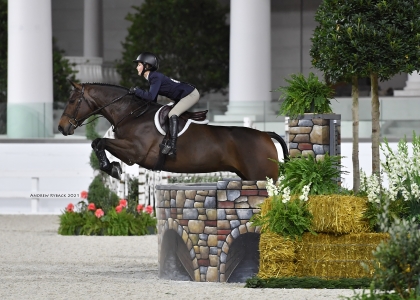 February 4, 2022 ­– Ocala, Fla. – Junior riders will have the chance to compete for the top prize in the Premier Equitation Cup Championship on February 12, 2022, during Week VI of the World Equestrian Center – Ocala (WEC) Winter Spectacular Show Series in Ocala, FL. This championship final, which is expecting 90 riders, will be held for the second year in a row in Ocala and offers a new Ford Explorer as the winner’s prize, as well as $100,000 in trainer awards.

The three-phase championship final features jumping, flat and test phases and gives junior riders the opportunity to compete under the lights in the WEC Grand Arena. In 2021, 59 talented riders entered the competition hoping to drive away with the new car, which ultimately went home with winner Dominic Gibbs. Alexander Alston, Isabella Ehman, Alivia Kohus, and Baylee McKeever were four junior equitation riders that vied for the coveted title.

Isabelle Ehman of Milton, GA, was thrilled with the opportunity to ride her mount Firelight in the WEC Grand Arena under the lights in 2021. This was the rider’s first time competing in a night class.

“It was a little intimidating at first,” explained Ehman of competing in the WEC Grand Arena. “Being able to walk down the ramp into that ring was amazing and an awesome experience. When I went into the ring, I took a deep breath; all of my nerves went away, and I got into the zone.”

Ehman was also impressed with the winning prize being a brand-new car, and she is ready to return and compete again in 2022.

“At first when someone told me you could win a car, I didn’t think they were serious,” said Ehman, who trains with Don Stewart. “It was nice to compete for something other than a big ribbon and a photo. It makes you want to be a little bit more competitive.”

“I have a lot more confidence going in this year,” continued Ehman. “It’s nice knowing that I’ve already done it, and I have so many people around to support me. I’m looking forward to trying to win the car!”

Baylee McKeever of Brewster, NY, also had a terrific time competing her trainer McLain Ward’s Salvatore in the 2021 championship, and she is looking forward to competing in the one-of-a-kind equitation class for a second time. McKeever was impressed with the WEC – Ocala showgrounds as well as the attention that the class received.

“We went there knowing it was a great show facility, and it really lived up to that,” recalled McKeever of WEC – Ocala. “It was really spectacular to ride in the [WEC Grand Arena.] They brought in all new jumps and there was a big atmosphere for that night, so it felt important. That was my first time competing under the lights, and I really enjoyed it.”

Alivia Kohus of Union, KY, competed her own Cristallo’s Carlchen P in 2021. Kohus, trained by Diana Conlon, enjoyed competing in a championship that offered a different experience than typical equitation classes or finals.

“I was just so excited to go under the lights because usually only the big grand prix classes or international hunter derbies get that opportunity,” explained Kohus. “I’ve also never seen a prize so big for an equitation class before. I think the numbers in the class will grow every year because it was a better experience than competing in a lot of the equitation year-end finals. The facility was so impressive, and the atmosphere was amazing. It was overall such a good experience.”

Alexander Alston of Gahanna, OH, piloted Peacock Ridge LLC’s Canny Windsor Z to an eighth-place finish in the 2021 final. Alston, trained by Missy Clark and North Run, is excited to return and try to claim the winning prize this year.

“It was a great experience for sure,” described Alston. “It was exciting to compete for a car. Normally when there’s that amount of prize money it’s an open division and not just a junior class. I’m excited to go back and compete this year and to see how far the horse show has come in the past year. I can’t wait to stay at the hotel too, now that it’s finished.”

In addition to the extraordinary rider accolades, the 2022 Premier Equitation Cup Championship will offer $100,000 in bonus awards for the trainers of the top three riders, with $40,000 going to the winning trainer, $30,000 to the second-place trainer and the third-place trainer receives $20,000. A wild-card trainer bonus will also be chosen from all trainers involved in the class who have not yet received a bonus and take home $10,000.

John Haime, a well-known performance coach to some of the world’s top athletes as well as the author of a new book, “Ride Big,” will be at WEC – Ocala to mentor Premier Cup athletes and parents. Haime will host two informational sessions, a guided course walk with course designer Bobby Murphy, a book signing and more.