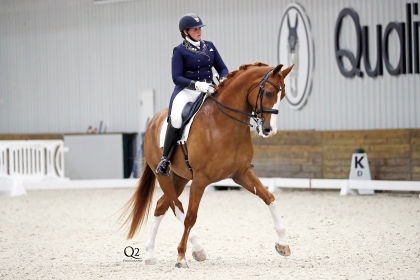 January 24, 2023 – Ocala, Fla. – The Dressage VIII and Dressage VIIII shows on January 19-22, 2023, at World Equestrian Center – Ocala ran classes from Training Level to FEI Grand Prix. The show is an official qualifying competition for the 2023 Great American/USDF Regional Championships and was sponsored by Hampton Green Farm and Discover Dressage. The shows were the first rated dressage shows of the year at WEC – Ocala, kicking off a full calendar of expanded dressage action planned for the world-class facility in 2023.

One of those capitalizing on the opportunity to compete at the very top level was Jodie Kelly-Baxley. Riding her own Grayton Beach in his very first tests at the level, Kelly-Baxley racked up a pair of wins on the 12-year-old gelding, chalking up 71.739% on Friday and then a spectacular 75.761% the following day.

“This was his first grand prix, and it was a really big milestone,” said Kelly-Baxley. “I was a little apprehensive about whether he was ready, but are we ever fully ready? On Friday I went in and was a little too careful as I was so worried about overfacing him. He only gets worried when he makes a mistake, so I didn’t want to ask too much. It was a little underpowered but he still got over 71%. I was a little nervous, and I’m not one to get nervous.

“On Saturday I was more myself and ready to rock and roll — and it paid off,” added Kelly-Baxley, who is from Destin, Florida. “Grayton is a really big guy with very big movement and the one-time changes have been a real struggle just because he has such a big canter. He got all 15 of them — they weren’t pretty, but they will get better. That was a really big accomplishment for him.”

Kelly-Baxley has owned the 17.3-hand gelding by Negro x UB40 since he was three after her Dutch trainer Toine Hoefs found him in Holland.

“He’d been looking for a horse for me and called me one day and said, ‘I’ve found your horse.’ He was three and I could barely steer him, but I brought him over straight away. He’s a really special guy and an amazing character, but needed help organizing his long legs. I’ve been careful and taken it really slow because of his size. It’s paid off. It was a super special and really fun weekend,” added Kelly-Baxley, who reports that the friendly gelding’s favorite treat is Nerds Gummy Clusters.

Kelly-Baxley is wintering in Ocala to be close to both World Equestrian Center and her trainer, Anne Gribbons. Gribbons could not make it to the show but watched closely on the live stream and took notes on each movement, advising on how to boost the score from Friday’s performance to Saturday’s top score. Kelly-Baxley will stick to national shows for now with Grayton Beach, but her loftiest goals are to represent the United States on him one day.

In Saturday’s FEI Prix St. Georges class, Nora Batchelder scooped two of the top three places, claiming victory on Improv 40Z with 70%. Grayton Beach’s damsire, UB40 is the direct sire of Improv 40Z, who is out of a Rousseau dam and was bred in the U.S. by Sandi Lieb, who still owns him. Improv 40Z – another who is 17.3-hand horse – went on to net 72.059% at Intermediate I to finish second behind Tammy Feldmann on Free Tyme (73.235%).

Batchelder claimed another win at Prix St. Georges level – and her highest score of the show – when she rode Francis S3 to 73.824%. The eight-year-old mare by Franziskus is owned by Carol Glover. Batchelder’s final win came aboard another of Glover’s horses, the 17.1-hand Divo, by Washington. She piloted him to 68.085% in the FEI Test of Choice class, topping the leaderboard riding the FEI Grand Prix Special.

Jennifer Marchand had an extremely full-on weekend, riding a staggering 21 tests over the four days of competition. Nota Bene lived up to her name, delivering two scores over 72% at Training Level. She is a five-year-old Dutch mare by Daily Diamond who is owned by Mary Ann Hall. Two of Marchand’s other horses, Florencia and Intrepid, each delivered further scores north of 70%. In total, she claimed 10 blue ribbons.

Dana Cooke contested 22 classes at the show, winning three of them. Her top score –77.297% – came at Third Level thanks to Kingfisher Park Equestrian’s nine-year-old gelding Quatro. She was beaten in that class by Elisabeth Halliday-Sharp on Deniro Z (77.568%). Quatro, by Quaterstern, went on to win his three other tests at the level.