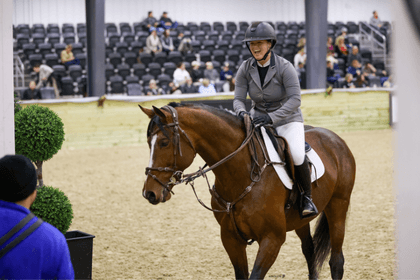 Wilmington, Ohio – Competition during Winter in the Midwest Series 2023 Winter Classic #6 at World Equestrian Center – Wilmington concluded with thrilling wins in both the hunter and jumper rings. Nicole Loochtan dominated the $30,000 Grand Prix aboard It’s Me Du Bosquetiau while Kathleen Caya earned first and second place honors with her two mounts in the $15,000 USHJA National Open 3’ Hunter Derby.

Loochtan silenced the crowd Saturday evening with her brand-new mount It’s Me Du Bosquetiau (Dayton Sitte x Mirette Du Bosquetiau) in the $30,000 Grand Prix. As the second to last to go in the class, the young professional looked to find her place in the jump-off and proved unbeatable as she jumped a seemingly effortless clear round. Returning as the final pair in the jump-off, she guided her very own nine-year-old Belgian Sport Horse stallion to a jaw dropping jump-off round. The pair secured the win in 45.822 seconds and set the tone for a tremendous future ahead.

“Marvin [It’s Me Du Bosquetiau] is the best horse in the world. This is only my second week showing him. I spent a month with him in quarantine over at Spy Coast Farm and I got to know him a little bit. We brought him right up here and he has been double clear in every class he has been entered in. He was fourth in both the Welcome and the Grand Prix last week at Winter Classic #5. I am really looking forward to the future with him,” shared Loochtan on her talented stallion.

Luke Rinehart and Captain America notched the $10,000 Futures Prix win yielding the only double clear effort of the class. The fierce junior rider, training with his father out of Rinehart Farm in Westfield, Indiana, piloted the nine-year-old Hanoverian gelding through the timers in a quick 37.787 seconds to take the win.

“My dad wanted me to leave out and do six strides up the first line, but I did not jump in the way that I wanted to, so I steadied and did seven. It was huge oxer off the turn, so I didn’t want to run at that. I made a few tidy turns, so I kept it in the middle of going fast and just leaving all the rails up,” Rinehart spoke on his jump-off.

Friday evening in the R+L Arena saw Kathleen Caya and Copa Du Cache (Cooper VD Heffnick x Urtoucha VD) at the top of the leaderboard. The duo impressed the judges panel to earn the highest overall score of the day with a first round score of 90. Returning last for the handy round, Caya of Integrity Farm in Oconomowoc, Wisconsin, and the ten-year-old Belgian Warmblood gelding earned a second-round score of 91 for an overall of 181 to take the win. Caya also earned third place honors aboard Eurythmix.

Caya shares about Copa Du Cache, “I have had him through his pre-green year. His owner lets me do a lot with him and she shows him sometimes in the adults. We are going to keep coming back here with him this winter and he is qualified for derby finals so that will be our goal!”

Elizabeth Rinehart captured her first ever derby win Friday afternoon in the $15,000 USHJA National Non-Pro 3’ Hunter Derby on Chablis 162. Rinehart, riding out of her family establishment Rinehart Farm in Westfield, Indiana, displayed two textbook hunter rounds on the 13-year-old Holsteiner mare. The duo claimed scores of 87 and 88 for a two-round total of 175 to take the win.

“Chablis [Chablis 162] is great, we have had her for about a year now and she was my brother’s horse first. I have been riding her a lot this year and she is really fun. Today I wanted to focus more on having good jumps rather than inside turns and keeping a consistent speed, so that as my plan going but some of the turns worked out really well,” shared Rinehart.

On Thursday evening, Izzy Beisel and her own Diaz Barbotiere (Messire Ardent x Quambera Barbotiere) emerged victorious in the $10,000 Welcome Stake. As the second to enter the Sanctuary and first to jump-off, Beisel, training with her father at David Beisel Stables, easily answered the course’s challenges and took the blue ribbon in a blazing fast time of 28.065 seconds.

“We have been practicing a lot on turning and being more efficient. He [Diaz Barbotiere] is still fairly new to me, and we haven’t done super big classes. This was a really good course, we landed from one and there was a nice tight turn there for us to practice. He is small but he has a massive stride, so it was really fun to land and gallop and then practice a little balance at the end to the in-and-out,” Beisel commented about her ride.

Congratulations to all entries on a successful show week of Winter in the Midwest 2023! We look forward to having you back for Winter Classic #7.