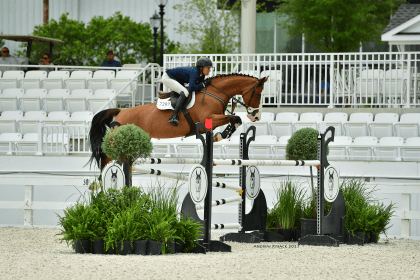 Week IV of the World Equestrian Center – Ocala Summer Series wrapped up this 4th of July afternoon with the $15,000 WEC Ocala 1.40m Jumper Classic. A field of 24 entries challenged a course designed by Peter Grant of Canada. The course presented a winding track through the WEC Grand Arena that included a double combination and a triple combination. Seven entries managed a clear first round and five jumped double clear, but it was Kim Farlinger and her own Imara that raced to the win with an unbelievably fast jump-off.

Kim Farlinger of Wellington, Florida and Imara (Dutch Design x Wamara) delivered a remarkable first round course, stopping the clock at 81.483 seconds, well under the time allowed of 85 seconds. Farlinger liked the first-round course, “It was a nice first round track. It was similar to the Grand Prix last night, where I was fortunate enough to be in the class, so I had an idea of what to expect today. She is a big mover, so I did seven to the plank jump instead of eight. She is much happier to jump off of a gallop which really helped me with the time allowed.”

Farlinger and the eight-year-old KWPN mare advanced straight to the jump-off. “My plan was to run as fast as I could, really. Sharn is always fast, and I knew he was leading, so I thought if she jumped clear, I might as well give it a go. I did six strides in the last line and the entire time that I was doing it, I thought it was a terrible idea, but she left it up which was amazing.”

Farlinger and Imara soared through the last line leaving every jump up, to stop the clock at 36.705 seconds to earn the win.

Right behind the winning pair, was Sharn Wordley and Esmee the 12-year-old Warmblood mare. Wordley and Esmee found previous success in last week’s class placing eighth. Olympic rider, Wordley and Esmee delivered a beautiful first round 82.438 seconds. The pair advanced straight to the jump-off taking multiple inside turns, stopping the timers at 37.238 seconds, just behind Farlinger and Imara.

Diego Perez Bilboa and Wyndmont Inc’s Tinker Bell produced an impeccable fast first round, stopping the clock at 79.297 seconds, well within the time allowed. Bilboa and Tinker Bell jumped-off immediately, galloping through the entirety of the course to stop the clock at 39.136 seconds to round off the top three.

Congratulations to all entries on another fantastic week of equestrian sport and Happy 4th of July!