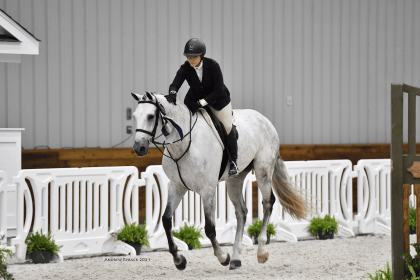 4th of July, Sunday featured a field of 24 entries contesting the $15,000 WEC Ocala 1.40m Jumper Classic. The course presented a winding track through the WEC Grand Arena that included a double combination and a triple combination. Seven entries managed a first clear round and five jumped double clear, but it was Kim Farlinger and her own Imara that raced to the win with an unbelievably fast jump-off.

Kim Farlinger of Wellington, Florida and Imara (Dutch Design x Wamara) delivered a remarkable first round course, stopping the clock at 81.438 seconds. Farlinger and the eight-year-old KWPN mare advanced straight to the jump-off, leaving out a stride from to the double combination to the last fence to stop the clock at 36.705 seconds to earn the win.

Vanderveen and the 12-year-old Holsteiner gelding delivered a flawless first round, soaring to the top of the standards to stop the clock at 78.246 seconds, well under the time allowed of 82 seconds. Vanderveen was ready to go as fast as possible. “He [Bull Run’s Prince Of Peace] really likes these big rings where he can really run. This is a real strength of his. With there being so many in the jump-off, it was good for him to just go on a flat gallop and let it out to build up his confidence,” said Vanderveen.

Vanderveen and Bull Run’s Prince of Peace started the jump-off strong and fast, galloping from fence one to fence two in just eight strides. Vanderveen rolled through the rest of the course, never having to pump the brakes. “On a straight flat gallop, he is amazingly brave and will try from anywhere.” Vanderveen and Bull Run’s Prince of Peace flew to the Lugano Diamonds oxer, to stop the timers at 42.076 seconds.

Earlier Saturday afternoon, the WEC Grand Arena saw a field of 33 entries to contest the $10,000 WEC Ocala Futures Prix. Sixteen entries found clear first rounds but only seven managed to jump double clear, with Olympic rider, Santiago Lambre and his own The Diamant Rose Z taking the class by almost three seconds in the jump-off. Lambre and his new mount The Diamant Rose Z were the last entry to enter the ring in the class, delivering a jump-off with tight turns and forward distances to stop the clock at 36.463 seconds, more than two and half seconds faster than second place finishers Roberto Daza and Bella Olympic.

Week IV’s Derby Friday took over the CaptiveOne Advisors Indoor Arena as 40 horse-and-rider combinations contested the $12,500 WEC Ocala 3’6”-3’9” Hunter Derby and the $10,000 WEC Ocala 3’ Hunter Derby. Courses for the two classes were designed by Doug Russell, with both courses showcasing inviting natural obstacles with three high options in each class.

Earlier Friday morning, twenty-five entries gathered to the CaptiveOne Indoor Arena this morning to compete for the blue ribbon in the $10,000 WEC Ocala 3’ Hunter Derby but it was Clair Kellner and Caligua that claimed the top spot. Kellner and Caligua the nine-year-old Holsteiner gelding owned by Suzanne Cayatte, performed a stunning first round, taking all three high options to earn the highest first round score of 90. Kellner and Caligua returned for the handy taking multiple inside turns, while jump all three high options, to earn a score of 89.5, for a two-round total of 179.5.

Feature class action for Week IV of the World Equestrian Center – Ocala Summer Series kicked off Thursday morning with the $15,000 WEC Ocala Welcome Prix. A playing field of 54 horse-and-rider combinations but only nine entries produced a clear jump-off round.  Not one pair could best Tracy Fenney and MTM Apple. Fenney, of Flower Mound, Texas, and the 10-year-old Danish Warmblood mare, MTM Apple, navigated a clear first round, soaring to the top of the standards, stopping the clock at 80.966 seconds, just under the time allowed of 81 seconds. Fenney and MTM Apple advanced straight to the jump-off rolling through the short course with inside turns and flat gallop to stop the clock at 42.573 seconds for the win.

Congratulations to all entries on another successful week at World Equestrian Center – Ocala!