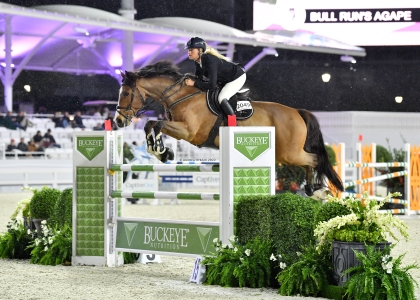 Week III of the 2022 Winter Spectacular Show Series showcased the $10,000 Buckeye Nutrition Futures Prix under the lights on Friday in the WEC Grand Arena. The Futures Prix features riders or horses who are moving up to the higher levels of competition, and to help gain experience the class was held in a different atmosphere. FEI Level III course designer, Anderson Lima designed the inviting tracks that featured three double combinations. Eleven entries managed clean first rounds, and six jumped double clear but it was Kristen Vanderveen and her own Bull Run’s Agape (Lavall I x Kenza B) that took top honors.

Vanderveen and the now 10-year-old Holsteiner gelding produced a faultless first round, stopping the clock at 76.686 seconds, well within the time allowed of 79 seconds.

Vanderveen thought that the Futures Prix being held under the lights was very helpful, “I am so excited that World Equestrian Center decided to host this class under the lights. I think it is fantastic for young horses and upcoming riders. If you had a hiccup in the Grand Prix last week, this was a good reset to give your horse confidence.”

Vanderveen and the speedy Bull Run’s Agape advanced straight to the jump-off galloping through the entirety of the course, not pumping the brakes once to stop the jump-off clock at 39.974 seconds, more than three seconds faster than the second place finishers.

Vanderveen has a special place in her heart for Bull Run’s Agape, “I have owned Bull Run’s Agape since he was a foal. I actually rode his half-sister for quite some time. The breeders ended up giving me the last foal out of the same mare. He’s super special to me because he is the first horse I brought up from the beginning. He has a fantastic attitude and loves to go fast. Tonight, I finally let him go. We have been focusing a lot on control, but because this class was unique and under the lights, I wanted to see how he would handle it and he was incredible.”

David Jennings and The Follow Me Group’s Follow Me (For Edition x Georgia) earned the second fastest time in last night’s $10,000 Buckeye Nutrition Futures Prix. Jennings and the 15-year-old Hanoverian gelding navigated a smooth first round, leaving all rails up to capture a time of 78.906 seconds, just within the time allowed of 79 seconds. The pair advanced straight to the jump-off taking tidy inside turns to secure a jump-off time of 43.030 seconds to ultimately earn second.

Laura Sloey and Beijing LS LA Silla rounded out the top three in last night’s $10,000 Buckeye Nutrition Futures Prix. Sloey and the Warmblood stallion produced a quick first round, stopping the first-round clock at 77.524 seconds. The pair jumped-off immediately galloping through the entirety of the course to stop the timers at 44.918 seconds.

Abrahamson and Boudika Ideal Home were the last pair down the ramp into the WEC Grand Arena to contest the $12,500 WEC Ocala 1.40m Jumper Classic. Abrahamson and the 15-year-old Belgian Warmblood mare produced a smooth first round in 75.746 seconds, well within the time allowed of 80 seconds.

Abrahamson has a routine for her spicy mare, “Boudika is a very seasoned horse. I have had her for about five or six years. I’ve jumped three stars with her and some pretty big classes in the past. Now that she is older, she is just backing down to this level. Boudika does have a routine. Whenever she jumps super well her ego sometimes gets the best of her. So, now she will go home for a couple of weeks and relax in her field. I really only flat her and jump small courses at home because she tends to get a little full of herself.”

Abrahamson and Boudika Ideal Home advanced straight to the jump-off, “I didn’t get to watch the other rider that went clean, so my plan for the jump-off was to just keep her calm. I did end up doing an inside turn to the last jump, which I wasn’t supposed to do but luckily she is a seasoned horse, so she did it easily.” The pair delivered a fast and smooth jump-off in 43.274 seconds to secure first.

The only other clean first round was captured by Frank Owens and DS Holdings LLC’s Just Jeremy ES (Kannan x Titania). Owens and the eight-year-old KWPN gelding navigated a lovely first round, jumping each fence with ease to secure a time of 79.200 seconds. The pair advanced to the jump-off creating a nice round to stop the clock at 45.566 seconds.