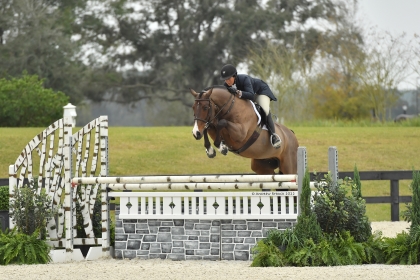 Steege and the elegant 10-year-old Belgian Warmblood gelding navigated a foot-perfect first round to earn the class’s highest first round score of 99. “I was thrilled with my first round; we got a base score of 95 and an additional four with the high options. Maybe they’ll give me 100 if I smiled a bit bigger,” laughed Steege.

Steege and Lafitte were the last pair to return for the handy. The pair delivered a beautiful, rhythmic round that featured tidy turns and all the high options to secure a score of 92 for an overall score of 191.

Steege was thrilled with Lafitte De Muze, “He felt incredible. He landed all of his leads and was super rideable. He was with me every step of the way. Our relationship has developed to the point where it’s almost like he knows what’s going to happen before it happens. It’s second nature and we are thinking as one.”

“We are so lucky to have this facility and in particular, this ring to develop our hunters. Lafitte has goals of derby finals and I hope to one day win derby finals with him. I just think that there’s nothing else that can simulate that more than the courses at WEC. The jumps that they built here and the amount that they have and the effort that everyone puts into decorating the course. The atmosphere and the ambiance of this stadium is something that we don’t get to experience very often, so I feel so lucky to have it here,” said Steege.

Third place was earned by Morgan Ward and Bruce Green’s Cypress (Quidam De Revel SF x Kassini). Ward and the now 15-year-old Dutch Warmblood gelding produced a lovely first round, jumping all four high options to earn a score of 87.5. The pair returned for the handy, delivering a beautiful round to secure a score of 91, for a two round total 178.5.

Thirty-one horse-and-rider combinations gathered at the WEC Stadium early this morning to vie for the top prize in the $15,000 WEC Ocala 3’ Open Hunter Derby. Megan Young and Lee D. Cesery’s Comanche that earned the highest overall score of 180.5 for the win.

Young and Comanche are coming off of a recent 3’ Hunter Derby win at the Ocala Fall Show Series. The pair continued their success today, with a flowing first round, opting for all four high options to earn the class’s highest first round score of 91.

“I think Comanche really enjoyed the Stadium. I have done some bigger classes with him before but this was our first time that we have gone in the Stadium here,” said Young.

Young and the 14-year-old Warmblood gelding were the last pair to return for the handy, producing a foot-perfect first round, while taking a very tricky inside turn that only a few competitors attempted to secure a score of 89.5, for a two-round total of 180.5 for the win.

Dorothy Douglas and Abigail Davenport’s MTM Exceptional (Casall Ask x Rheinsberg) captured another second place finish in the $15,000 WEC Ocala 3’ Hunter Derby. The pair has secured the second place spot during Week’s I and II of the Ocala Winter Spectacular Show Series. Douglas and the 13-year-old Holsteiner gelding navigated a smooth first round, jumping all four high options with ease to earn a score of 89.5. The pair came back for the handy seamlessly flowing through the course while opting to jump four high options to earn a score of 88 for a total score of 177.5.

Third place finisher Timothy Maddrix and Sarah Campbell’s Shutterbug. Maddrix earned first place honors during Week I’s $15,000 WEC Ocala 3’ Open Hunter Derby aboard his other mount The Irish. Maddrix and the stylish Czech Warmblood gelding produced two beautiful rounds, earning a first round score of 89.5 and a handy score of 89 for an overall score of 175.5 to round out the top three.

The $15,000 WEC Ocala Jr/Am Hunter Derby saw a competitive field of 37 entries hunt for the win over tracks built by Joe Carnicom (USA). Scores soaring into the 90s but it was Isabel Harbor and IMH Equine, LLC’s Fitz (Numero Uno x Kootje) that produced two flawless rounds that caught the judges eye.

Harbour and the 14-year-old Dutch Warmblood navigated a lovely first round, jumping each fence with ease opting to take all four high options to earn a score of 86. “The first course rode really well. I really enjoyed how open it was. The stadium is such a great ring for derbies, we really get to show off their movement.”

Harbour and Fitz were the second to last pair to return to the handy, “I love the handy. They are my favorite. I always try to find some crazy turn that no one else is going to attempt and I did. After the second to last fence, the oxer, I was walking and thought I could turn inside the pond. On my first horse, Lost Art, I had an unfortunate mishap at the trot fence so I thought why not give the inside turn a short and it worked out well. On Fitz, I knew he would do it and he was fantastic of course.”

Harbour and Fitz delivered an impeccable round, while jumping each high option to secure the class’s highest handy score of 90 for a two round total of 176.

Laura Van Rooyen and her own Biarritz (Berlin x Olavsca) captured the second place finish in today’s $15,000 Jr/Am 3’ Hunter Derby. Rooyen and the 14-year-old Dutch Warmbloood gelding created a smooth first round, jumping all four high options to earn a first-round score of 88. The pair came back for the handy, producing a smooth round to earn a score of 86 for an overall score of 174.

Addison McQuaker of Schomberg, ON and her own Golden Ticket (Stakkato Gold x Cindy Crawford) rounded out the top three in today’s class. McQuaker also earned a top three finish during the first week of the Ocala Winter Spectacular Show Series. McQuaker and the seven-year-old Oldenburg gelding navigated two stunning rounds to earn a first round score of 89 and a handy score of 83 for an overall score of 172.

Before the start of the handy round in the $20,000 WEC Ocala 3’6”-3’9” Hunter Derby, the prestigious Style of Riding Award was presented to Tracy Fenney for her classic style and her sportsmanship. The Style of Riding Award is generously presented by Bill Rube to be awarded to the rider who best displays the American Style of riding in the ring and sportsmanship outside of the competition arena. The recipient serves as a role model for preserving the integrity and tradition of equestrian sport. “This award is very special to me because the recipient of this award pays it forward both in and out of the show ring,” says Rube. Fenney received an elegant duffel bag and wore a white rose corsage on her lapel throughout the handy round to signify her achievement.