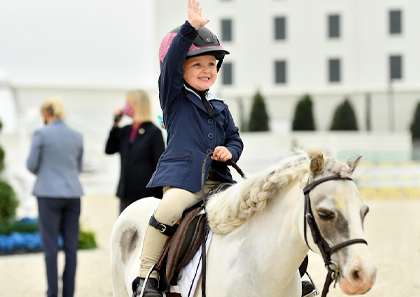 Thursday’s $20,000 Welcome Prix 1.45m saw an exciting win for amateur Jordan Petersen and Derek Petersen’s Diamant’s Legacy (Diamant de Semilly x Courtney Love II). The duo had a strong start to the World Equestrian Center — Ocala Winter Spectacular 2021, taking 2nd place in the $20,000 Welcome Prix 1.45m during Week 1 and 4th place in the $75,000 WEC Grand Prix 1.50m during Week 2. On Thursday, Petersen and the 12-year-old Oldenburg stallion managed the only double clear rounds of the class, leaving all rails the up in the jump-off in just 38.876 seconds for the win.

We were delighted to include the prestigious Style of Riding Award in our awards ceremony on Derby Friday. The Style of Riding Award is generously donated by Bill Rube to be awarded to the rider who best displays the American Style of riding in the ring and sportsmanship outside of the competition arena. The recipient serves as a role model for preserving the integrity and tradition of equestrian sport. “This award is very special to me because the recipient of this award pays it forward both in and out of the show ring,” says Rube. The Style of Riding Award includes a beautiful leather embroidered duffel bag along with a white corsage to be worn on the rider’s lapel during the handy round of the class. The award is presented before the handy round of the $20,000 WEC Hunter Derby 3’6″ – 3’9″, the $15,000 WEC Hunter Derby 3′ Open or the $15,000 WEC Hunter Derby 3′ Non Pro each week throughout the remainder of the World Equestrian Center — Ocala Winter Spectacular 2021. Last week, the the Style of Riding Award was presented during the $15,000 WEC Derby 3′ Open to Dorrie Douglas for her style and sportsmanship.

Friday’s $20,000 WEC Hunter Derby 3’6″ – 3’9″ included 19 entries vying for the win, but it was Samantha Schaefer and Madeline Schaefer’s In The Know (Arkansas x Cavelle) who earned top honors with a pair of scores in the 90s. The duo set the standard for the class early in the order with a breathtaking first round, taking all four high options for a score of 91. Schaefer and the 11-year-old Warmblood gelding worked together seamlessly to find distances and inside turns in the handy round, earning a score of 93, bringing their overall total to 184 and sending them straight to first place.

Competition was fierce in Friday’s $15,000 WEC Derby 3′ Open with the top three placings separated by just one point, but it was Jeff Gogul and Abby Wagner’s No Doubt (Nerrado x Abba II) that nabbed the win. The 8-year-old Holsteiner gelding is a new mount for Gogul, but the pair were completely simpatico in the first round, finding every distance perfectly in stride with a lovely rhythm and taking all four high options for a score of 88. Gogul and the striking bay gelding showed off their skills in the handy round, taking inside turns to fences 3, 6 and 7, and jumping all for high options for a score of 92, bringing their total score to 180 and sliding into 1st place.

Christopher Coberley found great success in Friday’s $15,000 WEC Derby 3′ Non Pro for the second week in a row, taking 1st and 2nd place aboard Fox Meadow Farm’s No Introduction and Havens Schatt’s Actender PS (Action Breaker x Conpila). Coberley and No Introduction earned impressive scores of 91 and 92 for an overall total of 183, topping the class, while he and Actender PS earned a pair of 88 scores for a 2nd place finish.

Thirty-two entries took to the WEC Grand Arena Saturday night for the $75,000 WEC Grand Prix 1.50m. Eight entries jumped a clear first round and advanced to the jump-off, but in the end it was Mark Bluman that captured the win aboard Daniel Bluman’s Mylords Bandit Del Keroytin (Edjaz Van’t Merelsnest x Byssa Del Keroytin). The 9-year-old Belgian Warmblood gelding is a newer ride for Bluman, but has experience in the 1.40m jumpers. Bluman and Mylords Bandit Del Keroytin secured a spot in the jump-off early in the first round, jumping clear in a time of 76.045 seconds. The duo picked up pace on the short course and galloped through the timers with all rails up in 38.606 seconds, ultimately taking the win.

Saturday also saw 28 entries in the $7,500 Futures Prix 1.40m. Seven entries managed double clear rounds, although none could catch Tom Foley and The Helios Group’s Felex (Ustinov x Milexa). The 10-year-old Warmblood gelding is a new mount for Foley, but has experience in the 1.40m jumpers. Foley and the fiery black gelding jumped a fast, clear first round in a time of 75.347 seconds before advancing to the jump-off. The pair kept their pace on the short course and stopped the clock with a clear round at 38.132 seconds to win the class.

Judy Rutkowski and her own Spanish Harlem (Namelus R x Eamelusiena) took home the blue ribbon in the $2,500 Non Pro Hunter Derby 2’6″. The duo laid down two beautiful rounds to top the class and also earned the Reserve Champion title in the NSBA Hunter 2’6″.