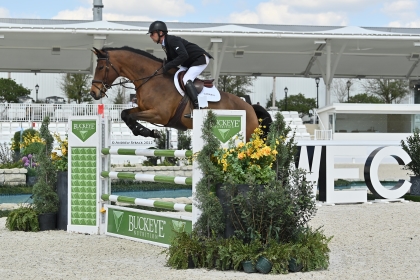 Ocala, FL – Fifty-one up and coming horse-and-rider combinations took to the WEC Grand Arena this afternoon to contest the $10,000 Buckeye Nutrition Futures Prix. FEI Level II course designer Colm Quinn (IRL) designed the open tracks that allowed nearly half of the class to create a clear first round. The jump-off was fierce as 23 entries galloped for the fastest time, but it was Richard Rinehart and Ron Caraway’s Vincent (Van Gogh x Nirande) that snagged the win toward the end of the order.

Richard Rinehart (USA) and Vincent entered the WEC Grand Arena toward the end of the order where they navigated a seamless first round in 80.690 seconds. Rinehart and the 10-year-old Dutch Warmblood gelding advanced straight to the jump-off trying to best second place finisher’s Tiffany Hammack and Ghana FS Z’s fast time.

“Vincent is an extremely careful horse. I’ve been riding him for six months now and he is owned by Ron Caraway, whose kids rode when they were younger, and he still has the bug. I was very happy with Vincent, we have been working on going faster when the jumps are bigger and it was fun to have a chance to open up his stride,” said Rinehart.

Rinehart had a straightforward plan for the jump-off, “My plan was to win. My wife won the 3’ Open Hunter Derby yesterday, so I had to keep up,” laughed Rinehart. “All of the times were right up there with one another, so I decided to do two less, and do the seven down the first line. I was a little concerned for the turn after, but Vincent was great, and stayed right with me.”

Rinehart and Vincent kept their fast pace during the entire short course to stop the clock at 30.049 seconds for the win.

Tiffany Hammack (USA) and Foxwood Farm’s Ghana FS Z (Glasgow W VH Merelsnest x Uschi-Vira) produced a fast first round in 76.923 seconds, well under the time allowed of 88 seconds. Hammack and the nine-year-old Zangersheide mare went straight to the jump-off capturing a time of 30.693 seconds, that held rank for a decent portion of the class.

Rowan Willis (AUS) and Peter Moore’s Copain rounded out the top three in today’s $10,000 Buckeye Nutrition Futures Prix. Willis and Copain produced an effortless first round in 80.585 seconds. The pair jumped-off immediately taking tidy inside turns while dashing down the lines to stop the clock at 30.796 seconds for third.

The $12,500 WEC Ocala 1.40m Jumper Classic hosted twenty horse-and-rider combinations vying for the win on Friday afternoon, but it was Santiago Lambre and his own Kind Of Magic that emerged victorious.

Lambre has been on a winning streak during the 2022 Winter Spectacular Show Series earning numerous top finishes in features classes and grands prix. Lambre continued his success with King Of Magic on Friday, navigating a solid first round in 70.295 seconds.

Lambre and Kind Of Magic advanced straight to the jump-off, rolling through the turns while jumping each fence with ease to stop the clock at 41.020 seconds.

Third place honors went to James Arkins and his own Joevaro R. The pair delivered a seamless first round in 72.674 seconds and a fast jump-off in 42.440 seconds to round out the top three in Friday’s $12,500 WEC Ocala 1.40m Jumper Classic.