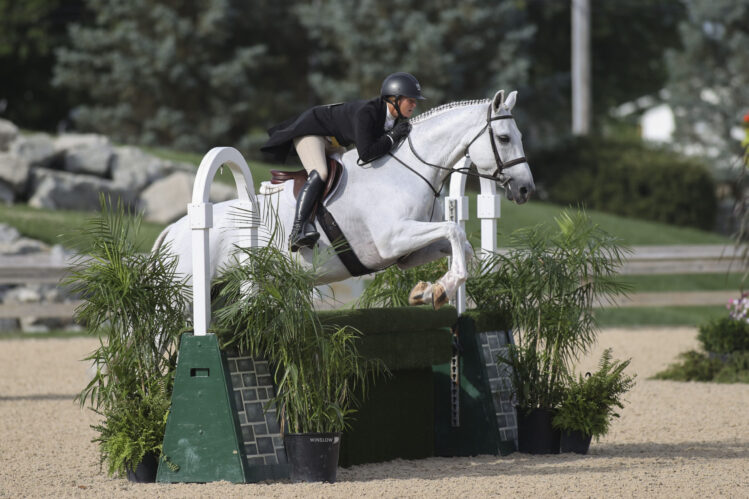 The afternoon’s $12,500 WEC Hunter Derby 3’6”-3’9” Hunter Derby saw a field of eight entries. Scores soared into the mid 80s, but it was Melissa Donnelly and Corlando 49 (Cartani x Olanda I) of Just A Folly Farm, in Oxford, Michigan who secured the win. Donnelly and the the elegant fifteen-year-old Holsteiner gelding were unbeatable in tonight’s event, completing the first round of 84 and a handy round of 86.5 to earn a  final winning score of 170.5.

Donnelly chatted with us after the class about her game plan for the course and securing a win in the class. “The plan for this class was to show off his best features. He turns really well and really sharp. Cory (Corlando 49) can slice and dice a jump really easily. We looked for the places where we could show him off best in the sharp turns and gallop. His routine beforehand is really simple. He definitely knows when it is Derby Friday!”

Genn and Dante’s Inferno delivered a consistent set of rounds to earn a pair of 85s and an overall score of 170, which would secure them a second place finish.

Tess M. Fortune and MVP rounded out the top three. The chestnut Thoroughbred jumped to a first-round score of 82 followed by an immaculate handy-round score of 86. The pair earned a final combined score of 168.

Hat Trick for Beisel in the $10,000 WEC Hunter Derby Open

Fifteen horse and rider combinations took on the main arena for the $10,000 WEC Hunter Derby Open.

Davidson and Beisel delivered a steady first round to earn a score of 84, followed by a breathtaking and polished handy round of 89, earning a combined score of 173.

“He was great today. This was our second Derby together. Out of the three horses I showed, I was most surprised that he secured the win, he is the least seasoned of the bunch, but he really showed the best out of them all today!”

Next on Beisel’s roster was MTM Bentley (Bonaparte Z x Hot Cherie P), this successful pair is no stranger to the winners circle at WEC. They scored a strong first-round  of 78. MTM Bentely and Beisel returned to the handy round scoring an 86, totaling a final score of 164 for a second place finish. MTM Bentley and Davidson are both proudly owned by Lori Taylor of Cincinatti, Ohio.

Third place was captured Lavish (Don Bedo x Hauptstutbuch), shown by Beisel and owned by Phyllis Harlow of Ocala, Florida. The two had a first-round score of 78, followed by a handy round score of 87, totaling a final score of 165.

Sarah L. Berkowitz of Nicholasville, Kentucky and the eleven-year-old Dutch Warmblood, Exposant (Cassini x Normandie VI), impressed crowds in the much competitive $10,000 WEC Hunter Derby Non-Pro. Exposant’s stylish jump earned the pair a first round score of 86, and Berkowitz expertly piloted him to a handy round that received a score of 75, for an unbeatable overall score of 161.

We chatted with Berkowitz at the gate after her winning class. “We’re a newer team, I started riding him in September and this was our second Derby. Jeff Gogul helped me a lot today. He is a great person to learn from and an amazing horseman! For approaching this course, I saw a bunch of horses have issues with the first higher option. At the last minute I decided to take the smaller option. I’d rather miss out on a point than loose the whole class.”

Taking second place was Kiera C. Phlipot of Manchester, Michigan and Red Roc (Roc USA x Rhea). Philpot and her mount, Red Roc,  previously won the $10,000 WEC Hunter Derby Non-Pro at WEC Summer 1 in July. Today the team had two great scores, earning an 69 in the first round and a near perfect 88 in the handy. Totaling to an honorable 157 final score.

Landing in third place was Colleen Pettengill and Tyamo (Tygo x Hieramia B Z). The duo scored the first round of 75, followed by a handy round of 80. Pettengill scores totaled 155 to round out her third-place finish.