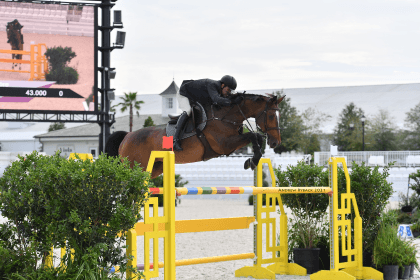 The final feature class of the World Equestrian Center – Ocala NSBA Summer Series hunter/jumper sanctioned horse show kicked off early this morning as 27 entries vied for the win in the $15,000 WEC Ocala 1.40m Jumper Classic. Guilherme Jorge an FEI Level IV course designer created the technical track that featured two tricky double combinations that tested multiple riders throughout the class. Eleven entries managed a clean first round and nine jumped double clear, but it was Olympic rider, Santiago Lambre and his own Doloris that took home the blue ribbon.

Lambre and the 13-year-old KWPN mare have had great success during the World Equestrian Center – Ocala NSBA Summer Series earning multiple top three finishes in featured classes. Lambre and Doloris (Harley VDL x Colinda D) produced a clean first round toward the end of the order stopping the clock at 73.961 seconds. Lambre has had a long partnership with Doloris, “I know her so well. I have owned her since she was five years old. She is very competitive and always wants to win when she steps into the ring.”

Lambre and Doloris advanced straight to the jump-off, starting off on a nice angle to fence one to land left to set them up for a nice gallop to two. The pair soared to the double combination to whip back around to fly through the remainder of the course, stopping the clock at 29.891 seconds for the win.

“It was nice to go toward the end of the class because I was able to watch many riders in the jump-off. My plan was to go fast and make up time in the turns. I took a very tight inside turn back to the second to last jump, I think that is where I had the class,” expressed Lambre.

Vanessa Hood and Take Two LLC’s Cascalretto received second place in this morning’s $15,000 WEC Ocala 1.40m Jumper Classic. Hood and the nine-year-old Holsteiner gelding entered the class near the end of the order producing a clean first round stopping the first round clock at 71.527 seconds. Hood and Cascalretto (Casall x J-Ohara) jumped-off immediately, jumping from fence one to two on a nice gallop to roll to the double combination. The pair galloped through the rest of the course to stop the clock at 30.834 seconds.

Juan M Gallego Martinez and Juan Pablo Betancourt’s Chaverto rounded out the top three during this morning’s class. Martinez and Chaverto delivered a beautiful first round, jumping each fence with ease to stop the clock at 72.600 seconds. The pair advanced straight to the jump-off flying through the course, taking tight turns to stop the jump-off clock at 30.949 seconds, just behind Hood and Cascalretto.

Maddrix and the 12-year-old Dutch Warmblood gelding delivered a smooth and fast, clean first round in 72.198 seconds, well under the time allowed of 79 seconds. “Beau [Skyfall], is owned by an amateur that rides with us, Caroline Dugas. I have probably had the longest partnership with him than any other horse that I have ridden. We bought him when he was seven-year-old from Kris Killam and Helen Jones of Top Horses LLC. We love him so much, he has so much personality and is very fiery,” said Maddrix.

Maddrix and Skyfall (Vigaro x Twi Light) advanced straight to the jump-off, “From one to two in the jump-off a couple of people did seven strides but I ended up doing eight because there was a tall vertical and I wanted him to jump up and over, rather than getting flat. Then I did a long gallop to the green vertical to the double combination where I did ten strides. Other people did nine, but he is so fast and careful off the ground, I still was able to get the time with an extra stride. Then I was super quick back to the next jump and galloped to the last oxer.”

Maddrix and Skyfall soared through the timers to stop the jump-off clock at 34.852 seconds to earn the top prize.

Jennifer Walters and her own Loretto 199 (Lord Ludwigs x Zarina XVII) earned the second place prize in Saturday afternoon’s $10,000 WEC Ocala Futures Prix. Loretto and the nine-year-old Holsteiner gelding delivered a flawless first round to stop the clock at 72.494 seconds. Walters and Loretto 199 jumped-off immediately, galloping from fence one to two to soar to the vertical. The pair flew through the rest of the course taking tidy inside turns to stop the clock at 36.224 seconds.