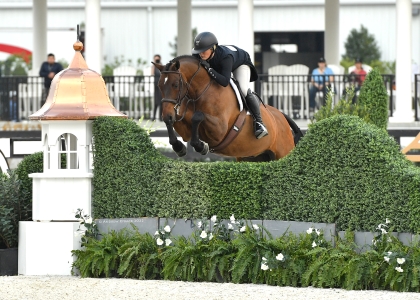 Ocala, FL – Week VII of the 2022 Winter Spectacular Show Series hosted another exciting Derby Friday in the WEC Stadium. Tucker Williams designed the open tracks that encouraged riders to show off their horse’s adjustability and brilliance. Competition was fierce in all three classes, with scores soaring into the 90s.

Morgan Ward and her own Comissario (Calido x Amabilita) bested a field of fifteen horse-and-rider combinations to earn the $20,000 WEC Ocala 3’6”-3’9” Hunter Derby victory for a second time.

Ward and the 15-year-old Warmblood gelding won the $20,000 WEC Ocala 3’6”-3’9” Hunter Derby just a few weeks ago, today they returned with the blue ribbon in mind. They were the first pair to enter the WEC Stadium this afternoon, laying down a foot-by-foot perfect course to earn a high score of 91 from the judges.

Ward adores Comissario, “He is the best. He comes out to do the derbies, then goes right home and gets cookies.”

Ward and Comissario were the second to last pair to return to try their hand at the handy course, where they opted for a challenging track that no other competitor attempted to fence one, “I know Comissario so well at this point and he is so handy, that I took the risk for that turn. It rode beautifully because he landed on the right lead. I think if we were to go around, there was a greater chance that he would have to swap after the fence. Comissario made it easy.”

The dynamic pair flowed through the course, meeting each jump at a perfect distance to earn a score of 91.5, for an overall score of 182.5.

Second place was captured by Carly Campbell-Cooper and John Jamieson’s Capriati. Campbell-Copper and Capriati navigated a two smooth rounds, earning a first round score of 89 and a handy score of 87, for a total score of 176.

Thirty-two competitive hunters took to the WEC Stadium early this morning to contest the $15,000 WEC Ocala 3’ Open Hunter Derby, but it was Belynda Bond from Pilot Point, Texas and Gesture LLC’s Santana that secured two scores in the 90s, for the victory.

Bond and Santana were the first pair in the WEC Stadium to contest Tucker Williams flowing track, delivering a gorgeous round while jumping all four high options with ease to earn the class’s highest first round score of 93.

“Santana is great. He’s been with us for six or seven years now. He usually does the adult hunters with his rider, but when his rider isn’t here, I get to do him in the derbies,” said Bond.

Bond and the 10-year-old Warmblood gelding were the last pair to return for the handy course, navigating a lovely round, seamlessly flowing through the turns to earn a score of 91 from the judges for an overall score of 184.

“I was very happy with the handy. I wanted to make sure we got down the first line. I actually ended up getting down there a little easy, then he turned great. When I was walking the course, I didn’t see the inside turn after the hedges, but when I was in the air, I saw it and he turned just fine. He goes so well in this ring, I love it,” stated Bond.

The $15,000 WEC Ocala 3’ Jr/Am Hunter Derby hosted 35 horse-and-rider combinations who competed for the top prize with scores soaring into the 90s, but it was Jamie Auletto of Tabernacle, New Jersey and her own Idolize (Emilion x Doselli) that took home the blue ribbon.

Auletto and Idolize laid down an effortless first round to earn a score of 92 from the judges.

“Idolize has such a big, beautiful stride, he can just lope down the lines. When I walked this morning, there was a nine and an eight, but then I saw some riders do a nine and ten. So, the course was very adjustable.”

Auletto and the nine-year-old Dutch Warmblood gelding returned for the handy, laying down a lovely round, while jumping each high option with ease for a score of 92, and an overall total of 184 for the win.

“I had a good friend in mind today, Cassie Kahle, who is currently recovering from an injury. I bought a special bracelet at the toy shop here because Cassie loves Disney. I wore it today when I rode and I am super happy we could bring her home a win,” said Auletto.

Ashley Garrido of Hughesville, Maryland and her own Cannonball (Christiano x Leticia) captured the second place finish in today’s $15,000 WEC Ocala Jr/Am Hunter Derby. Garrido and the seven-year-old Westphalian gelding produced a gorgeous first round to earn a 90 from the judges. The pair returned for the handy, putting forth a lovely effort to earn another 90, for a two-round total of 180.

Last week’s $15,000 WEC Ocala Jr/Am Hunter Derby winner, Devin Seek and Citation  (Thunder Van De Zuuthoeve x Argenta VD Berghoeve) rounded out the top three with a first round score of 85 and a handy score of 91 for an overall score of 176.

Before the start of the handy round in the $15,000 WEC Ocala 3′ Open Hunter Derby, Jake Parker stood in for Bill Rube to present the prestigious Style of Riding Award to Timothy Maddrix for his classic style and his sportsmanship. The recipient serves as a role model for preserving the integrity and tradition of equestrian sport. “This award is very special to me because the recipient of this award pays it forward both in and out of the show ring,” says Rube. Maddrix received an elegant duffel bag and wore a pink rose corsage on his lapel throughout the handy round to signify his achievement.