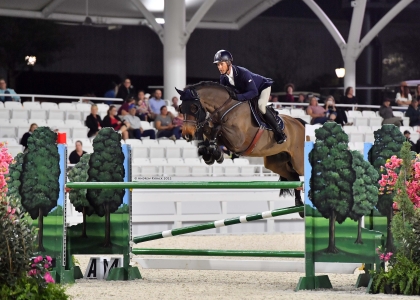 “This class means a lot to me because Chatinus has had four years off due to an injury. We have been bringing him back very slowly. He’s 15-years-old, so it’s kind of a resurrection with a very sweet victory,” expressed Spooner.

Spooner and Chatinus made short work of the first round track delivering a clean jumping effort in 77.222 seconds. “He’s an incredible horse. He went to the World Cup Finals. I only had him for seven months before he got injured, where we won a World Cup Grand Prix or two, then went to the World Cup Finals in Paris. He was on the team in the Nations Cup in Vancouver, which is where he unfortunately got hurt. He doesn’t owe me anything.”

Spooner and the 15-year-old Hanoverian gelding advanced straight to the jump-off, galloping through the lines, “He’s a naturally fast horse. He had a lot of fun to the last jump. Every once in a while, you have a long run at the last jump, of course, Leopoldo is a genius course designer, and this facility is so wonderful. The footing is spectacular and there is nothing to inhibit a bad run. Chatinus just gobbles that up, it’s not very often they get let out of the box like that.”

Spooner and the talented Chatinus soared over the last fence to stop the timers at 38.796 seconds, a time that no other competitor could best.

The second fastest double clear round was secured by Derek Petersen and his own Zechariah 3:9 (Zirocco Blue x Katrina). Petersen and the eight-year-old Dutch Warmblood gelding produced a quick first round in 74.312 seconds, well under the time allowed of 83 seconds. The pair advanced to the jump-off, galloping through the entire course not pumping the brakes once in 39.366 seconds.

David Tromp and David Tromp Show Stables, Inc.’s Incognito (Baltic VDL x Sweet Dream) rounded out the top three in the $10,000 Buckeye Nutrition Futures Prix. Tromp and the nine-year-old KWPN gelding delivered a smooth first round in 77.149 seconds. The duo jumped-off immediately, dashing through the course, not touching a single fence and stopping the clock at 42.026 seconds.

Petersen and Centolino Clasico laid down a blazing fast first round in just 72.144 seconds. Petersen and the nine-year-old Holsteiner gelding out of Centurion went straight to the jump-off, soaring through the entire course in 42.021 seconds, more than seven seconds faster than second place.

“The jump-off rode really well. I tried to be as fast as I could and got a little bit of a long one into the double combination, but I think if I would have pulled, I would have had a rail. In the last line, my plan was to do seven, but I decided to stay on the safter side and ask for the eight,” said Petersen.

Marcus Grunethal spoke about the winning horse, “He’s nine-years-old. He is owned by a dear friend of ours from Germany and is here to be sold. She sent him over right before Christmas and told me he’s a very good horse but he’s not very fast. Centolino Clasico definitely proved us wrong, because he’s been going pretty fast, and we haven’t really tried his all yet.”

Keely McIntosh and Jenny Booth’s Inne Van De Plataan secured third place in Friday’s $12,500 WEC Ocala 1.40m Jumper Classic. McIntosh and Inne Van De Plataan navigated the course for a smooth first round in 72.990 seconds. The pair went right to the jump-off, speeding through the track to stop the final timers at 44.872 seconds, with one rail down.