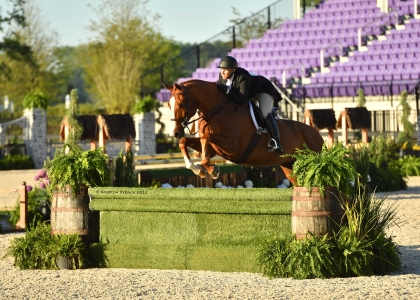 Ocala, FL – This week’s Ocala Sunday spotlight shines on the owner of Sierra Run Farm, Jenny Miller of Jacksonville, Florida. Miller established the hunter/jumper training and boarding business in 2003. Miller shows at World Equestrian Center – Ocala 26-weeks out of the year and calls Ocala her second home. We caught up with Miller to learn more about her riding career and Sierra Run Farm.

I started riding when I was a kid. My dad took me to a western pony riding place, when I was four or five years old – it was the biggest mistake he’s ever made.

When I was six years old, I remember walking into a tack room and seeing saddles without horns. At that point, I had only ever trail ridden, so I didn’t know horses could jump. After that, there was no going back.

My family never had horses. My mom was too afraid to touch them at the time and my dad had no interest, except for clapping and saying good job. I just knew I wanted to ride and would do anything to make it happen.

During my junior career I rode with Andrew Lustig. I only showed locally and once a year at HITS Ocala back when it was on the grass. I had a medium pony that tried to flip over and a children’s hunter that we made a jumper because she was so wild. I would either win or fall off. I ended up getting some nice catch rides, which helped develop my riding.

As an amateur, I went to the University of South Florida. I ended up riding for Georganne_Powers. Then I rode for Doug Mesker and Jim Giblin. They took me all over the country to places like Kentucky, Cincinnati, and Wellington. I had never been to Wellington before that. I got to ride and show two nice adult hunters.

After I graduated from college, I went professional. I started grooming and barn managing. My first professional job was with Peter Foley and Dale Crittenberger in Virginia. Dale always had professional horses for me to ride. I got to show at Harrisburg, Washington and Devon. I even got to compete at Madison Square Garden. Dale gave me the start to my professional career. Peter is still one of my best friends and mentors.

I also worked for Ian Silich where I did my first grand prix and some big jumpers, until they told me they weren’t going to pay for it anymore because I always had time faults. Hunters had always been my dream and I am too chicken to go fast.

In 2003, I ended up getting badly hurt and had to go back home to Jacksonville. I started teaching some kids while I was recovering from a few surgeries. The kids really wanted to show, and I caved, but they said we needed a barn name and banners to bring to the show. At that point, my plan was to head back to Virginia when I was finally able to ride, so I told the kids they could pick the name. I had a black Lab named Sierra, so they called the farm, Sierra Run Farm. If you look at my logo, it’s a palm tree, a horse and the lab. That’s how Sierra Run Farm started.

Jacksonville isn’t horse country. There are only about five or six hunter/jumper barns, and we are all bursting at the seams. It’s hard to get feed, hay and tack. We have a great vet and two or three good farriers, but there are thousands of horses in the area. The business ended up growing because there was so much demand, so I never ended up going back to Virginia.

WEC: Tell us about some of the horses that you ride.

I personally own Aladdin. I show him in the 3’ derbies. He’s my baby. He’s like a Labrador – super sweet and a cuddler. He’s an amazing jumper but tends to get a touch nervous. He’s still amazing and has been very special for me to ride.

My really good derby horse is MTM Nabilli. He’s been so much fun and opened the door for me to jump some bigger classes.

Having the derbies on Fridays, my customers get really excited. The adults want to watch their horse in the derby as a practice class before they compete on the weekend. So, I get the privilege of showing them on Fridays. I am so grateful to have so many people supporting me and my riding. It’s been so much fun, and I have been able to ride a lot of new horses because of it.

WEC: Tell us about your experience at WEC.

We love WEC. Even though I live and have a farm in Jacksonville, I ended up buying a house here too in Ocala, because my clients don’t want to show anywhere else. We show at WEC 26 weeks out of the year. Between the indoors, outdoors, the stadium and hotel arena, it’s almost like you are showing at four different shows.

It was amazing on Thursday to be able to show during a hurricane. I got here at 5:30am and didn’t step outside until 6:30pm. I would have had no idea it had even rained outside. I would walk from the stable in the perfectly enclosed tunnels to my ring, show then walk back to the stalls. It was incredible and I didn’t have to get wet once. WEC is truly the best place to horse show.

Thank you, Jen for taking the time to catch with us! We are happy to have you here at World Equestrian Center – Ocala!