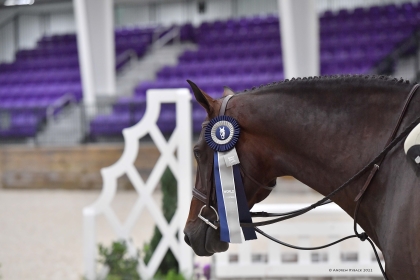 “I really wanted this win. I knew what I had to do and All In Horses Cava is an extremely fast horse. I focused on riding every jump, but I couldn’t go too fast and risk a rail, because I have a tendency of doing that,” laughed Lambre. “He is so naturally quick I was able to gallop around the course and I even added a stride to the last jump.”

“My parents bred him. He is an amazing horse. He has been ridden by many skilled riders as a young horse. Just this year I began riding him, which means a lot to me because he is homebred. This was probably my sixth or seventh show with him and he as been doing so well. After Summer Series we will head to Germany until it’s time to come back for the winter circuit.”

“The course designer gave us some great options in the handy that really allowed us to show our horses off. The jumps were pretty big today, so I was a bit nervous, which I usually never am, but the horses ended up jumping so well, it all worked out.”

Maria Rasmussen started her Friday with a victory in the $10,000 WEC Ocala 3’ Open Hunter Derby aboard SVF James.

“He’s currently a Pre-Green horse. We have been preparing for the Incentive Hunter Finals. He has so much scope and he’s so brave, I think he’s going to be an incredible Junior Hunter. He tries super hard and loves his job.”

Lilly French and Calrissian rose to the top in the $10,000 WEC Ocala 3’ Jr/Am Hunter Derby.

“I have been riding Calrissian since March. This is our fourth show together, I started showing him in the beginning of Summer Series. He is so much fun. I am so lucky to be able to ride and show him. It’s a privilege to be able to ride a horse like him. He’s so brave and gives you his all every time he steps in the ring.”

“He is a super competitive and brave horse. He has won a few FEI classes already. He loves this venue and tends to really show his speed in that arena. Even if you add strides in the jump-off, he is so naturally quick it doesn’t matter. I think he is going to do some big classes in the future. He will do the Saturday night grand prix this week and hopefully some FEI grands prix soon.”

“He is an incredible horse. He continues to get better and better with each class. In the next two weeks, I hope to do some bigger classes and progress.”

Congratulations to all competitors on another great week of competition!