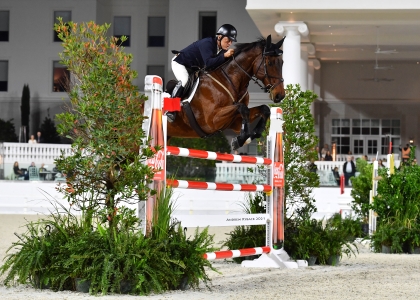 World Equestrian Center – Ocala hosted an exhilarating night of equestrian sport as thirty-one entries took to the WEC Grand Arena under the lights to contest the $75,000 Coca-Cola Beverages Florida Grand Prix. FEI Level III course designer, Catsy Cruz of Mexico designed the technical tracks that featured three combinations that tested multiple riders throughout the night. Fifteen entries managed a clean first round and ten jumped double clear, but it was Olympic Gold Medalist Will Simpson and his own Chacco P (Chacco Blue x Cera P) that galloped away with the top prize.

Simpson has had a stellar week, winning Thursday’s $15,000 WEC Ocala Welcome Prix aboard Whoop De Doo. The Olympian produced clean rounds on both Whoop De Doo and Chacco P in tonight’s $75,000 Coca-Cola Beverages Florida Grand Prix, but Chacco P delivered a time that no other could best.

Simpson and Chacco P navigated a fast and smooth first round, easily clearing each fence to stop the clock at 76.145 seconds, well under the time allowed of 82 seconds.

Simpson was energized by the atmosphere at WEC, “Tonight felt like it was big time with the lights and the crowd. Chacco P walked in the ring, took a look at the lights and I could feel that he was ready to go. He knew he better put on his best performance.”

Simpson and the 12-year-old Mecklenburg gelding returned for the jump-off, “I walked ten strides in the first line and thought if I had to do nine, I could probably get it done. Then Tracy went in. After Tracy pulled out an eight in the first line, I knew we had to put the hammer down early. I added one to the combination, because Chacco P is 18 hands, so I couldn’t really run to the combination. Then in the last line I saw Tracy wait for the ten, so if I got the nine done, I knew I would have her time. I didn’t see it until stride seven and at that speed, I was thinking “come on baby show up” and it did thankfully.”

Simpson and Chacco P flew through the jump-off timers stopping the clock at an unbeatable 36.815 seconds.

“This was a great way to start the holiday season. My horse was amazing, the atmosphere was exciting, and the thrill was unbelievable. It is amazing to have an atmosphere like this again. That is a big part of show jumping. The horses feel it and the riders feel it. It is so nice to be able to compete at a big-time facility like this.”

Just behind Will Simpson and Chacco P, was Aaron Vale and Michael Connor’s Boreale De Talma (Quick Star x Reggae De Talma). Aaron produced fault free first rounds on all three of his mounts in tonight’s $75,000 Coca-Cola Beverages Florida Grand Prix. Vale and the 10-year-old Selle Francais mare delivered a smooth clean round, stopping the clock at 78.692 seconds. Vale and Boreale De Talma were the last pair to enter the jump-off, flying from fence one to two to swiftly roll-back to three. The pair soared through the rest of the course stopping the clock at 37.643 seconds to earn second place.

Third place honors went to New Zealand’s Sharn Wordley and Fernando Cardena’s Valentine Car (Son of Juan Car x Sofia Car). Wordley and Valentine Car produced a superb first round, clearing each fence with ease to stop the clock at 79.128 seconds. Wordley and the 12-year-old Warmblood gelding returned for the jump-off starting on a nice angle from fence one to two. The pair rolled right around the Christmas tree to the large red oxer. Wordley and Valentine Car galloped through the remainder of the course, walking down the last line in nine strides to stop the jump-off clock at 37.951 seconds to round out the top three.

An additional $5,000 was awarded to the fastest four-faulter of the $75,000 Coca-Cola Beverages Florida Grand Prix. Morgan Ward and Morlynn Farm’s Cesar De B’Neville received the award for a time of 77.135 seconds with one down.

Harold Chopping and Geronimo SCF received the $5,000 ‘Luck of the Draw’ award.