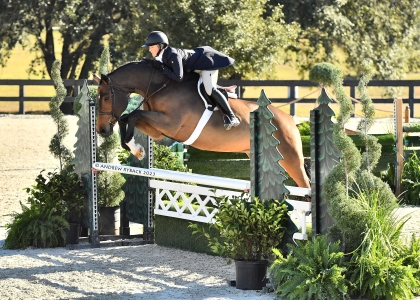 Fifteen talented combinations vied for the top prize in the $20,000 Golden Ocala Golf & Equestrian Club 3’6”-3’9” Hunter Derby with scores soaring into the high 90s. The spectacular tracks gave competitors numerous options for striding and handy turns, allowing riders to show off their horse’s individual style, but it was Samantha Schaefer and her tried-and-true mount, In The Know (Arkansas x Cavelle) that wowed the judges.

Schaefer and the 13-year-old Warmblood gelding owned by Madeline Schaefer secured a high score of 93 for a flawless first round.

Schaefer commented on Hern’s elegant courses, “When I was first learning the course, I was a tad stressed because there was a lot to remember. The ring looked stunning. They really put a lot of effort into the course today and it rode very nicely. I am not much of a course walker, but today, I had to go out there or else I would have gotten lost in this beautiful sea of greenery,” laughed Schaefer.

“It was a nice first course. The jumps were filled out well to impress the horses and I enjoyed the long lines. It was a perfect course that flowed, and everything came right up out of stride,” said Schaefer.

Schaefer and In The Know were the final pair to attempt the handy track, “Sometimes with ‘Spyder’ I go a little crazy. He can do some amazing things when you need him too, but I try not to ask those things too often. We always say, ‘What would Bill [Ellis] do?’ He would always tell me not to blow it and take my time, so I thought of him today. I was still very efficient, but I remembered to not rush anything.”

Schaefer and In The Know floated around the handy track jumping each fence in stellar form to earn a 98, the highest score of the day and an overall score of 191 for the victory.

“Spyder is the absolute best. He’s my best friend and I am so thrilled to start the 2023 Winter Spectacular on such an incredible note. He knows when it is his time to shine and that’s every derby,” said Schaefer.

Johnson and the stunning 13-year-old Holsteiner gelding laid down a foot-by-foot perfect first round to earn a high score of 94 from the judges.

Johnson commented on today’s tracks, “The first course rode well. I really enjoyed the first round; it was nice and flowing. There were a few bending lines that offered different numbers and the judges didn’t seem to mind the variation in numbers. It was nice to just ride the canter.”

“The handy was a blast. There were so many options. I was feeling a little bit rusty this morning to tell you the truth, I haven’t shown in three months. I walked first thing this morning and took a look at some of the turns and decided which way I wanted to jump some of the option fences. When it came time to do it on my first horse, I forgot where I was supposed to go, and I ended up taking too tight of a turn.”

When it came time for Johnson to return on Blue Monday, she knew which track to take, “I picked a track that I thought flowed nicely. I opted to do the bending line from two to three then take left turn, because I didn’t want to go right, right then right again, so I changed it up with the left turn to show off some rideability.”

Johnson and Blue Monday yielded a lovely handy round while jumping all four high options to earn a score of 88.5 for a two-round total of 182.5 for the victory.

Johnson spoke about her seasoned mount, “Blue Monday is perfect. He’s like a giant marshmallow. He does cross poles with his mom and does derbies with me every so often. He knows his job and he’s always so eager to perform well.”

Thirty-four gorgeous hunters gathered at Hunter 1 this afternoon to compete for the top prize in the $15,000 WEC Ocala 3’ Jr/Am Hunter Derby. Augusta Iwasaki secured the victory aboard Chris Iwasaki and Liz Reilly’s Small Moments (Cascadello I x Alcina) after delivering two beautiful rounds to yield a pair of scores in the high 80s.

Iwasaki and the six-year-old Hanoverian mare laid down a flowing first round to earn a score of 89.75.

Iwasaki spoke about the talented young mare, “We have had her for almost a year now. We actually got her at this horse show last year. We have been doing a lot of national derbies and 3’3” green classes. She’s been incredible. This is a lot to ask of any young horse, but she has always stepped up to the plate.”

Iwasaki and Small Moments were the second-to-last pair to return to the handy, “I know her pretty well. So, I picked the track that best suited her way of go and style. She’s strong off the right lead, so I chose a track that benefitted her talents.”

Iwasaki piloted Small Moments to an effortless handy round that earned a score of 89 for an overall score of 178.5 for the blue ribbon.

Before the start of the handy round in the $15,000 UF Veterinary Hospital 3’ Open Derby, the prestigious Style of Riding Award was presented to Hannah Matts for her classic style and her sportsmanship. The Style of Riding Award is generously presented by Bill Rube to be awarded to the rider who best displays the American Style of riding in the ring and sportsmanship outside of the competition arena. The recipient serves as a role model for preserving the integrity and tradition of equestrian sport. “This award is very special to me because the recipient of this award pays it forward both in and out of the show ring,” says Rube. Matts received an elegant duffel bag and wore a pink rose corsage on her lapel throughout the handy round to signify her achievement.