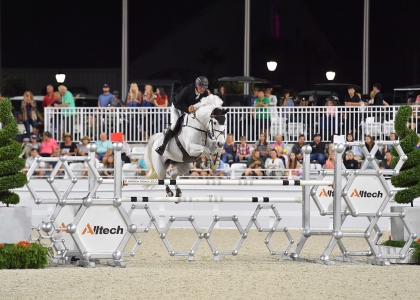 “I’ve only been riding Ennebel [Ennebel Van Het Posthuijs] for two months now. So, it is still a new partnership, and we are still getting to know each other, but she is getting better and better each time,” said Petschenig.

Petschenig and Ennebel Van Het Posthuijs were the sixth to last pair to return for the short-course, “I just thought about going fast. I wasn’t trying to chase anyone because that never works out for me,” laughed Petschenig. “She landed and moved where everything was right there. I landed the combination and three strides after I saw one less and just went for it. It was really long but her scope is incredible. I just rode what I had at every moment in that jump-off,” said Petschenig.

Petschenig and the speedy Ennebel Van Het Posthuijs flew through the timers stopping the at 34.162 seconds, a time that landed them atop the leader board, where they would remain for the rest of the class.

Sharn Wordley (NZL) and his own Casper (Contender x Falubet) landed in the second place spot. Wordley and the spunky Casper navigated a fast and smooth first round in 80.639 seconds, well within the time allowed of 88 seconds. Wordley and the 16-year-old Oldenburg gelding were the seventh to last pair to try their hand at the jump-off, flying from fence one to two to walk down the line in six strides. The pair flew through the remainder of the course to stop the timers at 35.785 seconds.

Samantha Schaefer (USA) and Bonne Vie LLC’s Frasier (Carambole x Bloem) rounded out the top three in tonight’s $75,000 Alltech Grand Prix. Schaefer and the 12-year-old Dutch Warmblood gelding logged a first round time of 83.318 seconds. The pair came back down the ramp to contest the jump-off, dashing through the entire track in a time of 36.730 seconds.

Molly White Ashe and Louisburg Farm’s Berdien received the fastest four-faulter award in the $75,000 Alltech Grand Prix, delivering a time of 80.142 seconds in the first round, with one down.

Founded in 1980 by Irish entrepreneur and scientist Dr. Pearse Lyons, Alltech delivers smarter, more sustainable solutions for agriculture. Our products improve the health and performance of plants and animals, resulting in better nutrition for consumers and a decreased environmental impact.

We are a global leader in the animal health industry, producing additives, premix supplements, feed and complete feed. Strengthened by more than 40 years of scientific research, we carry forward a legacy of innovation and a unique culture that views challenges through an entrepreneurial lens.

Our more than 5,000 talented team members worldwide share our vision for a Planet of Plenty™. We believe agriculture has the greatest potential to shape the future of our planet, but it will take all of us working together, led by science, technology and a shared will to make a difference.

Alltech is a private, family-owned company, which allows us to adapt quickly to our customers’ needs and maintain focus on advanced innovation. Headquartered just outside of Lexington, Kentucky, USA, Alltech has a strong presence in all regions of the world. For more information, visit alltech.com, or join the conversation on Facebook, Twitter and LinkedIn.